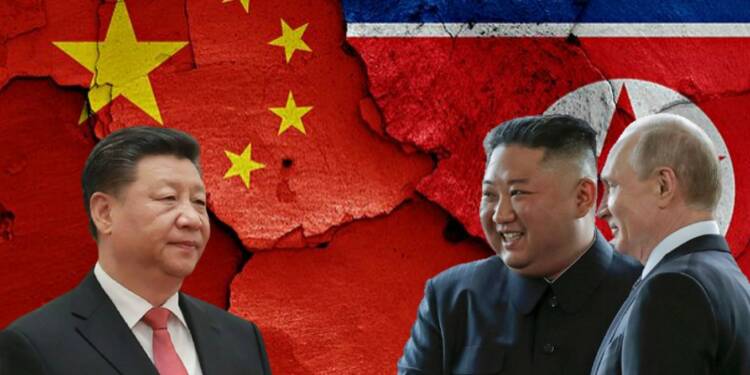 The rift in the relationship between Communist China and North Korea is now an established fact. According to a report released Wednesday by the US Department of Defense (DoD), relations between China and the DPRK have stagnated over the last year as a result of Pyongyang’s extreme COVID-19 prevention measures, which have stifled both trade and diplomatic exchange between the two communist countries. While the rift between North Korea and China is only widening, Russia has slowly yet steadily gained influence in the country. Recently, North Korea is building massive new railway facilities along its tight border with Russia, according to satellite images analysed by NK Pro, as hints of an expected resumption of rail freight commerce with Russia grow.

The defence department also points out that the PLA’s Northern Theatre Command, which is in charge of “border stability operations” near North Korea, has undertaken military drills in preparation for potential crises on the Korean Peninsula. According to the Department of Defense, such contingency operations might range from halting migrant flows during a crisis to launching a full-scale “military incursion into North Korea to retrieve weapons of mass devastation.” In this background, Russia has increased its diplomatic engagement with North and South Korea to snatch North Korea out of the Chinese Communist Party’s clutches.

The research does stress, however, that Beijing is attempting to avoid these scenarios, and that Chinese officials place a high priority on “stability, disarmament, and the lack of US military” near its border. The report’s assessment of China-North Korea ties, according to John Delury, a professor of Chinese Studies at Yonsei University’s Graduate School of International Studies (GSIS), is slightly erroneous. “Stagnation appears to be an overstatement to define the course of China-North Korea ties since Kim Jong Un and Xi Jinping’s fence-mending operation in 2018 and 2019,” he stated.

North Korea had also dealt a blow to Beijing in its increasing divide with China. Dealing a major blow to Chinese vaccine diplomacy, Kim Jong-un led North Korea had reportedly rejected the use of the Chinese vaccines for its vaccination drive. South Korea’s Institute for National Security Strategy (INSS) had reported that North Korea has also shunned away the shipments of AstraZeneca’s Covishield vaccine supplied under United Nations’ COVAX program. Instead, the country is hopeful of receiving Russian made Sputnik vaccine for free in the coming days.

Read more: North Korea is at the brink of extinction but Putin has a plan to save it

Kim Jong-un last month said publicly that North Korea is experiencing food shortages. “The people’s food situation is now getting tense,” he told senior leaders at a meeting. The starvation has intensified after North Korean imports from China saw a whopping 90% drop in May as compared to the last month. Media reports have described the markets in North Korea as currently in turmoil, where the prices of white rice and corn have skyrocketed since the beginning of June.

In late July, North and South Korea announced a surprise and unexpected thaw in ties, as both the countries opened up all kinds of communication lines between each other after close to a year of no official contact. The opening of all communication lines – including military and political liaison came after the leaders of two Koreas, Moon Jae-in and Kim Jong-un exchanged letters with each other recently, underscoring the importance of stability and peace in their peninsula. According to a statement by the South Korean President’s office, Kim and Moon have exchanged personal letters since April which have been aimed at improving ties.

Read more: Reunification of the two Koreas: Putin has begun the completion of Trump’s unfulfilled dreams

The thaw in ties between the two Koreas, however, has not come naturally. In fact, it seems Russia has played a big role in ensuring both North and South Korea begin getting along once again, since the United States under Joe Biden practically has no Korea policy, and China is working overtime to strong-arm Pyongyang into pursuing aggression against Washington DC and all countries which Beijing shares enmity with. North Korea has been resisting China for quite some time now, but there is only so much an impoverished country like itself can do. Now, Moscow seems to have come to the starving country’s rescue.

In the timeline in which Chinese relations with North Korea took a turn to the south, Russia has increased its engagement with the country and has quite about snatched Pyongyang away from China’s influence.

In a big blow to its economy, China is set to be stripped off of preferential tariff treatment from 32 nations