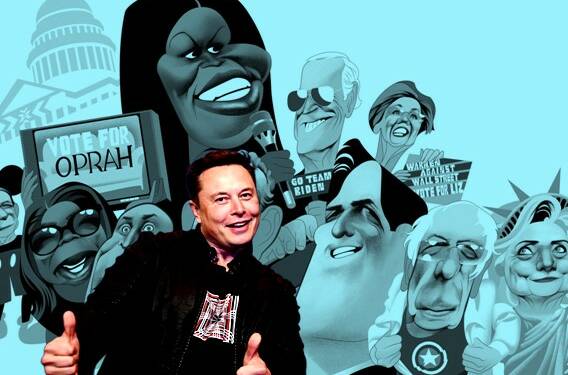 Elon Musk has been picking up innumerable fights ever since he bought Twitter and made it a private company that is controlled by him alone. Twitter, as we all know, has been a bastion of the Left and its allies for years now. It became a town square for liberals to control the narrative. Twitter’s machinery itself had been corrupted by liberals, which targeted conservatives by suspending their accounts, deleting their tweets, or using the infamous ‘shadow-banning’ mechanism. Therefore, radical leftists have all lost their minds. They feel the power slipping right through their fingers.

And then, there’s Elon Musk saying the truth, which does not help calm the tempers of such radicals either. Elon Musk insists he is a liberal — but is viewed as a far-right “bigot” because “woke progressives” are pushing the left to extremes. In fact, Elon admitted to having strongly supported Barack Obama for President.

Elon said, “I strongly supported Obama for President, but today’s Democratic Party has been hijacked by extremists.”

I strongly supported Obama for President, but today’s Democratic Party has been hijacked by extremists

Now, the obvious question to ask is this: Who are the extremists Elon Musk is referring to?

Let me tell you who these maniacs are. They are called ‘The Squad’ and are the most radical sect of the Democratic cult in America today.

The Squad is comprised of six degenerates, all of whom harbour brazen anti-wealth and anti-freedom ideologies. They are:

This sect of far-left extremists is led by ringleader Alexandria Ocasio-Cortez (AOC). So, she landed up having a spat with Elon Musk after he bought Twitter out.

AOC yelled on Twitter, “Tired of having to collectively stress about what explosion of hate crimes is happening (because) some billionaire with an ego problem unilaterally controls a massive communication platform and skews it because Tucker Carlson or Peter Thiel took him to dinner and made him feel special.”

Elon Musk posted a cheeky reply, saying, “Stop hitting on me, I’m really shy.” The reply was accompanied by a ‘blushing’ emoji. To this, AOC replied, “I was talking about Zuckerberg but ok,” but deleted the tweet just under a minute after publishing it.

The Power of The Squad

The Squad supports open borders. Any form of border control is perceived as anti-human by members of this group. Therefore, the Biden administration removed Trump-era border checks, which gave rise to an unprecedented wave of illegal immigration into the United States from Mexico and Latin American countries.

The Squad supports dismantling billionaires and the rich. Last year, Cori Bush, who is a member of the Squad called for abolishing billionaires and taxing the rich to an extent that makes the pursuit of wealth unviable for Americans. Taxes are being increased by the Biden administration. Can you join the dots yet?

The Squad supports radical gender studies and reassignment campaigns. The Squad believes race is a systemic problem in the United States, and that Whites need to bend over backwards to people from other races and ethnicities in order to ensure a level-playing field for them.

In the pursuit of this level-playing field, the Squad has advocated for the police to be abolished, or at least defunded.

It is, therefore, not surprising that Democrats as a whole are panicking after Elon Musk’s buyout of Twitter. The panic of Democrats is best being manifested by members of the Squad. Elon Musk did them good by calling them all ‘extremists’.