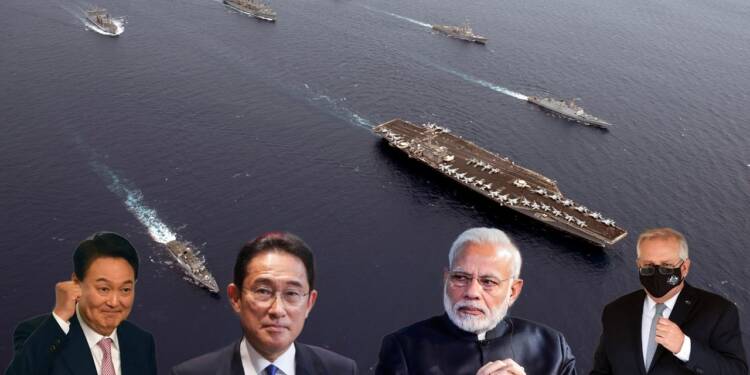 After bracing a victory of fine margins, President-elect Yoon Suk-yeol is setting himself busy to enter the blue house in Seoul on May 10. A cantankerous neighbor to deal with and a belligerent China at hand, Yoon is sure to stumble upon in his initial walk of diplomacy with the known counterparts.

With a rogue regime of North Korea to face, anything less than a strong coalition would just be a talking shop for Seoul. Yoon looks aloof to join hands with the touted global powers that can do nothing of value other than spouting in gesture politics. So, sensing the need to sustain a difficult terrain, Yoon is aiming for a fresh start.

Yoon looking for a fresh start

Throughout his election run, the right-wing leader was vocal about ending his predecessor Moon’s policies of ambiguity surrounding China and the US which was often judged unfit for what South Korea stood for. The need to untangle from Moon’s golden rule of diplomacy stood prominence in Yoon’s playbook. This was well in line with how Yoon started his diplomatic chatterbox with a call to quad leaders which gives signs of how actively Yoon seeks to shift away from the claws of the old line of diplomacy espoused by Moon-Jae-in.

In the past, any leader getting into the realms of power was sure to fall within the US apparatus. Times have changed for good. The initial call to Quad also underscores Yoon’s tenacity to strike a chord with a potent force that can streamline better the Seoul line of politics.

South Korea is finally catching on with the grim reality of today. Moon adhered to a principle that went in accordance with the US line of polity. Seoul was coerced to go tough on Russia and without any second thought the moon administration showed adherence to their western masters.

Now with the reality of inflation pulling down Seoul’s economic prospects, the rallying force of the west and other benevolent partners are nowhere to be seen. South Korea is in shambles.

Read more: Japan and South Korea are burying the hatchet and coming together. Terrible news for China

To upend the issue, Yoon is braving a fresh start to overhaul the dent caused by the previous administration. Moreover, he is aware of the fading economic leverage of the US after the global superpower tried to maximize its success with the Ukraine crisis. A further enhancement of alliance with the US would gift Seoul nothing more than a fence-sitting friend who refuses to get involved when called for help.

South Korea in recent times has bolstered its tie in the Indo-pacific, primarily with Australia. The political signaling is sure directed at China as Seoul seeks to embolden its presence in the Indo-pacific at the cost of angering Beijing. Australia on one hand has been tilting away from China on economic grounds and it’s not late for Seoul to follow suit. The strategy of the two countries runs almost in parallel. Japan also comes as a favorite within the Yoon administration since the newly elected government sent delegates to Tokyo to bolster ties, thereby keeping aside all the bitter tussle of the foregone past related to the wartime employment of labors. The sensitive issue is yet to die down in full, but the Yoon administration is putting high hopes about roping Tokyo by their side. Kishida won’t go for any second thoughts since Tokyo also stands the risk of countering the murderous regime of Kim Jong-un.

When it comes to India, South Korea under Yoon can only buoy the relationship further. Bonded by a rich history and a favorable market that New Delhi offers to Seoul, no ill effect as perceived by the media is in the picture. Yoon has also expressed his desire to attend the next Quad summit as an observer, which gives a cue about his intent to form a new clique of countries that could outrun the long-held domination of China in the Indo-pacific. But, when it happens, the USA won’t be part of it.