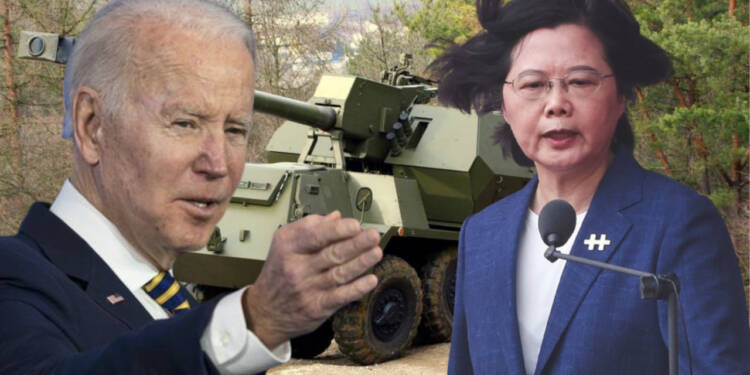 We’re not sure why, but the United States has always been Anti-Taiwan under Joe Biden. The White House may never confess it, but Biden’s actions are enough to convince the world that if a crisis arises, he is not going to defend Taiwan.

Yesterday, The Pentagon notified Taiwan that the M109A6 “Paladin” self-propelled howitzers purchased by the nation cannot be delivered on time due to inadequate production capacity.

Instead, various long-range precision strike weapon systems such as the High Mobility Artillery Rocket Systems (HIMARS) have been offered by Washington. The cost of these weapons is higher than that of howitzers and as expected Taiwan had no other choice rather than consider it due to a lack of alternatives.

But that isn’t the point; the point is that Joe Biden’s U-turns could have serious consequences, especially since the Chinese invasion threat has already begun to loom over Taiwan.

These Howitzers were offered by the United States itself. The proposed sale of 40 155mm M109A6 Medium Self-Propelled Howitzer artillery systems to Taiwan in a bid value of $750 million was approved by Washington in 2021, however, the first delay came with a timeframe of 2023.

Later on, The deliveries were pushed to 2026, citing an overburdened production line as an explanation. Furthermore, the United States provided an alternative i.e. HIMARS at that time. In the aftermath of Russia’s invasion, the US stated it that will increase its military backing and equipment supplies to Taiwan. But, on the other hand, The US does not even provide details on why the production line is overwhelmed.

And this is not the first time they had delayed support. The US had also suspended the delivery of $14.2 billion in defense military equipment to Taiwan, which the country had ordered in 2019. The Asymmetric weaponry system and smaller missile equipment were part of it.

The technology, according to Washington, would be useful in deterring and repelling a hypothetical Chinese attack. However, Joe Biden fails to recognize that the delivery delays will just serve to motivate China even more.

Joe Biden should be hailed as a master of U-turns, which have resulted in numerous mishaps, catastrophes, and devastating shockwaves around the world. Afghanistan withdrawal, Title 42, and even Build Back America are all examples of this. Biden has presented a detailed rundown of how his own U-Turns have made the matters worse. This delay in equipment isn’t any different.

Firstly, Joe Biden remembered Taiwan shortly before the midterm elections and decided to send Nancy Pelosi. On the other hand, the Pentagon had already decided that if US forces come to Taiwan’s rescue, they may be beaten and will almost surely suffer heavy losses in personnel and equipment. As a result, the US has already decided to leave Taiwan.

The truth remains that Taiwan is edging closer to a full-fledged conflict with China as a result of Joe’s mastery of U-turns. Taiwan may find itself in a weaker position if it does not have access to US equipment.  Joe will do nothing except words and show a sense of fake unity with Taiwan if it gets attacked. Solidarity isn’t going to work. Defense equipment can.