Has Germany jumped into bed with Iran? Or France, is it? Or Spain? 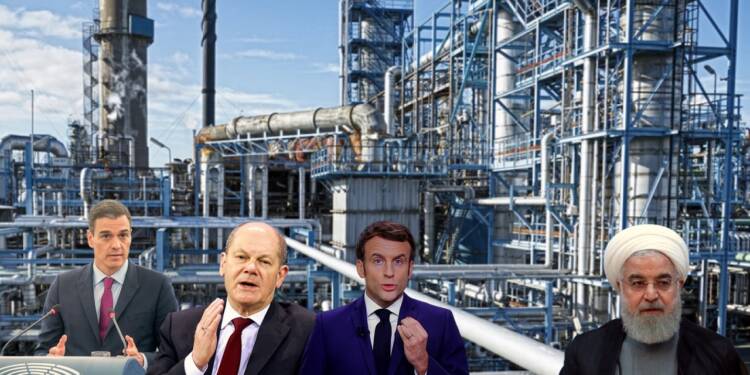 By many measures, the Islamic Republic of Iran is shrouded with sanctions. Despite the soaring inflation and embargo from major allies regarding the import of Iranian oil, Tehran is finding a way to steer clear of the predicament that the US instilled upon it. It looks like Iran is far from collapsing, Thanks to the Ukraine war.

Iran is set to move ahead with a US$500 million contract for the production development and enhanced oil recovery from its strategically prized south pars oil layer field located in the center of the Persian Gulf. The deal in the table is between the National Iran Oil Company (NIOC) and an undisclosed foreign company. A catchier point lies in the strategic importance of the South Pars oil field. The region is considered a treasure trove that houses more oil than what was proclaimed by the Iranian petroleum ministry. Foreign countries have always eyed the greener pastures of the south pars oil field, but their participation was hindered due to the maximum pressure strategy employed by America.

Every passing day offers new shifts and turns in the geopolitical arena and it seems like Iran has found a leeway to get past the impasse that is JCPOA. With US hardening its tone on Russian sanctions, Iran is looking to raise its stake considering the level playing field it has been offered with. The south pars fields hold an estimated 14.2 trillion cubic meters (TCM) of gas reserves in place plus 18 billion barrels of gas condensate. The region will be the facet of effective international trade and finance for Tehran in the coming days.

With the war in eastern Europe seeing daily acts of escalation, the reality suggests that the US imposed sanctions on Russia are not going anytime soon. Many Europe countries are rattled to leave out their Russian dependence on the energy sector, excluding a few names like Hungary. Russia has normalized the trade in rubles and any country not in compliance with the kremlin’s pact is potentially under an energy threat.

Read more: Obama-Trump-Biden: The three European overlords whose diktats led to an energy crisis in Europe

Germany fears that it is next on the list to receive Putin’s wrath. Even the EU confirmed the same. Since the world-changing event in February, Berlin’s economy has crumbled out of proportion. Albeit the Inflation burgeoning at a rapid pace and the energy sector taking a downfall, Germany never stopped stoking the fire with Russia, as they were blindly under the US influence to put restrictive sanctions.

It came late into Berlin’s mind the unrealistic goals they were chasing for. Without Russia, the German energy sector would go to tatters and there is no coming back from it. With things going beyond proportion, any move from Germany again to be cordial with Russia will be received with Putin’s aggression.

France and Germany stand arguably the superpowers when it comes to the European bloc. Paris has been more into a mediator role in the Ukraine crisis. But with every move to pacify the Russian leader getting doomed, Paris is left with no other option but to search for an alternative in the energy sector. Since being at the helm of the European Union, Paris could never join hands with Russia even if they intend to. Macron is mindful of this fact and has been in a dire search for a possible alternative.

Spain is a financially stable country sandwiched between scenic beaches and soccer. But when it comes to the energy sector the country is in shambles. Madrid has wrecked relations with Algeria with its stance on the Western Sahara dispute with Morocco. Algeria, the oil bastion in Africa has been touted as the possible alternative for Russia by the US. But with the catastrophe looming in the energy sector, Spain’s chances of mending relations with Algeria seem out of the cards. Being a strong force against Russia from the start, the choices in front of Spain is also disturbing.

The US hegemony over Europe faded out after their disastrous take on the current Ukraine crisis. Moreover, France has been independently taking decisions in the EU bloc tilting further away from the US diktats. So, connecting the dots, either one of the three European countries may be heading their way to Tehran to ramp up its energy sector for good. And with the US prioritizing the Russian sanctions, Iran is turning out to be one of the most profitable countries in the world.