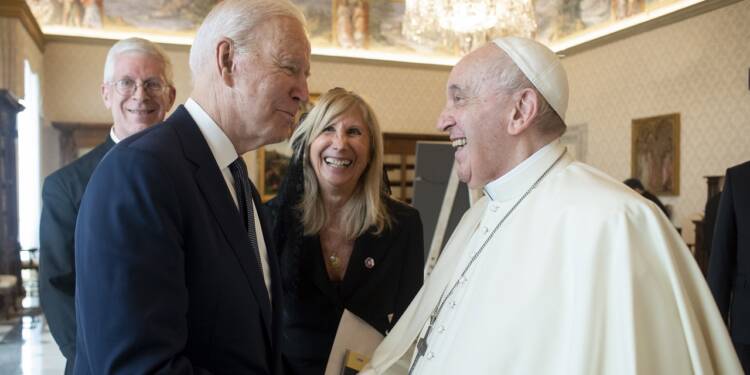 Pope Francis in an interview on Tuesday lashed out at NATO for igniting a crisis in Ukraine. Calling a spade a spade, the supreme Pontiff said that the war broke out because NATO started barking like a dog on Russia’s borders.

NATO blamed for the war

The Pope also reiterated his wish to meet Russian President Vladimir Putin to press the Kremlin to immediately stop the Russian assault in Ukraine. The Pontiff labeled this war as “senseless” and cruel” while saying that he was not interested in visiting Kyiv before he visits Moscow. The Pope said, “I’m not going to Kyiv for now. I feel I shouldn’t go. I have to go to Moscow first, I have to meet Putin first.”

Pope’s statements over the Ukraine crisis have made two things more than clear. First, NATO is responsible for this “senseless” war in Ukraine. Second, dialogue with Putin and not Ukraine’s Zelensky should be the West’s priority if it wants to stop the war.

Pope and Joe Biden on the collision course

Pope’s statements also suggest that Joe Biden-led US has failed its people and the West in the handling of this crisis. It was Joe Biden who set an eastward expansion of NATO in motion and who provided financial and military aid to Ukraine that aggravated the miseries for millions of Christians in the two nations. It is believed that at least 10,000 people have already lost their lives in the ongoing Russia-Ukraine war so far.

Biden has no dearth of reasons to justify his brutal war in Ukraine. He desperately wanted to isolate Russia and mainstream China from day one of his presidency. So, he kept poking Putin in Ukraine just to rattle Russia to create a pretext for an escalated war in Eastern Europe. Moreover, we have to admit that the war in Ukraine has come as a blessing in disguise for the Military-Industrial complex in Washington DC.

As previously documented, six Democratic American congressmen are earning handsomely from the disaster that has struck Eastern Europe. There’s a reason why so many American legislators aren’t ashamed to have commercial ties with the defense manufacturing industry.

It allows them to make a lot of money. Since the invasion, shares of Lockheed and Raytheon have risen by roughly 16 percent and 3 percent. The largest player in the UK and Europe, BAE Systems, was up 26%. For America’s cash-strapped deep state, this conflict is a godsend.

An electoral setback for Biden

That’s why, this chastening by the supreme pontiff can be called a major setback for Joe Biden, a catholic president himself. Since the US is called the de-facto leader of NATO, Joe Biden has now come into the crosshairs of the Pope.

It’s a big deal for a Catholic president, who managed to come to the Oval office only because Catholics threw their weight behind him. In the 2020 election, Catholic voters accounted for a significant 22 percent of the electorate—a crucial demographic for either candidate to secure. But Biden, clearly benefited from the group, as per a Newsweek report.

Joe Biden is quite open about his Catholic faith. He had quoted St Augustine in his inaugural address and Ecclesiastes 3 in his presidential victory speech. So, he isn’t expected to cause disasters in the nations like Ukraine and Russia. And that’s why even Pope has now issued a rare rebuke to the US president. Because he genuinely wants to stop this bloodshed in this part of the world. He wants this war to end, and stopping NATO from keeping fueling this war is the only way out of this mess. We have to give it to Pope Francis, he’s a far better diplomat and geopolitical expert than the 79-year-old US president who has spent most of his life warming his chair in high offices of Washington.

Has Germany jumped into bed with Iran? Or France, is it? Or Spain?