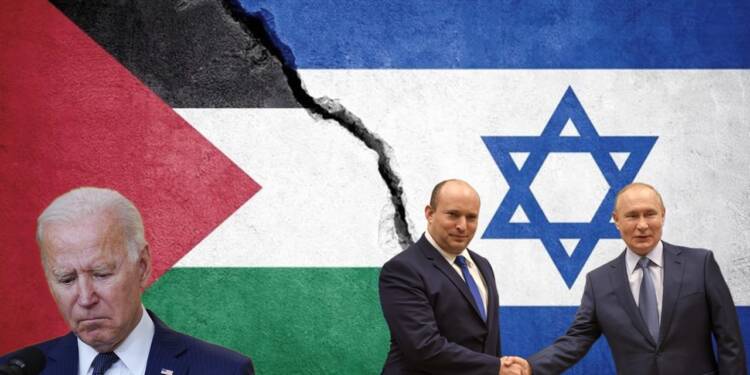 Does the United States actually bother about the human rights situation in other countries? The bitter truth is that Washington DC has always used the human rights ‘club’ as a tool to intimidate its rivals and even allies into following its geopolitical agenda.

For instance, the Democratic government of Joe Biden is now going after Israel to force the Jewish nation to toe USA’s line on the Russia-Ukraine crisis.

Recently, the American Bar Association (ABA) rejected Israel’s demand to classify six Palestinian NGOs as terrorist organizations. On behalf of the ABA, its President, Reginald Turner, wrote to the Israeli Prime Minister, Naftali Bennett, “We request that you review the concerns some in the international community have expressed, questioning whether the procedures utilized [in making this designation] inappropriately deprive persons or organizations of their rights.”

The six listed NGOs were recently declared “unlawful” by the Israeli security agencies. However, this decision was vehemently condemned by the UN Human Rights Council.

UN High Commissioner for Human Rights called the terror listing of the Palestinian NGOs an attack on human rights defenders, freedom of association, and the right to public participation, saying the decision should be immediately revoked.

US fuming at Israel’s settlement program

And the issue of listing six NGOs as terror outfits is not the only point of contention between the two nations, the US is also fuming at Israel for its plans to advance nearly 4,000 settlement homes in the West Bank. The State Department also made it clear that Israel’s move to settle new homes in the disputed region heavily undermines the two-state solution to the Palestinian crisis.

State Department deputy spokeswoman Jalina Porter said, “The Biden Administration has been clear on this from the outset. We strongly oppose the expansion of settlements which exacerbates tensions and undermines trust between the parties. Israel’s program of expanding settlements deeply damages the prospects for a two-state solution.”

The State Department also criticized a Wednesday decision by Israel’s High Court of Justice that allowed Israeli authorities to evict some 1,300 Palestinians living in an area the IDF seeks to use as a training zone.

US debilitating its ties with Israel

You see, the US and Israel seem to be at odds with each other over the issues ranging from Human rights to the settlement program. The rift in the rock-solid ties of the long-time allies comes at a time when Israel and the US have failed to see eye to eye on the Russia-Ukraine crisis.

Israel has so far refused to join the West’s anti-Russia campaign and steered clear of imposing any sanctions on the Kremlin. Israel has also refrained from providing any substantial military or financial support to Ukraine to respect its commitments toward Russia. Israel and Russia, under a de-conflicting mechanism, work together to avoid flare-ups in Syria and Iran.

Russia to have the last laugh

Israel understands that its security partnership with Russia is vital to maintain stability in the Middle Eastern region. Even Russia values its ties with Israel, which seeks its essential to materialize its domination ambitions in the Middle East. Russia looks to cut USA’s influence in the region down to size by bolstering its ties with regional powers like Saudi Arabia, Iran, UAE, and Israel. Perhaps, that’s the reason why Russian President Vladimir Putin even went as far as to issue an apology to the Jewish state following an ill-thought remark by the Russian foreign minister pertaining to the so-called Jewish pedigree of German dictator Adolf Hitler.

You see, Russia seems to bother more about its ties with Israel than its decades-old ally, the United States of America. Biden’s desperation to ostracize and alienate Russia on the global geopolitical stage is taking a heavy toll upon the Israeli-US partnership. This will end up pushing Israel to bolster its ties with Russia in a more unapologetic manner eroding Washington’s clout in the country.