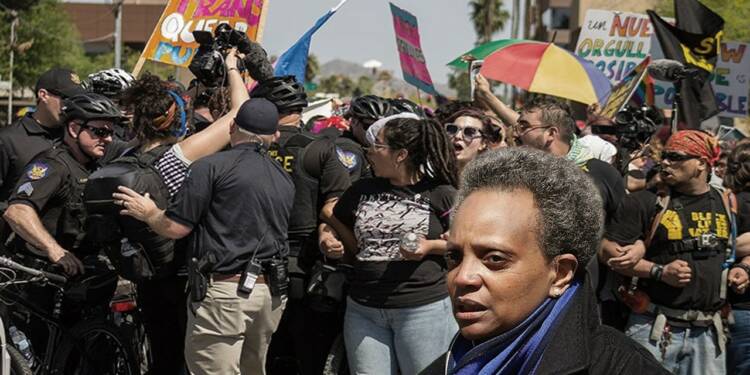 America was burning in the fire of riots and civil unrest 2 years back, due to the George Floyd Protests. There was loot, chaos, and, horrifying fires on the streets of the USA. You may not like it, but we feel another unrest of such intensity is knocking on the door of Washington DC.

Abortion is a very sensitive matter in the USA. right now there are reports that The US Supreme Court has decided by an internal majority to overturn Roe v. Wade judgment. A landmark 1973 judgment had made abortion a constitutional right in the United States.

After this, the situation is bleak in the United States. There is a fear in the air as the media pro-abortion protesters have taken over the streets. barricades have been erected outside the Court building with a foreseen possibility that protestors may enter Supreme Court.

Moreover, the judges that are rumored to have overturned the judgment have been moved to a safer place as their life is at risk. In such situations when there is a tight tensioned environment, The Democratic Mayor of Chicago has decided to raise a new flag that makes no sense right now. When there is a debate over Abortion. She came out concerning over LGBTQ+ community. Moreover, her words have the power to incite violence.

Last night, Lori Lightfoot, the Mayor of Chicago called for violence on Twitter. But, not from any abortion activist. Instead, she asked it from the LGBTQ+ community.

To my friends in the LGBTQ+ community—the Supreme Court is coming for us next. This moment has to be a call to arms.

Lori Tweeted, To my friends in the LGBTQ+ community—the Supreme Court is coming for us next. This moment has to be a call to arms.” Furthermore, she wrote, “We will not surrender our rights without a fight—a fight to victory!”

Yes, you read that right, Lori Lightfoot called for arms, a clear indication that she looks for violence in midst of a tense situation. This is the same Lori Lightfoot that was bashing Donald Trump and Republicans after the capitol hill riots in 2021. Remember what she stated?

I am in disbelief with what is unfolding in D.C. right now. President Trump and his enablers incited this violence. Shame on every elected official in Congress and elsewhere who fomented this anti-democratic insurrection by extremists. This is not democracy. This is a disgrace.

“I am in disbelief with what is unfolding in D.C. right now. President Trump and his enablers incited this violence. Shame on every elected official in Congress and elsewhere who fomented this anti-democratic insurrection by extremists. This is not democracy. This is a disgrace. media” These were her words. And now, she is calling for violence as she feels that LGBTQ+ can be next. Firstly, her claim is absurd and secondly, this is a time to call to peace. But, a typical democrat wants new violence. So, you can make gains in midterms by emotional pitching?

Read More: Tulsi Gabbard’s aggression is the kind of aggression Republicans need to take down black supremacists like Lori Lightfoot.

Lori Lightfoot should get booked for sedition and jailed for life as she is legit trying to incite violence.

She has called for violence for the freedom of the LGBTQ+ community as she believes the supreme court can come against them. This claim does not make any sense. Ms. Lightfoot currently should ensure another Chicago killing does not happen due to the rising tensions.