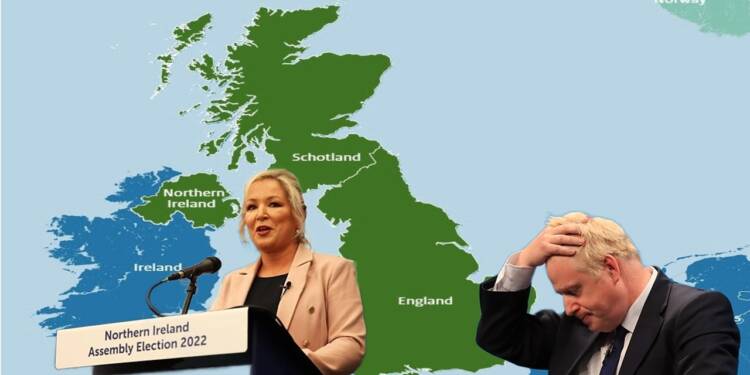 The gust of wind breezing past the cozy bays and the sheer cliffs of Belfast had nothing new to offer. Tourists as always go rolling cameras with trying angles to frame the river lagan at its scenic best. Entwined with ulster fry and Irish stews Northern Ireland remained pretty much the same old tranquil country that everyone hopes to throw themselves in.  The same stands with the union jack souvenir shop in Belfast. An amiable John Keenan who runs the shop is covered with tourists running through his collection of attires and other paraphernalia. But by some means, John seems to lack the enthusiasm that he often blankets himself in.

“Obviously we don’t want a united Ireland and Sinn Fein is going to push for a border poll but I’d say bring it on, we’ve nothing to be afraid of,” John Keenan says.

Emerald of Isles to join hands

While the city of Belfast gets breezed in a gust of cool wind, the tides are changing when the landscape shifts to politics. After last week’s assembly election, the nationalist Sinn Fein political party emerged victorious, much to the dismay of Pro-British neighbors in the city.

Sinn Fein is the political wing of the Irish Republican Army. It’s a first in decades that a nationalist party is cruising towards the top spot in a British-run regions parliament. The win gives Sinn Fein the authority to nominate its leader Michelle O’Neill as the first minister and the ensuing days would see the nationalist leader pushing hard her prime objective of uniting the Northern Ireland with the Republic of Ireland in the south.

The prospect of a possible union with the Republic of Ireland has already fragmented a discord within the staunchly pro-British demographics within Belfast. A sizeable section of the society has voiced concern much like John Keenan and would favor Northern Ireland to remain an integral part of the United Kingdom.

Even if it allows Sinn Fein to permeate into the top post of the first minister certain roadblocks disallow a unilateral command over policy matters. Sinn Fein should rule in consent with the Democratic Unionist Party, the largest pro-British party in accord with the 1998 peace deal.

Boris Johnson has been rehearsing well his plot of bringing in a disparity between Northern Ireland and the EU. But his efforts are seemingly not hitting the right chords and his long-vouched stand of representing the people of Northern Ireland also hangs on the edge of credibility. The traditional protestants in Northern Ireland seldom envision the chance of going out of the EU and are invariably showing signs of being supportive of a Pro-EU alliance.

Even as indecision looms in Belfast with society getting diverged on opinion, the British attempt to further grapple Northern Ireland by the hook may remain a distant dream. Sinn Fein has clarified its stance on the decision and there is no backing from it, thus trudging forward for a possible unification from the Republic of Ireland. The process may not happen in a fortnight and it would be laborious enough to take into belief the contrarian voices emerging within the Pro- British cabal.

Whatever be the reason, the British move to use the long-held protocol as bait to further disturb the harmony in Belfast has taken a hit. It was palpable in Dominic Raab’s “whatever measures are necessary” opinion that persuaded the UK to go unilateral in decisions within Northern Ireland. Taking heed of the election results, coercing Northern Ireland into a trade war with the EU is of no help as Belfast is fast turning towards a pro-EU market that is sure to give Boris Johnson the necessary chills.