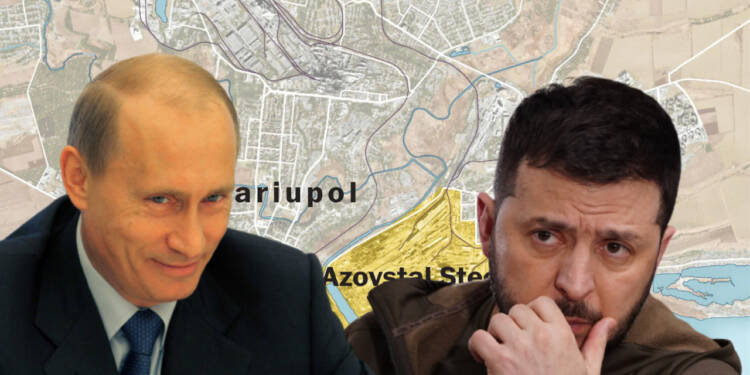 The Ukraine war is ending in a somewhat disappointingly bland manner. The US and the West had been driving a loud narrative by publishing conspiracy theories about glorious Ukrainian resistance against Moscow.

And now, Ukraine has surrendered one of the key objectives of the ongoing war i.e the city of Mariupol. So, what is the consequence of this surrender and how will it alter the course of the war? Let’s find out.

Ukraine’s military said on Tuesday that it aimed to evacuate its remaining soldiers from their last stronghold in Mariupol.

Russia reported that 256 Ukrainian fighters had “laid down their arms and surrendered”. The General Staff of Ukraine’s Armed Forces said, “The ’Mariupol’ garrison has fulfilled its combat mission.”

It added, “The supreme military command ordered the commanders of the units stationed at Azovstal to save the lives of the personnel … Defenders of Mariupol are the heroes of our time.”

Ukrainian President Volodymyr Zelensky too said, “We hope that we will be able to save the lives of our guys.” He added, “There are severely wounded ones among them. They’re receiving care. Ukraine needs Ukrainian heroes alive.”

What does the surrender mean for Russia?

There is a reason why Ukraine’s surrender is being described as a turning point in the ongoing war. Mariupol is a part of the industrial region in Eastern Ukraine called Donbas. The region was seen as a key Russian geopolitical objective given the presence of pro-Russia separatists in Donbas.

Now, capturing the city allows Putin’s Russia to create a land route that connects Russia’s boundary to the Crimean Peninsula. It also deprives Ukraine of a major port and prized industrial assets.

More importantly, Russia will now be able to free troops engaged in Mariupol that can now be used for carrying out operations elsewhere in Donbas.

This is why the Russians too are in a celebratory mood. Putin has congratulated the Russian military and has said that “putting such an important center in the south as Mariupol under control is a success.”

Moreover, capturing Mariupol gives Moscow total control of the Sea of the coast of Sea of Azov, and a large chunk of Ukrainian territory equal to the size of Greece.

What will Russia do now?

As for Russia, the next military objective will be to seize full control of Donbas and rid Luhansk and Donetsk of Ukraine’s sovereignty.

All eyes will now be on Kharkiv, Ukraine’s last stand in its eastern territory that has come under a heavy Russian military assault. Once the city falls, it would mean de facto control of Luhansk for Moscow.

Ukraine has been trying to put up a brave fight but with more Russian troops and assets likely to pummel Kharkiv, it is a question of when and not if. Kharkiv will fall sooner or later and that will mean the end of the Ukraine war, at least as far as eastern Ukraine or Donbas is concerned.

Ukraine is a part of Russia’s larger geopolitical goals. It isn’t the ultimate goal in itself.

Try to figure out what exactly Russia has achieved by literally running over Ukraine. It has proved that the Western world or NATO is more or less irrelevant and incapable.

It isn’t as if Russia ran through Ukraine in one swift stroke. Putin’s forces kept cutting through Ukraine and ultimately managed to overpower it. It was slow and steady progress. Meanwhile, the US and the EU never went above propaganda. They just kept talking about phasing out Russian gas and helping Ukraine while Russia went about its campaign in a rather indifferent manner.

Read more: France and the US suggest that Russia has won the War

Mariupol’s surrender is thus a big defeat for Ukraine but a bigger one for NATO.