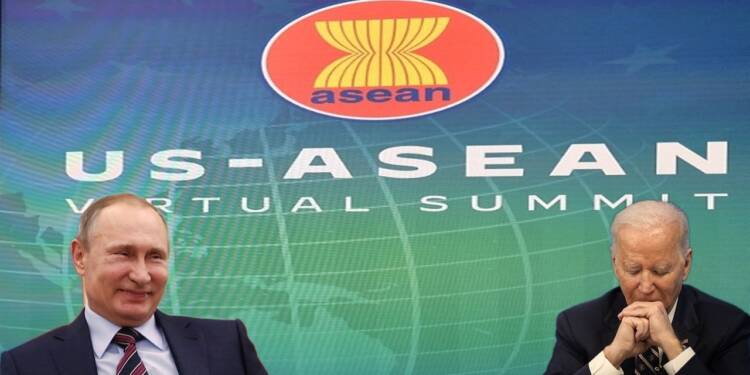 Biden is currently on a mission to get the world to rally behind the US in condemning the Russian invasion of Ukraine. He’s been quite successful in Europe but unfortunately, he couldn’t get the ASEAN countries to parrot the Western views. President Joe Biden recently attended a summit with the Southeast Asian leaders at the White House. The summit ended with the release of a joint US-ASEAN statement. The statement didn’t even mention Russia, forget condemning the invasion.

The nations participating in the summit called the Association of Southeast Asian Nations (ASEAN) issued a statement calling for the “immediate cessation of hostilities” in Ukraine. The countries in a joint statement said, “ We reaffirm our respect for sovereignty, political independence, and territorial integrity.” But no condemnation of the Russian activities, no mention of ‘war’.

“Concerning Ukraine, as for all nations, we continue to reaffirm our respect for sovereignty, political independence, and territorial integrity,” the summit communique said, followed by calls for an immediate cessation of hostilities and compliance with the U.N. Charter and international law.

Confronted with Russia dove ASEAN member states, Biden made no mention of the Russian invasion. “An Indo-Pacific that is free and open, stable and prosperous, and resilient and secure is what we’re all seeking,” he said, referring to his administration’s strategy geared toward responding to the challenges posed by China’s increasing economic clout and military ambitions in the region.

Edgard Kagan, special assistant to the US president and senior director for East Asia and Oceania on the National Security Council, said, “I don’t think that there was a particular focus on trying to persuade countries to distance themselves [from Russia]”

Russia is seen as a reliable defense partner by ASEAN nations

In any case, the ASEAN has remained silent over Russian President Vladimir Putin’s invasion. Opinions on Ukraine differ across the ASEAN group. Myanmar, Vietnam, and Laos have strong economic and military ties with Russia. Singapore on the other hand, was the only country in the group to censure Russia for the invasion. Others, such as Indonesia, Malaysia, and Thailand have remained neutral.

In fact, Indonesia, which will host the Group of 20 summits later this year, has refused to ban Russian President Vladimir Putin from the event.  With this, Indonesia provides a geopolitical pattern for other countries in the region. Therefore, Indonesia has refused to join the Western-led campaign to demonize Russia.

Nevertheless, as we explained in one of our previous pieces, these countries regard Russia as a more trustworthy partner. Vietnam for example,defenseare relies heavily on Russia for guns and ammunition. Last year it also struck a pact with Russia to strengthen military trade and technological cooperation. Indonesia, the Philippines, Malaysia, Myanmar, and other nations in the area have grown virtually totally reliant on Russia for their defense needs. India and the Philippines just inked a BrahMos missile (Russia-India joint venture) pact only after Russia’s clearance.

Read more: Indo-Pacific nations view Russia as a better partner than the US to counter China

As a result, any denunciation of Russia’s invasion of Ukraine by Biden would not have received much backing from these ASEAN countries. As a result, Biden was unable to bell the cat, and Russia was not discussed throughout the meeting.