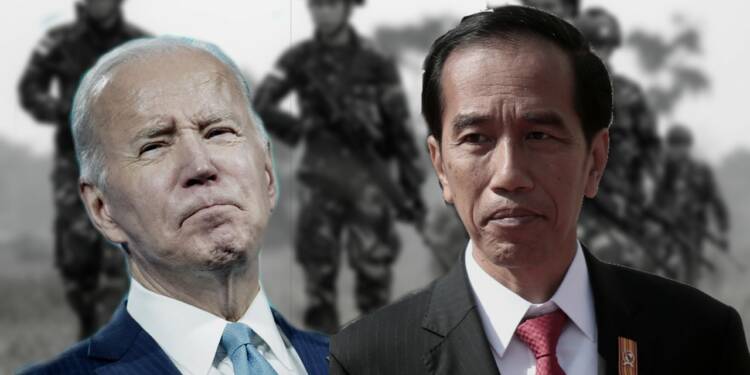 US President Joe Biden has been following a one-point agenda ever since he came to power – marginalize Russia and isolate China. He has even been forcing the likes of Indo-Pacific powers like India, Japan, and the ASEAN to condemn Russia even though these countries are concerned about Chinese belligerence.

Yet, Biden’s efforts are failing. Indonesia, the largest ASEAN country, insists on refusing to condemn Russia and is focusing on China instead. Therefore, Indonesia is now bringing together a group of 14 nations to counter Beijing.

Read more: The only nation in the world that can stop the Russia-Ukraine war

Indonesia brings together 14 nations against China

The US and Indonesia hold annual bilateral military exercises called the Garuda Shield. This year, the 16th edition of the annual war games will be held in August.

However, there is one important difference this time around. Indonesia is expanding and diversifying the annual military exercise. In a news release on Thursday, the Indonesian Army said that the annual war games are being expanded to 14 participating countries.

Military personnel from the United Kingdom, Australia, Japan, Malaysia, Singapore and Canada will be joining the annual military exercises this time around. By bringing in China-hating countries like Singapore, Malaysia, Australia and Japan, Indonesia is ensuring that the Garuda Shield remains an anti-China exercise at its core. It doesn’t want Biden to dilute the anti-China tilt of the annual war games and bring in the Russia angle.

On one hand, Indonesia wants to host anti-China platforms and on the other hand, it insists on not condemning Russia.

Biden has used all diplomatic tools including moral policing in order to get Indo-Pacific countries to slam Russia. The US has been pushing the Southeast Asian nations and other regional powers like India to join the Western world’s sanctions against Russia.

But last month, Indonesia made it clear that it had no plans to sanction Russia. In an interview with Nikkei, Indonesian President Joko Widodo said that sanctions “are not the best solution to resolve the problem” as “people and civilians will be the victims.” Widodo also said, “Ukraine and Russia are friends of Indonesia.” So, basically, Indonesia is playing neutral, regardless of Biden’s pressure to sanction Moscow.

Why is Indonesia refusing to condemn Russia while going after China?

Well, there are three main reasons.

Firstly, Indonesia and China share a bitter maritime dispute over the Natuna Islands in the South China Sea. China claims sovereignty over the area near Natuna Islands, inside Indonesia’s Exclusive Economic Zone (EEZ). So, Indonesia naturally perceives China as a threat to its national security.

Read more: Indonesia ropes in Russia and Britain to fight China’s claims in the Natuna Sea

Secondly, public opinion in Indonesia favours Russia. A story that characterizes Russia as a dutiful husband, Ukraine as a disloyal ex-wife, the US as the ‘other man’ and disputed territories of Luhansk, Donetsk and Crimea as the kids of Russia and Ukraine. Basically, the story justifies Putin’s war. Widodo, of course, doesn’t take such a strong line but he is also not in a position to condemn Russia.

And finally, Russia isn’t an enemy for Indonesia, while China is its main enemy. Indonesia actually operates several Russian defence platforms which only help it to counter Chinese aggression. So, what will it gain by antagonizing Russia at Biden’s behest? Biden won’t come running with American defence equipment if the Chinese PLA launches an assault. We have seen how weak a US response can get amidst the ongoing Ukraine crisis.

Therefore, Indonesia has sent across a very clear message – We won’t condemn Russia. We won’t sanction Russia. And we will continue to oppose China, no matter what.

Good News: US budget deficit is falling; Bad News: This happened due to a ‘fraud’