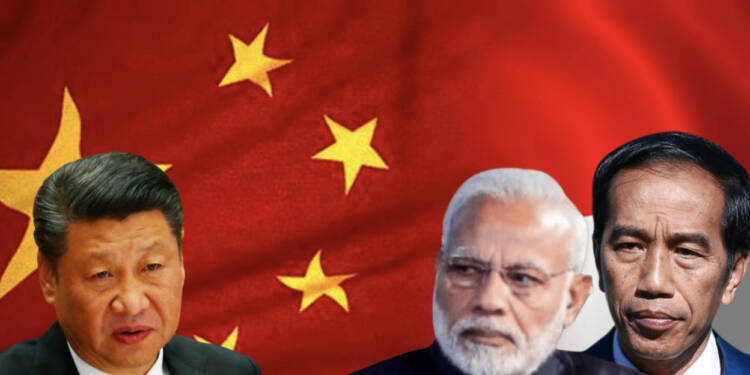 Indonesia is on the verge of facing a major armed conflict with China and has, therefore, decided to warm up to India. As per ET, an Indian daily newspaper, Indonesia has sought defence technology from New Delhi in a bid to improve its security apparatus and counteract Chinese expansionism in the region. As per ET, Jakarta is looking forward to joint defence production with India on Indonesian soil, so that Indonesia can acquire skills in defence technology.

Meanwhile, the traditionally volatile relationship between Indonesia and China has deteriorated further, with China demanding that Indonesia stop oil and gas drilling in the Natuna Islands, and Indonesia considering sending in fishermen to report irregular activities in the waters, north of the Islands.

China-Indonesian relations- a history of conflict and tensions:

Within Indonesia, there is a perpetual animosity against China and Communism. In the 1950s and the 1960s, the Sino-Indonesian relationship was on good terms under the reign of President Sukarno. At that time, Indonesia’s PKI was the third-largest communist party in the world and was one of the big winners in the first general election of 1955.

Yet, in the mid-1960s, anti-Chinese sentiment and anti-Communism peaked in Indonesia. The PKI started to get seen as a threat to anti-Communist politicians and the right-wing leadership of the country’s army. So, there were three main actors- President Sukarno, the PKI, and the army. On September 30, 1965, a team of left-wing soldiers abducted several right-wing military bosses, on the pretext of protecting Sukarno from a coup.

Ultimately, Major General Suharto reacted to the vacuum in leadership, took control of affairs, and defeated the movement. The army accused the PKI of leading the planned coup. In an article for The Conversation website, Wardaya wrote, “This triggered the largest anti-communist purge and mass killings in modern-day Indonesia.”

After assuming power in 1967, Suharto instituted what was called the ‘New Order’. His regime continued to fan anti-Communist sentiment, as it was the main driving factor behind his rise to power and continued rule till 1998.

In today’s Indonesia, China is hated for many reasons. Many of them feel that China as a “communist” state was responsible for the September 30 Movement, others see China as “capitalist” given the visibility of ethnic Chinese entrepreneurs in the country, and yet others hate China because of an “imperialist” history due to the Yuan dynasty’s invasion of Java in the 13th century.

Then, there are other socio-economic issues also. Chinese workers are allowed to work in nickel, and stainless steel mining projects in the Southeast Asian nation, and locals are unhappy over how Chinese citizens find employment in Indonesia while local unemployment keeps rising. Also, there are fears regarding growing Chinese influence in Indonesia in terms of its imports.

Finally, Indonesia is the most populous Muslim-majority country, with over 230 million followers of Islam. Therefore, Beijing’s ill-treatment of Muslim Uyghurs in the Xinjiang province is a contentious issue in the Southeast Asian nation.

The relationship between Beijing and Jakarta is already quite fragile. And now, the Natuna Islands dispute is becoming a major flashpoint between Indonesia and China. Natuna Islands are an integral part of Indonesia, and Indonesia isn’t considered a part of the South China Sea disputes either.

However, Chinese expansionism knows no bounds. China’s nine-dash line doesn’t intersect with the Natuna Islands, but the islands’ 200-mile exclusive economic zone (EEZ) overlaps with the Chinese claim by about 50,000 square metres. And this is the root of territorial disputes between Jakarta and Beijing. China doesn’t dispute Indonesia’s sovereignty over the Natuna Islands, but it claims ‘historic maritime rights’ in areas overlapping with this part of Indonesia’s EEZ.

Read more: Indonesia has chosen the Arab-Israel bloc over Turkey-Pakistan, and it changes everything

Beijing’s hawkishness and insistence on exploiting Indonesia’s Exclusive Economic Zone reinvigorate anti-Chinese sentiment in Indonesia. As such, Indonesia’s President Joko Widodo doesn’t pursue a hostile China policy, but given the public opinion, he simply cannot refuse to take on China and assert Indonesian sovereignty over the Natuna Islands.

The Natuna Islands dispute is a longstanding issue in Sino-Indonesian relations. However, things went a little too far when China asked the Indonesian government to stop drilling for oil and natural gas near the Natuna Islands on the ground that the region was “Chinese territory”.

Indonesian authorities, on the other hand, are considering creating a maritime militia of their own and sending in fishermen to inspect irregular Chinese activities in the disputed region. Colonel Wisnu Pramandita, the spokesman for the Maritime Security Agency (Bakamla), also disclosed plans to train and pay fishermen to join patrols by the agency and the navy.

These are signs of a building conflict- China actively denying Indonesian sovereignty in the region and Indonesia finding ways to counteract Chinese belligerence. It was under such circumstances that India’s deputy national security adviser Pankaj Saran travelled to Jakarta last week and met the Indonesian defence minister Prabawo Subianto. Expanding defence partnership and joint defence production were the key items on the agenda during the Indian official’s visit to the Southeast Asian nation.

Presently, Indonesia may be looking forward to using fishermen for inspecting Chinese activity. However, Jakarta clearly looks at an inflating conflict that could actually involve the use of military firepower. Indonesia is preparing for a likely armed conflict with China and New Delhi has, therefore, come to Indonesia’s rescue.
Tags: ChinaExhaustive ReadsIndiaIndonesiaPLAXi Jinping
ShareTweetSend
Previous Post