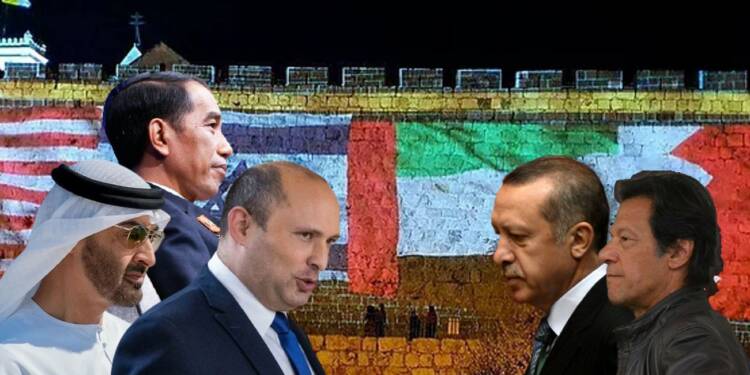 The politics of South East Asia has been dominated by the larger countries for a very long time. Be it the economic powerhouses and population clusters like Singapore, Malaysia, Indonesia, Vietnam, Philippines among others. However, the two countries Indonesia and Malaysia have been competing to be the bigger voice in the ASEAN. While it has been a healthy competition and the relationship has been cordial given they have been part of the US alliance structure for a really long time in the late 20th century; the latest developments in the world and constant realignments have made Indonesia consider increasing its engagement internationally.

The attempts by Malaysia to form a group of Muslim countries that can rival the Organisation of Islamic Countries (OIC) was intended to increase its diplomatic heft, under Mahathir Mohammad. However, as these attempts fell flat and Malaysia along with Turkey and Pakistan were humiliated thoroughly, it has allowed Indonesia to increase its influence by siding with the Arab-Israel block. In light of these developments, Itay Tagner, Israel’s Charge d’Affaires in Bahrain, was spotted conversing with Indonesian Defense Minister Prabowo Subianto in a rare public engagement between the two countries yesterday on the sidelines of Bahrain’s annual IISS Manama Dialogue conference.

Although no further details about the meeting have been released, it has fuelled speculation that the world’s most populous Muslim-majority country, which currently has no diplomatic ties with Israel, maybe looking to normalise relations in the wake of the US-brokered Abraham Accords, which saw Israel normalise relations with Bahrain and the United Arab Emirates, followed by Sudan and Morocco.

Issawi Frej, Israel’s Minister of Regional Cooperation, said on Saturday that Israel will negotiate normalisation agreements with more Arab states this year. “Several regional states are waiting to sign deals, and Israel is in contact with nearly every state in the region,” Frej stated during an onstage interview in Ra’anana, according to the Kan national radio. On the docket, Frej did not provide the name of any specific country.

Oman has long been mentioned as one of the next countries to establish diplomatic relations with Israel. In 2018, it hosted then-Prime Minister Benjamin Netanyahu, was quick to voice support for the normalisation agreements Israel made with the UAE and Bahrain and sent a representative to a September event in New York commemorating the one-year anniversary of the signing of the deals. The Trump administration had Indonesia and Mauritania lined up to be the next Muslim countries to establish relations with Israel, but ran out of time, according to US officials who spoke to The Times of Israel earlier this year.

Oman has long been mentioned as one of the next countries to establish diplomatic relations with Israel. It hosted then-prime minister Benjamin Netanyahu in 2018, was quick to express its support for the normalization agreements Israel signed with the UAE and Bahrain and sent a representative to an Israeli event in New York marking the one-year anniversary of the accords’ signing in September. The Trump administration had Indonesia and Mauritania lined up to be the next Muslim countries to establish relations with Israel, but ran out of time, according to US officials who spoke to The Times of Israel earlier this year.

The failure of Turkey-Malaysia-Pakistan efforts for a parallel Islamic block:

Joining its fast friend Pakistan in solidarity, the Islamic state of Turkey October 21, was placed on the “Grey List” over money laundering and terrorist financing by the Financial Action Task Force (FATF). With Pakistan already occupying an illustrious spot in the list for three years running and the watchdog in no hurry to cross out its name, and Mahathir Mohamad out of Malaysia, the Islamic triangle of Pakistan-Turkey-Malaysia has finally breathed its last.

With India choking the Malaysian economy using the Palm oil trade as effective leverage, Mahathir was kicked out of the office by his successors. As reported extensively by TFI, India had restricted palm oil imports from Malaysia as a punitive measure against Mahathir Mohamad’s constant anti-India rants and meddling in India’s internal affairs in his quest for Wahhabism. Ever since Malaysia, under its current PM Muhyiddin has distanced itself from Pakistan and Turkey — the to-be grand axis, as such, had fallen even before inception.

Increasing support of Israel in Indonesia:

Back in June, as per The Jakarta Post, amid the overwhelming pro-Palestine voices on social media, Monique Rijkers, an openly pro-Israel Indonesian, argues on her Facebook and Instagram accounts that Hamas, the Islamist party in control of Gaza, was to blame for the recent escalation of violence and that condemning Israelis was wrong because they were “just protecting their citizens”. “Hamas was initially a chapter of the Ikhwanul Muslimin movement in Gaza that later became a political party. In 2006, Hamas won an election in Gaza and took power. Since then, it has regularly terrorized Israel even though Israel left Gaza in 2005,” she said on her Facebook account.

When the coalition was created four months ago, Frej, the only Arab minister in the government, was tasked with leading the Regional Cooperation Ministry. Given the Foreign Ministry’s similar tasks, the office has long been considered obsolete, but Frej has asserted that he will make it important in strengthening commercial contacts with the Palestinian Authority and the Arab world. Frej also noted in the interview on Saturday that Israel and the Palestinians made a mistake by failing to capitalise on the success of the Oslo Accords, which were signed with the Palestinian Authority in the 1990s. Now, in these cordial circumstances, as the Arab countries become more and more receptive to Israel, Indonesia will find it beneficial to normalise relations with Israel.

The Syrian war is over. And the biggest sign of it is here