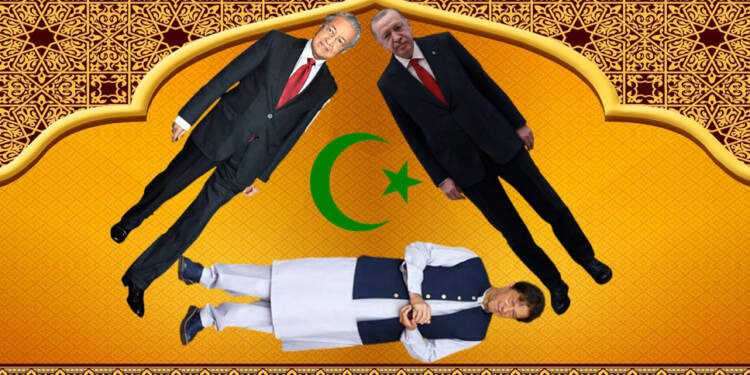 Joining its fast friend Pakistan in solidarity, the Islamic state of Turkey on Thursday (October 21) was placed on the “Grey List” over money laundering and terrorist financing by the Financial Action Task Force (FATF). With Pakistan already occupying an illustrious spot in the list for three years running and the watchdog in no hurry to cross out its name, and Mahathir Mohamad out of Malaysia, the Islamic triangle of Pakistan-Turkey-Malaysia has finally breathed its last. So, bring out the wreaths and pay a heartfelt tribute to the triangular alliance that disintegrated faster than an element with the shortest half-life in chemistry – Hydrogen-7

FATF president Marcus Pleyer in a virtual press conference from Paris, at the end of its October plenary, announced the big decision. The inclusion in the FATF Grey List was long coming for Erdogan as the financial watchdog had put Turkey on notice for two years when it found “serious shortcomings” in its approach towards combating money laundering and terrorist financing.

Under Erdogan, Turkey fast became an ideologue of sorts for Islamist terrorist groups and countries like Pakistan across the globe. From Syria to France to India and Armenia, Ankara shamelessly used proxy terrorists and Syrian mercenaries/fighters to disrupt global peace. And all because, Erdogan wanted to recapture the old glory of a battered, long dead, Ottoman empire by proclaiming himself as the Calipha of the world.

As reported by TFI previously, Turkish outfits backed by Erdogan’s radical government in Ankara had been supporting and funding Islamist radical organisations in parts of India such as Kerala and Kashmir. An assessment report released by New Delhi last year had noted the emergence of Turkey as “the hub of anti-India activities” next only to Pakistan.

Read More: Second to only Pakistan, Turkey is funding anti-India activities on a large scale be it in Kashmir or Kerala

Apart from the funding, Ankara had been roping in several NGOs throughout the country to lure students to Turkey where the Pakistani proxies took them under their wings to radicalise them.

It has also been reported that fugitive televangelist Zakir Naik had been heavily funded by Turkey and it was the collusion of Erdogan and Mahathir Mohamad that Naik was able to evade the clutches of the Modi government for so long.

Read More: Zakir Naik is turning into an ‘Islamic icon’ in Malaysia under Mahathir’s watch

Under Mahathir Mohamad, relations had peaked between Turkey, Pakistan and Malaysia, which were quite literally on the verge of announcing an anti-India alliance/axis, consisting of other smaller Islamic nations as well.

It was the 2019 United Nations General Assembly (UNGA) where the three musketeers first made bed with each other when they used the international stage to sabotage India. All three talked about Kashmir and how India was the root cause of the problems in the region. Elated that it finally had new masters, other than Saudi Arabia, Pakistan willingly laid down prostrate in front of Mahathir and Erdogan.

Erdogan had told Pakistan’s line on Kashmir even as Imran Khan made all possible attempts to internationalise the Modi government’s decision of abrogating Article 370.

During his speech, Erdogan had remarked, “Despite the resolutions adopted, Kashmir is still besieged and eight million people are stuck in Kashmir.” He had added, “In order for the Kashmiri people to look at a safe future together with their Pakistani and Indian neighbours, it is imperative to solve the problem through dialogue and on the basis of justice and equity, but not through collision.”

Such was the bonhomie between the triumvirate that in 2019, they had decided to jointly launch an English language Islamic television channel to correct misperceptions and confront the challenges posed by Islamophobia.


At the time, Erdogan had lured Imran Khan that not only will Ankara help Pakistan regain Kashmir from India but it will also help it get out of the FATF’s Grey List. However, fast forward three years, call it a cruel practical joke or just pure coincidence, both friends are on the dreaded list and staring at an economically bleak future.

The rapid decline of the once-booming economy of Turkey

Turkey used to be a prosperous economy. In fact, it used to be a bright shining spot as a liberal democracy and a NATO member with a high economic growth rate. However, Erdoğan’s Islamist policies have destroyed the Turkish economy.

Erdoğan opposes any move to hike interest rates even as Turkey faces very high inflation rates and a constantly depreciating currency. It is well-settled amongst economists that interest rates must be raised to restrict inflation. But Erdoğan believes that higher interest rates further push inflation.

Read More: Turkey is an example of what Islamism does to an economy

The Turkish President keeps cutting interest rates at regular intervals and cracks down on rational economists in his government who advocate increasing interest rates. The inclusion in the FATF grey list will further squeeze its economy and make the lives of ordinary citizens difficult.

India struck the first hammer to break the unholy alliance

However, with India choking the Malaysian economy using the Palm oil trade as effective leverage, Mahathir was kicked out of the office by his successors. As reported extensively by TFI, India had restricted palm oil imports from Malaysia as a punitive measure against Mahathir Mohamad’s constant anti-India rants and meddling in India’s internal affairs in his quest for Wahhabism.

Ever since Malaysia, under its current PM Muhyiddin has distanced itself from Pakistan and Turkey — the to-be grand axis, as such, had fallen even before inception. The final nail in the coffin came with the Paris watchdog’s decision yesterday.

Pakistan and its deep bond with the Grey List

As for Pakistan, in June 2018, a few months before Imran Khan came to power, FATF put the Islamic country on the grey list for being a centre of terror financing. Since then, Imran Khan made several efforts to instrument the exit of the country from the grey list as it would help to bring international investors and loans from multilateral institutions, but none of it worked so far.

Pakistan without the crutches of Turkey, Malaysia or for that matter China is a toothless, frail, and submissive opponent. With Turkey’s future looking bleak, Pakistan in tatters, and Malaysia on a different tangent, the brief chapter of the Islamic Triangle has ultimately come to a close.