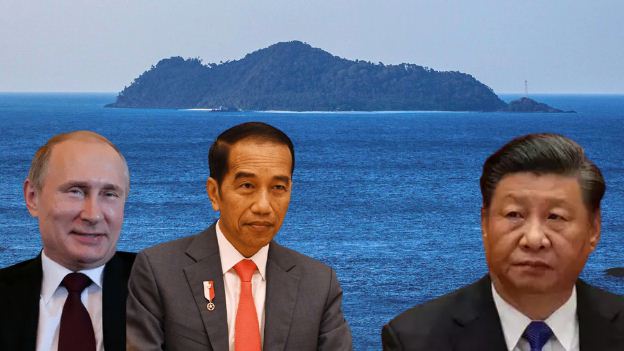 Indonesia is done with China’s bullying, and now it wants to rope in Britain and Russia to fight Chinese bullying. Of course, when someone like Xi Jinping starts bullying you, it makes sense to bring in a man who served as a KGB officer for 16 years.

Anyhow, why is Indonesia bringing in Britain and Russia, and what is the Sino-Indonesia dispute all about?

Joko Widodo was a happy man. I mean you can’t complain about your life, if you grew up as a commoner and ultimately became the President of Indonesia, a country that never had a President from a non-elite political or military background before Widodo.

But if you are the leader of an Indo-Pacific country and that too in Southeast Asia, there is one man who would never let you live happily. Widodo is no exception.

So, what is the Sino-Indonesia dispute all about? Unlike, Vietnam or the Philippines or some other ASEAN countries, Indonesia is not a party to the South China Sea disputes. But Xi Jinping always finds a way to lay claim over other territories. So, the Chinese Communist Party (CCP) said that its “nine-dash” line covers the Exclusive Economic Zone (EEZ) of the Natuna Islands.

And oh yes, I forgot to tell you what the “nine-dash” line is. It is an artificial boundary invented by the CCP that covers most of the South China Sea. And China says that it owns this entire maritime area

China wants to control resources near the Natuna islands

The EEZ is an area extending up to 200 nautical miles from the baseline of a country. While other countries have a right of innocent passage in such territory, a country has special rights regarding exploration and use of maritime resources in its EEZ, to the exclusion of other powers.

Basically, China told Indonesia— you can keep Natuna islands, but we will take away your resources. And when Xi says he owns something, he makes it a point to prevent the actual owner from using his resources.

In fact, China imposes annual summer fishing bans in the South China Sea, because Xi says that this is my sea and I want to have all the fish alone.

Joko Widodo has pursued Indonesia’s traditional diplomatic approach of being equidistant from both the United States and China. Like most other ASEAN countries, Indonesia doesn’t want to take sides between the two rival powers despite all the Chinese bullying.

But Widodo can no longer afford to be passive. Social media rumours have surfaced in the past that have portrayed Widodo as China-friendly and even pro-Communist. Now, Widodo must show that he is still very much an Indonesian leader.

This is why Jakarta is letting a consortium of Britain’s Harbour Energy and Russian state oil company Zarubezhneft lay a pipeline across the North Natuna Sea to connect with Vietnam’s offshore network.

The two companies have already announced that they have found a modest gross gas resource of 600 billion cubic feet. The discovery followed the drilling of two appraisal wells in the Tuna block, about 10 km from Indonesia’s EEZ. The drilling had gone ahead despite Beijing’s claims that the area fell within its self-declared sovereign area called the “nine-dash” line.

Earlier, Indonesia also sought defence technology from New Delhi in a bid to improve its security apparatus and counteract Chinese expansionism in the region, after China once again asked Jakarta to stop oil and gas drilling in the Natuna Islands. Indonesia is also considering sending in fishermen to report irregular activities in the waters, north of the Islands.

Indonesia is, thus, turning increasingly antagonistic towards China. It no longer cares about soft diplomacy and is ready to make Beijing pay for its expansionism.