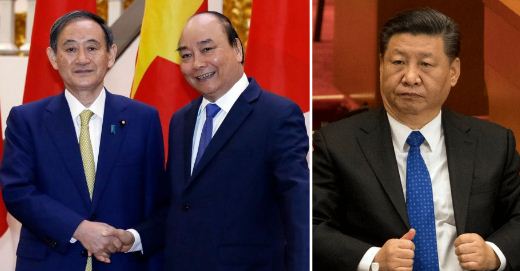 Japan and Vietnam are about to end Chinese President Xi Jinping’s reign of terror in the South China Sea. As per a latest SCMP report, Japanese energy firm Inpex has settled a four-year-old legal dispute against a Singapore-based firm to retain its oil and gas concession with Vietnam in the hotly-contested South China Sea. The Japanese firm has won the right to drill in some of the world’s most fraught offshore fields.

The Vietnamese government has approved field development plans for Blocks 05-1B and 05-1C. With this, Japan and Vietnam are all set to drill oil and gas together. This is a huge setback for Beijing, given that the offshore fields are located within China’s so-called nine-dash line, an imaginary maritime boundary wherein the paper dragon claims 90 per cent of the disputed waterways.

Hanoi has made several attempts to tap into its resource-rich EEZ, but China’s maritime aggression collapses all such efforts. A joint venture between the Vietnamese state energy company PetroVietnam and the Russian giant Rosneft at a nearby field, for example, collapsed under Chinese military pressure.

Operations in another field were halted after a deal between PetroVietnam and Spain’s Repsol fell apart in 2017, allegedly due to Chinese military aggression. Oil and gas exploration companies are generally unwilling to get involved in projects that can get jeopardised due to maritime or any other form of aggression from a third party. This is why Vietnam hasn’t been able to harness its resource-rich Continental Shelf.

However, Inpex is different. It is a Japanese firm, and Hanoi now expects that Tokyo will support it in face of Chinese aggression. Japan and Vietnam have been enhancing defence cooperation with an eye on the common enemy- China. Japan faces similar Chinese aggression in the East China Sea, and has shown interest in countering Chinese belligerence in the entire Western Pacific, including the South China Sea.

As per SCMP, an anonymous official at PetroVietnam said it was understood within the company that drilling would start in 2021. He added, “We have calculated the reaction from China but we have not done anything wrong. We will just drill within our exclusive economic zone.”

So, this time around, Vietnam seems undeterred even in face of Chinese threats. Pham Quang Minh, the former Dean of the University for Social Science and Humanities in Hanoi, said, “Vietnam and Japan are strategic partners, and recently the visit of Prime Minister Yoshihide Suga also reaffirmed their strong relationship, so I do hope they can implement [the deal] in reality.”

Vietnam really feels that unlike the venture with Rosneft and Repsol, its attempt to extract resources in collaboration with Japan’s Inpex won’t fail.

From a Chinese perspective also, a Japanese involvement is a major game-changer. Firstly, China wouldn’t fancy taking on its two regional enemies together in the South China Sea region. Also, China wants to befriend Japan but the Suga administration in Tokyo isn’t reciprocating. Further, annoying Tokyo in the South China Sea is the last thing that Xi would want.

Finally, Xi knows the amount of damage that Tokyo and Hanoi can together cause the Chinese economy. In fact, Japan has been encouraging its manufacturing companies to leave China and relocate their production units in other destinations. Most of the Japanese companies moving to other foreign locations have actually chosen Vietnam.

Now, Vietnam and Japan will drill oil right under China’s nose, and Xi won’t be able to do anything about it even if he really wants to.