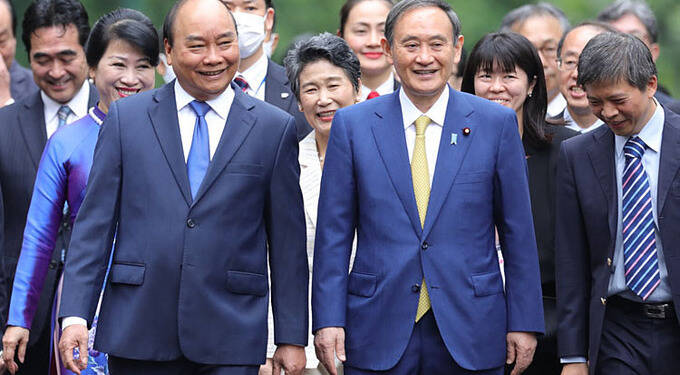 Vietnam, a country with historical animosity against Beijing, is poking the paper Dragon in the South China Sea (SCS). China claims the entire SCS, including its big and small geographical features. But guess what? A Japan-backed Vietnam simply doesn’t care.

For Japan, Vietnam has emerged as a key strategic partner in the Western Pacific. This is a natural partnership, isn’t it? China has been flexing its muscles in Japanese waters near the Senkaku Islands in the East China Sea for the past year. At around the same time, the paper Dragon also started flexing its muscles in the South China Sea. Beijing has been bullying all other claimants in the SCS region including Vietnam.

So, Vietnam and Japan soon realised that they are essential facing the same menace- a big, fat bully called China. So, the two started cooperating at an elevated level. Japan is a superpower, while Vietnam is one of the fastest growing world economies. So, it made a lot of sense for Tokyo and Hanoi to gang up on Beijing.

In the Abe era, Japan incentivized its manufacturing companies based in China to shift production out of the Middle Kingdom and relocate to other destinations. Many of these companies chose Vietnam as their new destination. But this was just the beginning as the Japan-Vietnam partnership has now touched upon more critical sectors like drilling and defence.

After coming to power, Japanese PM Yoshihide Suga sent across a big message by choosing Vietnam for his first overseas trip. Speaking to reporters along with his Vietnamese counterpart Nguyen Xuan Phuc, Suga had then described Vietnam as a “cornerstone” of the “Free and Open Indo-Pacific” policy and “our valuable partner”. He also promised to continue contributing towards “peace and prosperity in the region”.

During the same visit, Japan and Vietnam had also agreed to boost defence ties, in an attempt to push back against Chinese aggression. Suga and Phuc were also able to finalise a basic agreement paving way for exporting Japanese defence equipment and technology to the Southeast Asian nation.

It does not seem like a coincidence that after Suga’s Vietnam visit, Hanoi has been growing increasingly assertive about its maritime rights and its ability to defend itself against Chinese intrusions. Last month, Vietnam’s newly appointed Foreign Minister Bui Thanh Son too made it a point to start off his stint by pledging stronger cooperation with Japan.

One of the first things Son did was to call up his Japanese counterparts and “exchange views on international and regional matters of shared concern, including East Sea issues (Vietnamese reference to SCS disputes).”

Read More: Biden has suddenly developed spine against China over Taiwan and France and Japan should be thanked for it

And then, Suga also had a telephonic conversation with Phuc earlier this week. Suga conveyed that Japan “strongly opposes” China’s growing military assertiveness. He also conveyed concerns about “unilateral attempts to change the status quo in the East and South China seas.”

In fact, Suga also brought up the issue of a recent Chinese law that empowers its Coast Guard to open fire against ships it perceives as intruding on its territory.

At the ground level also, Vietnam has been pushing back against Chinese belligerence. Vietnam’s maritime militia is expanding itself in the South China Sea, in a bid to challenge Beijing’s acts of aggression. China itself is, of course, deeply worried about the Vietnamese militia. Collin Koh, the maritime security research fellow at Nanyang Technological University in Singapore, said, “They (Vietnamese militia) are trying to expand the maritime militia.”

Koh added, “The idea is that the existing maritime militia needs to expand its manpower.”

Read More: France Army to train alongside Japan’s ‘Marines’. It’s a bold message to both China and the USA

Meanwhile, Vietnam has also started partnering with Japanese firms in joint drilling ventures. Earlier, Hanoi was unable to harness similar drilling projects in partnership with other countries in its Exclusive Economic Zone (EEZ) because of the South China Sea disputes. Beijing used to act aggressively against any such commercial joint venture involving Vietnam and force companies from other countries to run away.

But Japan is here to stay. It is ready to tackle Chinese aggression while pushing ahead with joint drilling projects in the region.

The fact remains that Vietnam is challenging Chinese hegemony. It is Hanoi which is using maritime militias, joint drilling projects with Japanese firms and infrastructure proposals to deny China’s claims over disputed features like the Spratly Islands. However, it is actually Japan which is emboldening Vietnam. By challenging China in its backyard, Suga is actually humiliating Xi Jinping.