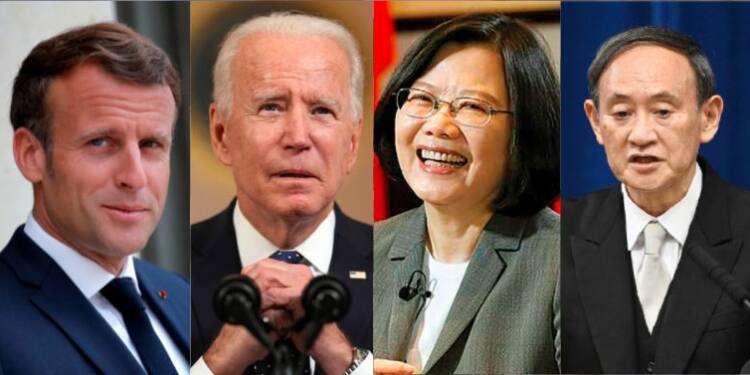 When Biden stormed to power in the United States, there were clear signs of a meek surrender before China. The Biden administration had given China a free pass in every possible region- be it the Senkaku Islands in the East China Sea or the disputed features in the South China Sea. More importantly, Biden was even letting Chinese President Xi Jinping mount pressure on the island nation of Taiwan.

But suddenly it seems as if Biden has developed a spine against China over Taiwan. The US Secretary of State Antony Blinken has even called on the World Health Organisation (WHO) to include Taiwan with an observer status in the 74th World Health Assembly (WHA). However, the Biden administration is actually supporting Taiwan under a strong compulsion from France and Japan to take a tough stance on China.

Blinken said, “There is no reasonable justification for Taiwan’s continued exclusion from this forum (WHO).” The top US diplomat affirmed that “Taiwan is a reliable partner, a vibrant democracy, and a force for good in the world.”

He added, “Its exclusion from the WHA would be detrimental to our collective international efforts to get the pandemic under control and prevent future health crises.”

It is no coincidence that the US Secretary of State has emphatically endorsed Taiwan’s WHO participation, at a time when France and Taiwan have been pushing back against Chinese military aggression targeting the island nation.

In fact, G-7, the group of most advanced world economies, has been warning China not to escalate tensions with Taiwan amidst growing military tensions. G-7 includes both Japan and France, and they have been clearly using all their influence in the powerful intergovernmental bloc to mount pressure on the US for supporting Taiwan.

France itself has been getting increasingly supportive of Taiwan, as part of President Emmanuel Macron’s push to make Paris an Indo-Pacific power. Recently, the French Senate passed a resolution to back Taiwan’s participation at the WHO, the International Criminal Police Organization (Interpol), the International Civil Aviation Organization (ICAO), and the UN Framework Convention on Climate Change (UNFCCC).

France has strategic interests in guarding the Indo-Pacific region such as the overseas territory of New Caledonia in the Southern Pacific. On the other hand, Japan is a regional power, which wants to tame the growing Chinese hegemony.

Tokyo has been facing the China threat right in its backyard, with Chinese vessels frequently intruding into the Japanese waters near the Senkaku Islands. In this context, Japan understands the importance of emboldening Taiwan.

Japanese Prime Minister Yoshihide Suga has been constantly forcing Biden into pledging support for the island nation, in case China makes an aggressive move aimed at invading Taiwan. Also, Japan has been teaming up with Taiwan in anticipation of Chinese aggression against the island nation. As such, Japan and Taiwan are looking to form a common military front against China.

Japan and France are mounting unbearable pressure on the Biden administration. And Biden has no answer- he will have to take on China and support Taiwan, whether he wants to or not.