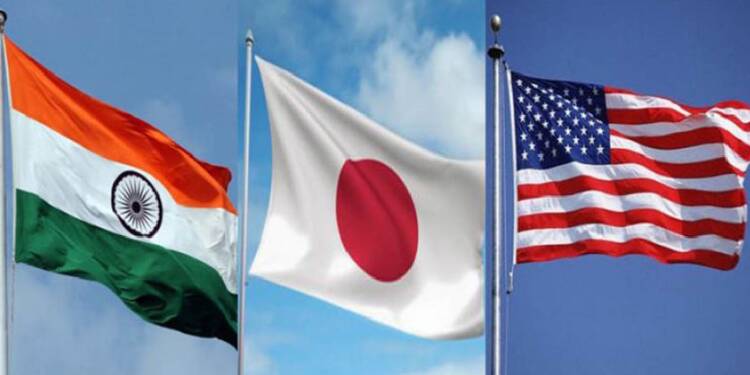 Former Japanese PM Yoshihide Suga recently appeared in an interview and acknowledged the pertinence of India in Japan’s national interests and for maintaining the stability and security of the Indo-Pacific region. He said that the Quad would lose its relevance in the Indo-pacific region without India’s inclusion in it.

But it seems American President Joe Biden and Japanese Prime Minister Fumio Kishida have taken a resolution to sideline India in the Indo-pacific region. Since India didn’t take an anti-Russia stance amid the Russia-Ukraine conflict, Biden is finding all possible means to exclude India’s mark in the region. And Kishida is facilitating Biden in accomplishing the task.

Nevertheless, recent instances suggest that Biden is desperate to weaken India’s position in the Quad and the Indo-Pacific region. For instance, recently in one of his addresses, Biden said, “The Quad is, with the possible exception of India being somewhat shaky on some of this, but Japan has been extremely strong — so has Australia — in terms of dealing with Putin’s aggression.” He further added, “We presented a united front throughout NATO and in the Pacific.”

Biden’s statement turned into a fiasco for two reasons; One, he called India’s stance on the Russia-Ukraine conflict ‘shaky’, and the other, he used the term ‘Pacific’ instead of using ‘Indo-Pacific’.

Adding to the folly, recently US-led NATO’s chief during a meeting with Japanese Prime Minister Fumio Kishida referred to the Indo-Pacific as the “Asia- Pacific”. This instance reiterated the notion that Biden wants to undermine India’s role in the region. And it seems Kishida is trying to hold up Biden’s jarring stance on India.

Also read: NATO attempts to undermine India and Quad in the Indo-Pacific

Anyway, Japan and India have been sharing a long history of cultural and civilizational ties. In recent years, their economic and strategic partnerships have steadily expanded and deepened.  Under Shinzo Abe, the former Japanese PM, the relationship between the two reached its zenith. A strong bond between Japan and India gave meaning to the relevance of the security alliance ‘Quad’ in the Indo-pacific region.

Shinzo Abe also put right Japan’s relations with Russia despite their clashes over the Kuril Islands. But Kishida seems to have turn-the-tide! He not only took a tough stance against Russia amid the Russia-Ukraine conflict but is also trying to undermine India’s position in the Quad by supporting Biden’s stance on India’s role in the region.

In a recent statement, Former Japanese PM Yoshihide Suga said, “Protecting this framework of the four countries (QUAD) will be extremely important for the peace and safety of the free and open Indo-Pacific”. He further added, “If we think of Japan’s national interests, it will be important to keep India in the 4-way grouping”.

With these statements, Suga is trying to caution Kishida that his misguided stance on Russia and India’s role in Quad should be amended before it’s too late. Kishida needs to comprehend the fact that the Quad was formed to contain China in the region and India is the only way out to suppress China’s rise. The comments made by former PM Suga hold relevance because Suga is a close aide of former PM Shinzo Abe, who leads the biggest faction of the ruling Liberal Democratic Party (LDP). By undermining India’s role in Quad, Kishida is not only deteriorating Japan-India ties but also letting China off-hook.