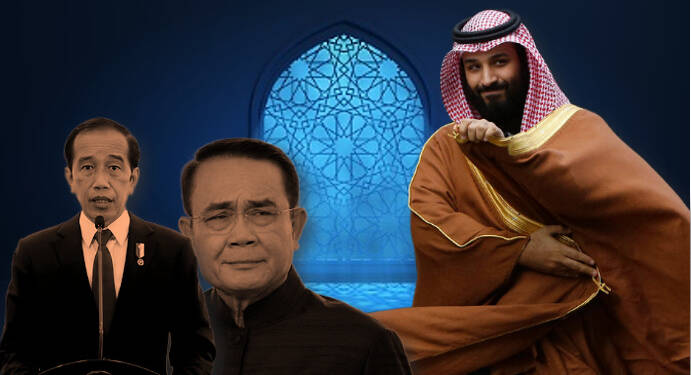 Read more: Forget Saudi Arabia, move over Iran and ignore Turkey – The UAE is the king of the Muslim World

So, how can Saudi Arabia retain its leadership of the Muslim world? Well, the country has a clear plan in hand; Embrace Southeast Asia and ride on their influence to retain leadership. It is therefore courting ASEAN countries with significant Muslim populations, viz. Indonesia, Malaysia, and Thailand.

Earlier this month, Saudi Arabia reached out to the country with the largest number of Muslims, Indonesia.

The two sides discussed ways to enhance military and defense cooperation, as well as regional and global issues concerning the two sides.

In fact, the two sides have enhanced bilateral cooperation and exchanges in the defense sector over recent years. During 2014-2022, Indonesia sent 178 military officers to Saudi Arabia for attending different courses in the country such as countering extremism.

Meanwhile, another Muslim country in the region, Malaysia also looks to deepen its ties with Saudi Arabia.

Earlier this month, the two sides agreed to come up with attractive initiatives that would help both Saudi Arabia and Malaysia boost their tourism and culture industries.

It stated, “Malaysia rejects all forms of violence and calls on the international community to intensify efforts to end the hostilities which will be detrimental to maintaining peace and stability in the region.”

Thailand’s case is different from Malaysia and Indonesia. It is a Buddhist-majority country. However, Muslims comprise the largest religious minority in Thailand and constitute around 4.3% of its total population.

Anyhow, Thailand has millions of Muslims. So, despite being a Buddhist-majority country, Thailand does hold some influence in the Muslim world.

This is why Saudi Arabia is reaching out to Thailand despite a forgettable history of diplomatic tensions, dating back to 1990 when an invaluable 50-carat blue diamond and other jewels were stolen from the Saudi royal palace by a Thai janitor.

Thai police later claimed that it had nabbed the thief. But the jewels returned to Saudi Arabia by Thai authorities were found to be forged. Things went from bad to worse when three Saudi diplomats in Bangkok trying to find the stolen diamonds were shot down by Thai gunmen. A Saudi businessman who traveled to Thailand in search of diamonds was kidnapped and his body never got recovered.

So, you don’t really need to ask why Saudi Arabia and Thailand didn’t enjoy good bilateral relations for the past three decades or so.

Yet, the two sides seem to be cooperating on normalizing relations now. In January 2022, Thai Prime Minister, Prayuth Chan-o-cha, visited Saudi Arabia in what seemed like a strong signal to improve bilateral ties. The two countries are now looking to cooperate in crucial sectors like tourism, energy, and petrochemicals.

Why Saudi Arabia has chosen Southeast Asia for reaffirming its leadership?

Saudi Crown Prince Mohammed bin Salman Al Saud (MBS) is a progressive leader. And it suits him to reach out to Muslim countries in Southeast Asia. This part of the world doesn’t face much radicalism, so Riyadh won’t be facing any competition from extremist players like Pakistan and Qatar.

Also, working with relatively prosperous and diversified ASEAN countries can help MBS achieve Saudi Vision 2030. Ultimately, Riyadh wants to move away from a single-sector economy based on crude oil. Working with ASEAN countries help Saudi Arabia tap into sectors like tourism and unlock the massive potential of religious tourism in Saudi Arabia.

Saudi Arabia is home to the two holiest cities in Islam- Mecca, and Medina. Saudi Arabia can therefore work with Malaysia and Indonesia to boost incoming tourism from these countries. And then, ASEAN countries themselves won’t have much of an issue in accepting Saudi Arabia as the leader of the Muslim world.