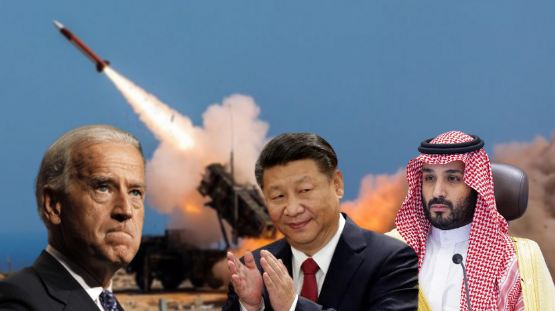 When Biden came to power, he announced, “I want the world to hear today: America is back. America is back.” Well, but nothing like that is happening. If for anything, Biden’s accession to power has pushed US allies into China’s arms. Take Saudi Arabia for instance. Saudi Arabia is one of Washington’s frontline allies in a volatile Middle East region. But after coming to power, Biden started side-tracking Saudi Arabia.

He was trying to bully Saudi Arabia, cancel Trump-era US-Saudi deals and grill the Saudi monarchy over human rights allegations. So, Saudi Arabia has now decided to land in China’s lap and build its ballistic missiles with China’s help.

In what could be the biggest setback for Biden since he came to power earlier this year, Saudi Arabia has reportedly started building its missiles with the help of China, as per US intelligence assessments and satellite images. Satellite images obtained by NBC News too suggest that Saudi Arabia is making its ballistic missiles at a site west of Riyadh.

Jeffrey Lewis and David Schmerler of the James Martin Center for Nonproliferation Studies at the Middlebury Institute said, “The key piece of evidence is that the facility is operating a ‘burn pit’ to dispose of solid-propellant leftover from the production of ballistic missiles.”

The two added that the site “appears to have been constructed with Chinese assistance.”

Why Saudi Arabia is making its ballistic missiles

It is to tackle the Iran threat. For Saudi Arabia, the Iran nuclear programme is a big issue. Saudi Arabia understands that under Biden’s rule, Iran has become larger than life.

Biden wanted to revive his former boss Barack Obama’s legacy by prompting Iran to return to the Joint Comprehensive Plan of Action (JCPOA), or the Iran nuclear deal, which was scrapped by Trump in 2018. To placate Iran, Biden gave the Shi’ite country a lot of leverage.

This has exposed Riyadh to Iran’s sabre-rattling, especially after the election of an ultra-conservative Ebrahim Raisi as Iran’s President.

So, Saudi Arabia feels that it needs ballistic missiles that can carry both conventional explosives and nuclear weapons. Riyadh is therefore wary of Tehran’s nuclear weapon ambitions and is looking to counter them with its missiles programme.

At the end of the day, Saudi Arabia’s sudden embrace of China is more of a political issue. It is not a strategic issue.

Biden is the one who irked Saudi Crown Prince Mohammed bin Salman, the de facto leader of Saudi Arabia, first up. After coming to power, Biden halted the sale of F-35s to the UAE and sale of weapon systems to Saudi Arabia, as the two deals were finalised during the Trump era and Biden wanted to cancel his predecessor’s diplomatic achievements.

During Trump’s stint as the US President, MBS emerged as one of the most important US allies. This is the reason why a vindictive Biden wanted to punish MBS. After all, MBS was a persona non grata for Joe Biden from the campaign days who had vowed to bring justice to the victims of 9/11 attacks and release a classified U.S. intelligence report on the murder of Jamal Khashoggi.

“We are going to make them pay the price and make them, in fact, the pariah that they are,” Biden had said in an election campaign last year. Biden did try to walk the talk after he assumed the presidency and announced to release the confidential intelligence reports signalling MBS’ glaring role in Khashoggi’s murder.

MBS is upset about Biden’s shenanigans. So, he decided to land the Biden administration in a tight spot by collaborating with the main US rival- China. MBS is thus serving a warning to Biden- if you keep needling me, I will have no hesitation in working with your enemy, Xi Jinping.