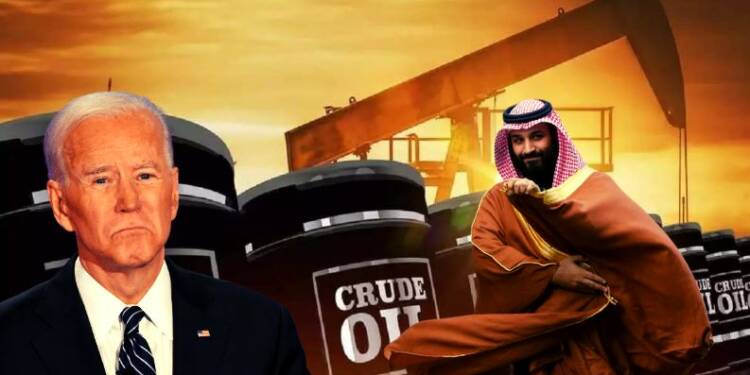 The Arab world, led by Saudi Arabia and the UAE, has mostly remained silent on the ongoing Russia-Ukraine war. The UAE, a non-permanent member of the UN Security Council, has already expressed its non-alignment strategy by abstaining from UN resolutions over Ukraine.

And Now, Saudi Arabia also seems to have prioritized Russia and has decided to stick to it its pledge to remain committed to the OPEC plus agreement reached July last year.

Following its invasion of Ukraine, Moscow is facing widening sanctions from the West. Due to disruptions in the energy supply chains originating out of Russia, fuel prices have surged to record levels across the globe.

Hence, western nations are increasingly calling on OPEC nations to shore up oil supplies. Make no mistake, only Saudi Arabia and the UAE have spare capacity to boost oil production and mitigate the impact of throttled oil exports from Russia.

However, much to the west’s disappointment, Saudi Arabia has now declined to break away from the OPEC plus agreement. Crown Prince Mohammed bin Salman made the comments during a conversation with French President Emmanuel Macron.

Read More: Here is why UAE abstained from voting against Russia in the UN

MBS makes no bones about its commitment to the OPEC+ agreement

The Saudi Press Agency reported that “In this regard, His Royal Highness the Crown Prince affirmed the Kingdom’s keenness on the stability and balance of oil markets and the Kingdom’s commitment to the OPEC Plus agreement.”

OPEC plus agreement was reached last year involving 23 major oil-producing nations like Russia and Saudi Arabia. These nations had pledged to collectively increase output each month by 400,000 barrels a day, beginning in August 2021.

Reuters recently quoted various OPEC sources confirming that the oil-producing nations will stick to the original agreement despite vehement pressure from the US and expanding sanctions on Moscow.

Saudi Arabia prefers Russia over the US

Saudi Arabia has so far resisted the calls from the US to increase oil output to dampen the red-hot market. Oil prices have rallied to their highest levels in over seven years this week on tight supply and disruptions to crude exports from Russia, and now Saudi Arabia’s rejection to expand oil production is all set to exacerbate the situation.

Heightened inflation is a big electoral issue in the US before the upcoming mid-term elections, and MBS’s unrelenting attitude over oil production may very well drive Biden’s re-election ambitions into the ground. It will also give Russia an upper hand in the Russia-Ukraine crisis, and it will prevent the west from imposing harder sanctions on the Russian energy sector.