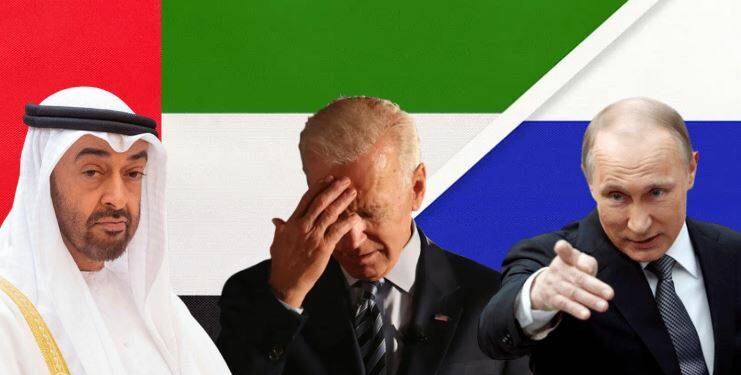 The United Arab Emirates abstained from voting on a United Nations resolution condemning Russia’s invasion of Ukraine. Eleven countries had backed the resolution presented by the United States and Albania, while China, the UAE, and India abstained.

For many seasonal western analysts, this development came as a surprise. While India and China have considerable relations with Russia, the vote from UAE came out of nowhere. However, for anyone who has been following our reporting and closely monitoring UAE, this was an obvious choice.

The declining importance of the US under the disastrous leadership of Joe Biden in the Middle East has made Washington lose many allies. For the longest time, Russia has been the only stabiliser in the region and the UAE is very well aware of the same. Since the Arab Spring, UAE is well aware of the fragility of order in the region and with Joe Biden abandoning its allies, closer cooperation with Moscow is the best option.

UAE is diversifying its weapons supply chains away from the US

Having mediated the Abraham Accord between Israel and the UAE, Trump took the US-UAE relations one step further by finalising an agreement to sell fifth-generation aircraft to the UAE. However, as soon as Joe Biden came to power, he started bullying his own allies because they had cooperated with Donald Trump. An angered UAE paused talks on a $23 billion contract to buy fifty F-35 fighter jets following the USA’s warning of scrapping the deal.

Read more: Israel, Russia, UAE and France have finally defeated the US in the Middle East

Instead, the UAE placed an order for 80 Rafale fighter jets, strengthening economic and diplomatic ties with France through a $19.20 billion arms deal. The weapons order from France was a part of the larger change in UAE’s policy. UAE decided to move entirly away from depending on the US to diversify its weapons imports and thereby increasing its strategic autonomy.

Washington has been withdrawing from the Middle East and Northern Africa (MENA) region steadily, and this has created a vacuum. Most Arab powers especially the UAE (United Arab Emirates) find this vacuum extremely concerning. The USA’s retreat emboldens not just Iran, but also accompanying destabilising factors and thereby increasing the possibility of regime change civil wars. And so, countries in the region feel a need to look for alternative options.

An illustration of America’s flawed Middle East policy is the US intervention in Syria. Timber Sycamore was initiated by the CIA to depose Syrian President Bashar al-Assad, but it was defeated by Russian intervention. Russia prevented the United States from committing yet another historical blunder, which could have resulted in the ploughing of Syrian soil to produce Islamist movements. Now, the Middle East is increasingly tilting towards Russia.

When we say the Middle East and North Africa, we mean the entire region stretching from Afghanistan to Morocco is Central Asia, and even the Horn of Africa, with Ethiopia, can be clubbed along. That is the basic map of influence that Russia has carved for itself, in recent times.

Against this backdrop, Russia-UAE relations are developing in a positive direction. If we take the case of Ethiopia, things become absolutely clear. The Biden administration has further hinted at a direct intervention, accusing Ethiopia of human rights abuses. However, the UAE, an American ally, is now supporting the Ethiopian government in its fight against the TPLF.

Read more: UAE, Russia and Israel form a new power bloc in the Middle East. US left out

When it comes to Russia, it commands tremendous respect in Ethiopia. In fact, such is the admiration for Russia in the African nation, that its citizens regularly wave the Russian flag on the streets. In the larger Horn of Africa region as well, Russia and UAE find their interests converging.

In line with this, on Wednesday, just hours before Putin announced the start of military operations against Ukraine, UAE Foreign Minister Sheikh Abdullah bin Zayed Al Nahyan called for strengthening ties and deepening cooperation in a call with his Russian counterpart Sergey Lavrov. Sheikh Abdullah announced hours before the vote on Friday that he would visit Moscow on Monday to strengthen bilateral ties.

While considering these factors, it is clear that UAE understands that for securing its interests, Russia is more important than an unreliable America.

Zelensky’s psyops may make for good media and social media stories, but they are useless on the ground