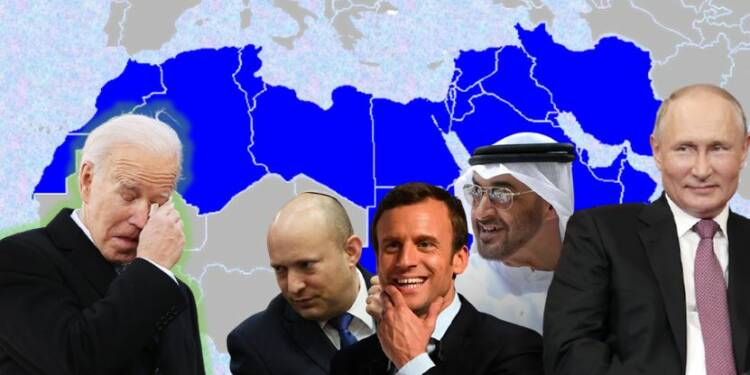 The recent actions of the United States of America (USA) under the Biden administration signal a sea of change in the capability to influence the geopolitics of the Middle East & North Africa (MENA) region. The country was deciding the policies of the MENA region during the Trump administration, but now, it has become a non-factor and a reactionary power. Now, regional stability is the top priority and a new group of countries are building on the legacy of the Trump administration in pursuit of the same. Countries like United Arab Emirates, Israel, France and Russia, are increasingly becoming the enablers of a new geopolitical approach to the Middle East.

Two recent instances in the MENA region have proven the plummeting US geopolitical fortunes in the region. Firstly, after ostracising Crown Prince of Saudi Arabia Mohammed bin Salman (MBS) for the longest time, a top State Department official said that Saudi Arabia was a strong and a “very capable” partner in the fight against terrorism. Secondly, the UAE paused talks on a $23 billion contract to buy fifty F-35 fighter jets, as well as drones and advanced weapons, earlier this week, following the USA’s warning of scrapping the deal. All in all, the region has changed a lot, and the new power centres are influencing this change.

Over the last few months, the UAE has emerged as the driving force behind the Arab world’s foreign policy, with Arab diplomacy achieving enormous success on virtually every front in which the country has been involved. Warming relations with the Turks and the Iranians have been the two most significant achievements of Mohammed bin Zayed’s diplomatic manoeuvrings.

The United Arab Emirates just launched a $10 billion fund to help Turkey’s ailing economy. Officials estimate that overall investments in Turkey might reach $100 billion, if relations improve. In order to please the Arab leadership, Turkey has already begun cracking down on anti-Arab and pro-Muslim Brotherhood views.

Similarly, Iran is eager to revise its anti-Arab policies, and is actively working with the UAE to do so. Iran’s senior nuclear negotiator recently paid a visit to Abu Dhabi, where the two countries emphasised the importance of enhancing and deepening bilateral ties. With its well-crafted diplomacy and adept bargaining abilities, the UAE is ideally positioned to eliminate the Arab world’s two main adversaries on its own.

President Biden began playing ‘hard-to-get’ as soon as he took office and left the sale of F-35 fighters and other weaponry to the UAE, which the Trump administration had already cleared. Biden believed he could bully the United Arab Emirates and get away with it. Biden would have probably gotten away with intimidating the UAE if things had gone his way. However, with his botched AUKUS deal in September, Biden antagonised yet another foreign leader: French President Emmanuel Macron. Ultimately, two of Biden’s main haters, Mohammed bin Zayed and Macron, got together and punished him for his bully tactics.

Early this month, the UAE placed an order for 80 Rafale fighter jets and 12 military helicopters, strengthening economic and diplomatic ties with France through a 17 billion euro ($19.20 billion) arms purchase. As French President Emmanuel Macron began a two-day tour to the Gulf, where he visited Qatar and Saudi Arabia, the largest ever foreign sale of the French warplane was signed. The French President’s visit to the Gulf, along with the massive weapons transaction, has the foreign policy establishment humming. France is stepping in to fill the void left in the Middle East by Joe Biden’s poor foreign policy.

An illustration of America’s flawed Middle East policy is the US intervention in Syria. Timber Sycamore was initiated by the Central Intelligence Agency (CIA) to depose Syrian President Bashar al-Assad, but it was defeated by Russian intervention. Russia prevented the United States from committing yet another historical blunder, which could have resulted in the ploughing of Syrian soil to produce Islamist movements. As it prepares for re-entry into the Arab League and a better future, Russia has saved Syria from becoming another Libya or Iraq.

Also read: History shows Russia is the power of good in the Middle East, not the USA

This demonstrates how Russia has remained a force for good in the Middle East. It understands how to detect the region’s pulse. It knows how to navigate the region’s difficult political terrain. This also helps to explain why Russia is becoming a major player in the Middle East on almost every front, from Libya to Syria, and from the Arab world to Iran and Turkey.

Israel’s increased cooperation with the Arab world and decreasing differences:

The Middle East and the North Africa regions have been going through some huge changes, and as things stand, analysts are trying to not miss even the minutest of details of the actions of regional powerhouses. This reality, coupled with the fact that the Abraham accords have taken shape, countries like Egypt who have already normalised relations with Israel, are finding it easier to cooperate with the Jewish nation (given the absence of any significant criticism from the Arab world).

Israel has realised the significant leverage it currently holds, and this is why it wants to gain larger recognition regionally, as well as cooperate with the larger allies to deal with the menace of Hamas. If Israel is successful in dealing with Hamas, it will become easier for other Arab countries which have still not normalised relations to work closely with Israel. Be it Saudi Arabia, or now even Qatar, the countries are increasing their economic cooperation with Israel’s private sectors. This can very well be interpreted as the precursor for more vibrant politico-economic relations which can offset any reservations for normalisation.

All in all, these four countries, namely, France, UAE, Israel and Russia, are working in their own capacities to diffuse as well as solve the issues which have kept the region unstable for the longest time. These countries have taken upon themselves the task which the MENA region had bestowed over to the USA for decades. However, as the Biden administration follows a very flawed policy, the above-mentioned Quad is filling the void left by a pragmatic Trump Middle East policy.