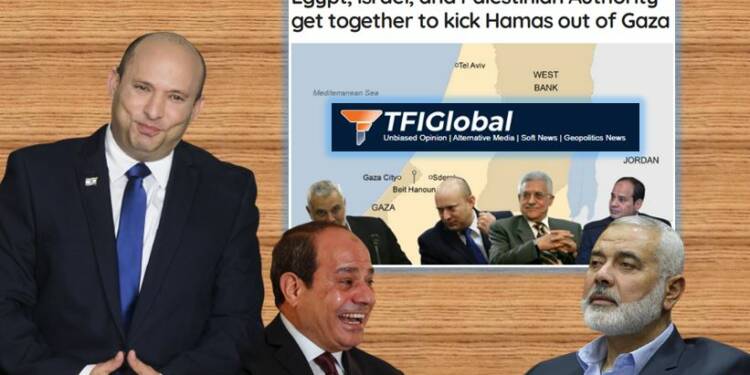 The fortunes of Hamas have been on a steady decline for quite some time. A combination of economic and geopolitical containment of Hamas has been progressing consistently, courtesy of the Abraham Accord countries. TFI had already reported on how Israel is working with Egypt and the Palestinian Authority (PA) to kick Hamas out of Gaza. Now, considering the latest reports, it can be said with surety that Israel is inching closer to the annexation of the Gaza strip. According to Middle-East Monitor, Egypt does not wish to reconstruct Gaza Strip facilities and homes destroyed by Israel’s assault.

However, the report did point out that Egypt is working on a number of other important initiatives in the besieged enclave. Naji Sarhan, Deputy Housing Minister of Hamas, stated at a press conference on Sunday that Egypt has begun construction on three residential complexes that were sanctioned before Israel’s assault on Gaza in May 2021. These reports come just after Israeli Foreign Minister, Yair Lapid, visited Cairo on December 9, for talks with top Egyptian officials. The talks were largely focused on the situation and future course of action in Gaza.

Hamas is frustrated over Egypt’s restoration work in Gaza:

Egypt is working on other projects but is avoiding the buildings destroyed by Israel during its retaliation to Hamas’s attacks in May. Most of these buildings that were demolished were being used by Hamas, and the fact that Egypt is specifically avoiding them means that Egypt and Israel are on the same page when it comes to removing Hamas from the entirety of Gaza Strip.

In addition to this, a few days ago, the frustration of the widely designated terrorist group Hamas was out in the open, as a Hamas source accused Cairo of not honouring pledges to Hamas and other Palestinian factions concerning reconstruction and aid for Gaza.

According to The Times of Israel, a top Hamas official indicated that his terror group was considering the renewal of violence in Gaza while criticising Egypt for serving as a mediator between the two sides. Egypt, according to the source, is stopping many Palestinians from exiting Gaza through the Rafah border crossing.

In addition to this, Gaza’s Deputy Housing Minister from the Hamas-run government also said that the construction is progressing very slowly due to Israel and Palestinian Authority’s obstacles regarding the transfer of money to Gaza.

These statements one after another indicate an obvious frustration within the Hamas fold, given the way in which PA, Israel and Egypt are collaborating against Hamas.

The Middle East and the North Africa regions have been going through some huge changes, and as things stand, analysts are trying to not miss even the minutest of details of the actions of regional powerhouses. This reality, coupled with the fact that the Abraham accords have taken shape, countries like Egypt who have already normalised relations with Israel, are finding it easier to cooperate with the Jewish nation (given the absence of any significant criticism from the Arab world). Israel has realised the significant leverage it currently holds, and this is why it wants to gain larger recognition regionally, as well as cooperate with the larger allies to deal with the menace of Hamas.

Previously, an article at TFI had predicted the dynamics of the collaboration among these three sides, which is as follows: the West Bank is being eyed by Hamas, and the Fatah-ruled Palestinian Authority, which governs West Bank, is not planning to let the Gaza-based organisation have a free run in its territories.

So, Israel might just have an unnatural partner in the form of Fatah, which will perhaps in the future, help Gaza become a part of Israel, while the West Bank is turned into a formal Palestinian state. This would kill Hamas, and lead to Israel gaining control over Gaza. Meanwhile, Tel Aviv will also have an amiable partner in the form of Fatah ruling over the West Bank.

This dynamic between the PA and Israel is only one aspect of the larger picture where Egypt too is in close cooperation with Israel. The agreement reached between senior Egyptian and Israeli military officers on November 7 in the Red Sea resort city of Sharm el-Sheikh has revealed the two allies’ collaborative efforts.

Also read: Israel prepares for a two-front war against Hamas with Egypt on its side

Israel has now formally given the Egyptian military more control over the border area and more latitude to fight the Islamic State-affiliated extremist groups in the northern Sinai peninsula. Given the fact that it will also put an end to the supply of weapons to Hamas, it is going to address Israel’s security concerns.

The increased presence of Egyptian forces in the Sinai peninsula coupled with the economic containment of Hamas by Israel and PA suggests that the region is moving closer to a definitive solution vis a vis Hamas; the developments have already been covered by TFI.

With the fact that Egypt is intentionally leaving out all of Hamas’ infrastructure that was destroyed by Israel buttresses, TFI’s prediction about Israel’s annexation of the Gaza strip is moving a step closer to fruition.