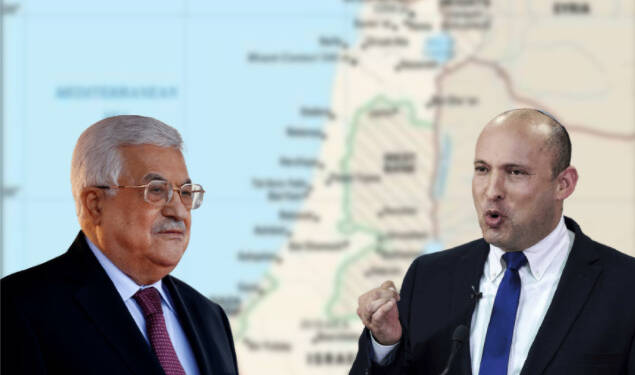 The Palestinian Authority – which governs the scattered West Bank territories has come out to openly support a two-state solution to the Israel-Palestinian conflict. This support for an internationally recognized two-state solution came when Palestinian Authority President Mahmoud Abbas met with Pope Francis on Thursday. The PA President also met with Italian Prime Minister Mario Draghi and several senior Vatican officials.

The broad consensus reached in the aftermath of all these meetings was that for lasting peace to be established in the Middle East between Israel and Palestine – a two-state solution must be immediately worked upon.

Of course, Palestine has in the past rejected a feasible two-state solution on umpteen occasions – leading to the Jewish nation of Israel abandoning all efforts to walk on that path again. Now, for PA President Mahmoud Abbas to vouch for a two-state solution after meeting with the Pope is indeed significant and comes in the backdrop of a larger consensus being formed between Israel and the PA that they both need each other to decimate Hamas – which is in control of the Gaza Strip.

What is the Vatican Saying?

The Vatican is in firm support of a two-state solution between Israel and Palestine. To the same effect, “it was stressed that it is absolutely necessary to reactivate direct dialogue in order to achieve a two-state solution, also with the help of more vigorous effort on the part of the international community.” It “reiterated that Jerusalem must be recognised by all as a place of encounter and not of conflict, and that its status must preserve its identity and universal value as a Holy City for all three Abrahamic religions.”

On their part, both Pope Francis and Mahmoud Abbas agreed that it is necessary to reactivate direct talks between Palestine and Israel to achieve a two-state solution, with the help of more vigorous efforts by the international community. The two leaders spoke about the “urgency of working for peace, avoiding the use of weapons and combating all forms of extremism and fundamentalism.”

So, the Vatican has subtly stated against Palestinian terror organisation Hamas. And supporting such a statement is the Fatah-led Palestinian Authority!

West Bank for Palestine and Gaza Strip for Israel?

Essentially, it’s going to be a win-win situation for everyone except Hamas. A two-state solution at its very core must be a win-win situation for both Israel and the Palestinian Authority. So, given Mahmoud Abbas’ recent statements and the meetings between Israeli cabinet ministers and Palestinian officials – the two sides may be working out a deal wherein the PA retains control over a consolidated West Bank, while Israel gets authority to govern the Gaza Strip.

Read more: Can Israel and the Palestinian Authority come together to turn Gaza into an Israeli territory

For a Fatah-led PA – nothing could be better. Essentially, Israel helps it strengthen its position in the West Bank, while it also obliterates its political rival – Hamas in the Gaza Strip, rendering it powerless to effectuate any sentimental change within the West Bank.

Meanwhile, Saudi Arabia is gearing up to recognise Israel and establish official bilateral ties with the Jewish nation. This will serve as yet another setback for Hamas and its sympathisers – a bulwark whose approach has been the alienation and targeting of Israel internationally. A Jewish-American delegation has recently discussed the normalisation of ties with senior Saudi officials in Riyadh.

So, Israel and the Palestinian Authority are activating channels of settlement between them, while Hamas is slated to emerge as the sole loser in the aftermath of it all. While Israel will have the Gaza Strip, the PA will settle for the West Bank.