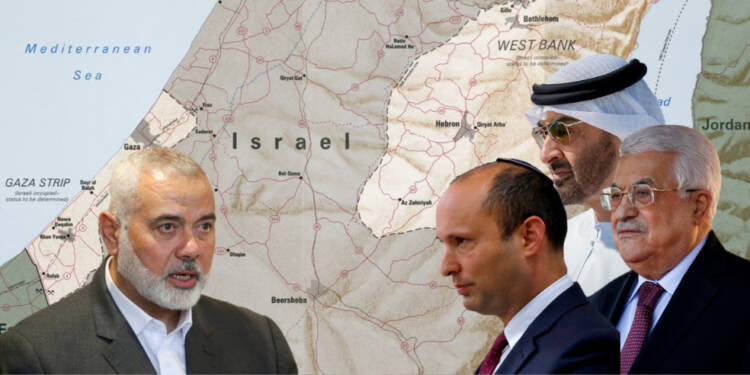 An alliance between UAE, Israel and Palestinian Authority is coming up to decimate Hamas.

The bombshell UAE-Israel peace deal of 2020 had angered the Palestinian Authority (PA) vehemently, prompting it to downgrade its diplomatic relations with the UAE. The deal was termed as “political betrayal” by the Palestinian leadership. One year down the line, the relations between the two are back on track. The UAE and PA are believed to be working on a possible reconciliation. Interestingly, an Israeli minister has announced this upcoming alliance.

“In the coming days or weeks, we will see positive progress in the UAE-Palestine relations. I saw positive intentions and desire on both sides,” Israeli-Arab Minister of Regional Cooperation, Issawi Frej, was quoted as saying by Middle East Monitor. “Next month or before the end of the year, there will be tangible results for the ongoing efforts,” the minister further added.

The PA and Israel have already signalled to bury the hatchet, and now an alliance between the UAE and PA will put the Palestinian Authority on good terms with the Abraham Accord partners. Israel has come forward to bail out the PA’s sinking economy, ratcheting up Israel’s cachet among the Palestinian leadership. It was revealed in August that the Israeli government was reportedly in talks with the Palestinian Authority to transfer hundreds of millions of shekels to Ramallah. Moreover, Israeli defence minister Benny Gantz also had talks with the PA president Abbas, which marked the first-ever high-level engagement between the two sides in a decade.

Read More: Israel and the PA have announced their alliance to root out Hamas from Gaza

Israel banking on the conflict between Fatah and Hamas

Palestine and Israel share fierce boundary conflict; however, internal fault lines in Palestinian leadership have provided Jerusalem a fortune moment to further its interests. Hamas is a shared threat for both powers. While Hamas has involved itself in waging all-out wars against Israel on several occasions, it also views the PA as the biggest obstacle in its way towards usurping the West Bank.

Hamas is not despised by Israel and the PA only, but by the UAE too. The UAE designates Hamas as a terrorist organisation, and it had urged the Arab world to follow its suit in June this year after a fierce clash between Hamas and Israel. The UAE’s Foreign Minister Abdullah bin Zayed had then criticised the failure to designate Hamas, the Muslim Brotherhood as terrorist organisations. “It is ridiculous that some governments only call the military branch of an organization terrorist and go beyond its political branch, while there is no difference between them,” bin Zayed had said.

Moreover, the UAE had warned Hamas of halting its infrastructure initiatives in the Gaza strip after Hamas’ military offence against Israel. Globes, a Hebrew-language financial newspaper, had then quoted a senior Emirati official as saying, “We are still ready and willing to promote civil projects in cooperation with the Palestinian Authority and under UN management [in Gaza], but our necessary condition is calm.”

The 11-day war between Israel and Hamas failed to secure any sympathy from the PA that perceived it as Hamas’ attempt to boost up its plummeting approval ratings. The chief leader of terrorist outfit Hamas, Ismail Haniyeh’s approval ratings stood at piteous 37 per cent before it went to war with Israel. However, his approval ratings skyrocketed to 47 per cent as soon as the war engulfed the entire Gaza region.

Read More: Hamas leader killed Hundreds of Gazans just to secure another term as the chief of the terrorist outfit

Many were confused upon seeing Hamas celebrating the ceasefire with Israel as some sort of a spectacular victory which it had registered over the IDF. However, the truth is that Hamas was simply jubilant about the fact that it had successfully established itself as the face of Palestinian ‘resistance’ to Israel after the recent hostilities, thus displacing Fatah and the PA president Mahmoud Abbas.

Now, as the UAE, PA and Israel come together to reconcile their efforts against Hamas, the Iran-backed group not only will be rendered useless but non-effective too. Hamas’ death will be seen as a major strategic victory by both Israel and Fatah. With UAE on board, already precarious Hamas will only see itself mired in deeper troubles.