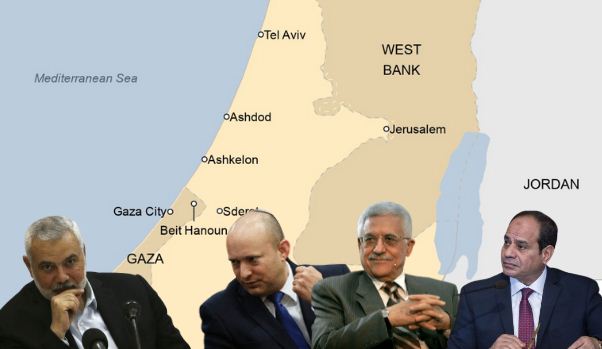 The Middle East and North Africa region has been going through some tectonic changes and as things stand, analysts are trying to not miss even the minutest details of the actions of regional powerhouses. This reality coupled with the fact that since the Abraham accords have taken shape, the countries like Egypt who have already normalised relations with Israel are finding it easier to cooperate, given the absence of any significant criticism from the Arab world. Israel has realised the significant leverage it currently has and this is why it wants to gain larger recognition regionally as well as cooperate with the larger allies to deal with the menace of Hamas.

In such a background, the new Shin Bet security service chief Ronen Bar making consecutive visits to Ramallah and Cairo tells the burgeoning undercurrent of cooperation among these three entities to further stability and weed out the extremists and destabilisers like Hamas. Last week, he met with Palestinian Authority President Mahmoud Abbas to coordinate Israeli and Palestinian efforts to counter Hamas’ influence in the West Bank and destabilising movements in Gaza. Bar also paid his first visit to Egypt on Sunday after being appointed to the job last month, to meet with Intelligence Chief Abbas Kamel.

Despite the fact that there are presently no public peace discussions with the Palestinian Authority, the new Israeli government, which took office in June, has taken initiatives to build confidence with the Palestinians. In August, Defense Minister Benny Gantz met with Abbas for the first time in almost a decade, marking the first public meeting between high-ranking Israeli and Palestinian officials. Gantz urged for the fragile PA to be bolstered as a bulwark against Hamas and other terror groups at a press conference following the meeting. Then, in October, the left-wing Meretz party’s Health Minister Nitzan Horowitz and Regional Development Minister Isawi Frej met with Abbas in Ramallah.

Read more: West Bank for the PA and Gaza Strip for Israel: This land division equation could be true soon

Israel-Egypt relations are on an upward trajectory

The increased Egyptian military presence in Gaza also curtailed arms and people trafficking, as well as denying Egyptian extremists a safe haven in Gaza, which has been dominated by the terrorist Hamas group since 2007. “We have troops permanently positioned along the border with Israel for the first time in nearly five decades,” said military analyst Sameer Farag, a former army general and a veteran of the 1973 Mideast conflict. “This arrangement was brokered by President El Sisi, and Israel consented because it already has enough on its plate dealing with Hamas in Gaza and Hezbollah in Lebanon.”

Read more: Israel prepares for a two-front war against Hamas with Egypt on its side

As has been extensively covered by TFI, the militarization of the Sinai Peninsula, as well as the increased presence of Egyptian forces, already suggests that the region is moving closer to a definitive solution vis a vis Hamas. Israel is preparing for a two-front battle against Hamas, in this backdrop, the visit of Shin Bet secret services’ chief to Ramala and Cairo respectively puts further food for thought.