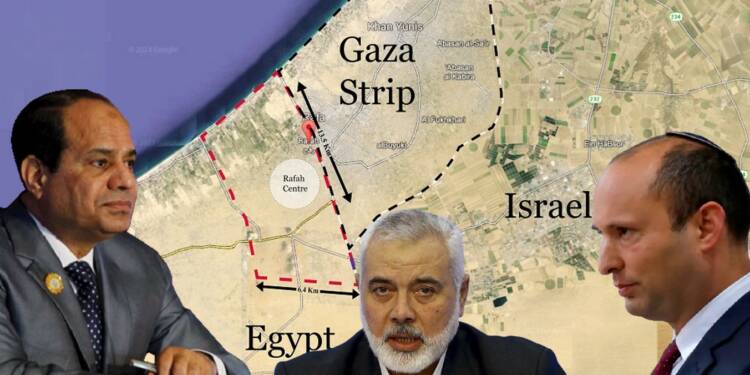 The Middle East and North Africa (MENA) region has long been fraught with instability and constant revolutions. However, since the Abraham accords have taken shape, the countries like Egypt who have already normalised relations with Israel are finding it easier to cooperate with Israel, given the absence of any criticism from the Arab world. In line with the larger consensus of stabilising the region, Israel is preparing for a two-front war against Hamas as Egypt has come out resolutely on its side. After establishing a coordination arrangement with neighbouring Israel, Egypt announced Monday it was increasing forces around Rafah in restive Sinai in the fight against Islamic State extremists.

There are no details on how many additional soldiers will be dispatched, but it is the first agreed-upon force boost since 2018. “A joint military committee succeeded (during a coordination meeting with the Israeli side) in amending the security agreement to increase the number and capabilities of border guards near the Rafah crossing,” Egyptian armed forces spokesperson Gharib Abdel Hafez said on his official Facebook page on Nov. 8.

Egypt-Israel relations on the rise:

The security pact mentioned by Abdel Hafez is an addendum to the 1979 Camp David Peace Accords signed by late Egyptian President Anwar Sadat and then-Israeli Prime Minister Menachem Begin, which allows Egypt to keep a civilian police force solely in the Sinai Peninsula’s eastern strip. With the strengthening of ties between Cairo and Jerusalem in recent years, as well as Egypt’s ongoing military battle against Islamist extremist groups waging an insurgency in the northern Sinai Peninsula, this has changed.

According to analysts, the agreement was the result of years of negotiations between the two countries, which were successfully concluded when Egyptian President Abdel Fattah El Sisi met with Israeli Prime Minister Naftali Bennett in September for the first time in more than a decade. According to observers, the agreement codifies what has been happening on the ground for years but on an ad hoc basis. In recent years, Israel has enabled Egypt to send troops, armour, and air assets against militants fighting security forces in Sinai’s north-eastern corner on a case-by-case basis.

The current situation and the importance of the deal:

The increased Egyptian military presence in Gaza also curtailed arms and people trafficking, as well as denying Egyptian extremists a safe haven in Gaza, which has been dominated by the terrorist Hamas group since 2007. “We have troops permanently positioned along the border with Israel for the first time in nearly five decades,” said military analyst Sameer Farag, a former army general and a veteran of the 1973 Mideast conflict. “This arrangement was brokered by President El Sisi, and Israel consented because it already has enough on its plate dealing with Hamas in Gaza and Hezbollah in Lebanon.”

Israel’s Gaza interest and preparation for a two-front war:

Read more: West Bank for the PA and Gaza Strip for Israel: This land division equation could be true soon

In the background of this possibility, the militarization of the Sinai Peninsula and the increased presence of Egyptian troops goes on to show that the region may be getting ready for a final solution. With the Palestinian Authorities taken in confidence, and Egypt-Israel relations at an all-time high, Israel is preparing for a two-front war against Hamas.