UAE, Russia and Israel form a new power bloc in the Middle East. US left out 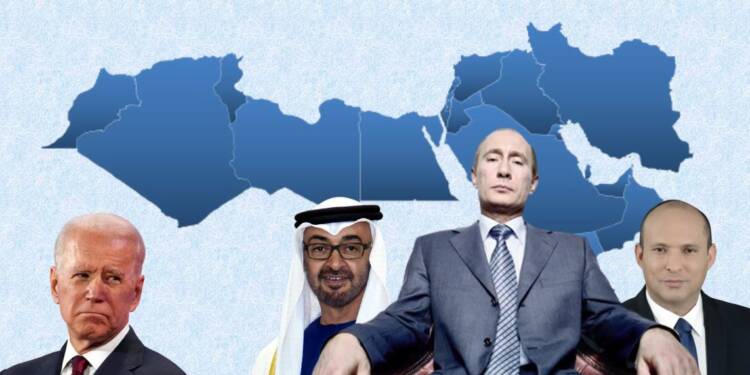 When it comes to the Middle East, Mediterranean and north Africa, the United States does not really have any friends. Washington has been withdrawing from the region steadily, and a vacuum is emerging. Most Arab powers, especially Saudi Arabia and the UAE (United Arab Emirates) are not liking this vacuum. The USA’s retreat emboldens not just Iran, but also Turkey. And so, countries in the region feel a need to look for alternative options. Now, Middle East is increasingly tilting towards Russia. When we say Middle East, we mean the entire region stretching from Afghanistan to Morocco is Central Asia, and even the Horn of Africa, with Ethiopia can be clubbed along. That is the basic map of influence which Russia has carved for itself, in recent times.

A lot is happening in the Middle East. However, in order to give you a coherent and simplified view of what all is underway in the region, we have come up with the ‘Russia-UAE-Israel Power Bloc’.

The Russia-UAE-Israel power bloc is still developing and solidifying itself. What can definitely be said at this moment about the new power bloc is that it has no American influence anywhere around it. If anything, the power bloc is going to be a big hurdle in the path of a Democrat-led American military-industrial complex to keep the Middle East perpetually entangled in conflicts.

Let us break down this power bloc for you in the following manner:

The Wagner Group is a Russian paramilitary organization. Some have described it as a private military company (or private military contracting agency), whose contractors have reportedly taken part in various conflicts, including operations in the Syrian civil war on the side of the Syrian government and during the annexation of Crimea in 2014-15.

The Wagner Group is also said to be active in Libya, fighting on behalf of the General Khalifa Haftar-led Libyan National Army (LNA) forces. The Wagner Group – it can be safely said – receives orders from the Kremlin directly, for such high-stakes conflicts. Where Vladimir Putin does not want Russian soldiers fighting with a cocktail of factions and nations, he deploys the Wagner Group.

Now, according to an explosive and insightful report by World Politics Review, the Wagner Group is receiving support and funding from the United Arab Emirates for its operations in Libya. Libyan elections are slated to be held on December 24, and two presidential candidates – General Khalifa Haftar and Saif Gaddafi (son of Muammar Gaddafi) have the backing of the Wagner Group and Russia.  If either Haftar, Gaddafi or both advance to the second round of voting, there is a decent chance that one of them could win the presidency. Either way, that sets up the very real prospect of the Wagner Group entrenching its position in Libya, and a possibility that Abu Dhabi and Moscow will deepen their cooperation across the Middle East.

Is the U.S. in any manner involved in this dynamic alliance?

Israel is all set to turn the Libyan equation upside down. The son of Libyan warlord Khalifa Haftar reportedly visited Israel last week for a secret meeting with Israeli officials, in which he offered to establish diplomatic relations between the two countries in return for Israeli support. Along with him, several Libyan aides of General Khalifa Haftar arrived in Israel onboard a private plane, that took off from the UAE.

Also read: Israel joins the UAE to end the Libyan war with a Haftar victory and an Abraham Accord

Mind you, Haftar and his forces are supported by Russia. Now, the LNA is asking for Israeli help in order to decisively overthrow the Turkey-backed GNA government in Libya. Israel will definitely march in to help Haftar’s forces, as that is the only way the Jewish nation can secure its own strategic and security interests, and also deepen partnership with Russia and its Arab allies.

Where is the United States of America in this equation?

UAE and Russia’s cooperation on Afghanistan:

The UAE is currently providing a safe haven to deposed Afghan President Ashraf Ghani, who fled Afghanistan in August after the Taliban took control of the country. Along with him, several other senior Afghan leaders have taken refuge in the UAE. Both Russia and the UAE agree that a Taliban-ruled Afghanistan is a threat for the region at large, and therefore, both are extending help to resistance forces led by Amrullah Saleh and Ahmed Masood.

At the behest of Russia, Tajikistan is said to have provided refuge to both Amrullah Saleh and Ahmed Masood and their forces. Central Asian countries, particularly Tajikistan, are in agreement when it comes to the question of trying to arm anti-Taliban forces. Tajikistan is even said to have put its armed forces on alert for any anti-Taliban operations that they may be required to go ahead with.

Additionally, both Russia and UAE are wary of a China-Pakistan-Afghanistan nexus trying to destabilise south and central Asia.

Is the USA a part of this equation?

No. It is the one which messed up in Afghanistan big time.

On the Yemeni island of Socotra, Israeli tourists have become a common sight. And their footfall is rather unprecedented, and it is rather new. Interestingly, the UAE is in control of the island of Socotra in the Gulf of Aden. The Emiratis have a military base on the island which is used to collect intelligence on maritime traffic in the Bab El-Mandeb Strait and the Gulf of Aden.

Also read: Israel may have joined the Arabs in the Yemen war against Iran-backed Houthis to bring the war to a swift decisive end

Last year, it was reported that the UAE and Israel were working on a plan to establish a spy base in the Yemeni island of Socotra. Effectively, the Iran-backed Houthis are rattled. Potential Israeli spies and commandoes are landing right in their backyard with the overt support of Saudi Arabia and UAE. Why else, pray tell, would Israeli tourists suddenly be interested to visit a Yemeni island?

Meanwhile, the Abraham Accord between Israel and the UAE is opening up a new era in the Middle East. It is going to revolutionise energy trade in the region by reinvigorating the Trans-Israel pipeline, which will assure smooth trade of Gulf oil into the Mediterranean and further north into European markets.

There are many more areas in which a UAE and Israel partnership can be spotted, listing all of whom will require a separate analysis altogether.

Is the United States a part of this partnership?

Russia and Israel’s ‘Scratch My Back’ partnership:

Russia and Israel are really in a strange relationship. They both are taking care of each other’s interests, while also making sure to not make their partnership public. In Syria for instance, Russia is rather large-hearted and tolerant of Israeli airstrikes and bombings. It is also not averse to the fact that Israel is in possession of the Golan heights, which if brought under Syrian control, can prove to be a gamechanger. However, Russia is allowing Israel to keep those heights.

In exchange, Israel has not really condemned the coup in Sudan, which by the way, Russia is supportive of. The fact remains that Israel considers the Sudanese military a great friend. During the run-up to normalisation of relations between Israel and Sudan, the civilian government led by Abdalla Hamdok was reluctant to embrace the Jewish nation due to adverse public opinion while the Sudanese military seemed favourable.

Israel is one of America’s staunchest allies. So, it makes sense for Moscow and Tel Aviv to keep their relationship secret. So, is the United States being kept out of yet another equation in the larger Middle East? You bet it is.

Russia and UAE’s interests converge in Ethiopia and the Horn of Africa:

US President Joe Biden has lost the plot in the Horn of Africa. In fact, even key US allies in the Middle East do not seem to agree with Biden’s outrageous and interventionist policies.  Take the case of the UAE helping Ethiopia to protect its sovereignty. The US, which wants to expand its influence in the landlocked country, has allegedly been supporting the TPLF (Tigray People’s Liberation Front) for the last 20 years. The Biden administration has further hinted at a direct intervention, accusing Ethiopia of human rights abuses. However, the UAE, an American ally, is now supporting the Ethiopian government in its fight against the TPLF.

When it comes to Russia, it commands tremendous respect in Ethiopia. In fact, such is the admiration for Russia in the African nation, that its citizens regularly wave the Russian flag on the streets. In the larger Horn of Africa region as well, Russia and UAE find their interests converging.

All across the Middle East, the UAE-Russia-Israel power bloc is active and is making a name for itself. The United States of America’s absence is very noticeable, but ever since Obama’s Arab Spring misadventure, Washington had such a crisis coming its way. Soon, the United States faces the prospect of being turned into an irrelevant entity in the Middle East, while the new three-nation power bloc consolidates its power and influence.

Shinzo Abe has stormed back into Japanese politics. In Style