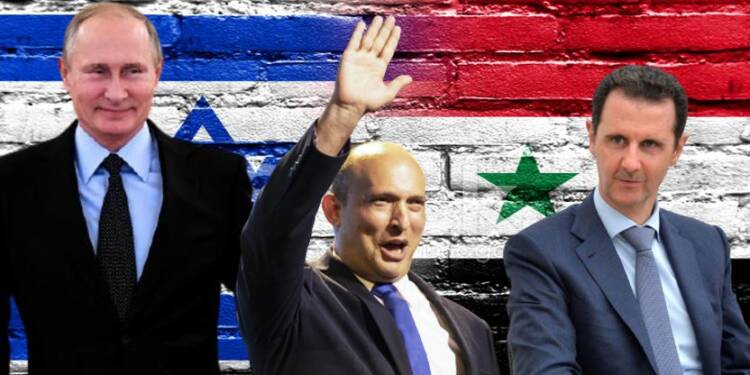 Russia and Israel have always backed opposing parties in Syria. Russia is among the few staunch allies of the Bashar al-Assad regime in Syria, whereas Israel has always hoped to see Assad’s departure from Damascus. However, geopolitical equations in the war-torn country are now undergoing a major strategic shift, owing to the blood and sweat of policymakers in Moscow. Russia is striving to bring Arabs and Israel closer to the Syrian regime, and the results will be devastating for Iran, for which Syria serves as a gateway to Hezbollah and a strategic tool to weigh down Israel’s anti-Iranian adventurism.

Russia approaches Israel to get sanctions relaxed on the Syrian regime:

Media reports suggest that Moscow is in talks with Jerusalem over encouraging the US to relax sanctions on the Assad regime so that Russia can undertake reconstruction work in Syria. As per an Axios report, Moscow wants to make deeper inroads into the Syrian economy, by taking over numerous reconstruction projects, thus helping its companies boost their revenues. Israeli Prime Minister Naftali Bennett and Russian President Vladimir Putin last Friday had held discussions over the issue, where the latter had expressed worries that US sanctions could hinder Russian projects in the country.

If Israel manages to get the US to relax some sanctions on the Moscow-backed Assad regime in Syria, Jerusalem would be able to position itself as a major influential power in the country. Moscow has already accorded Jerusalem with the impunity to carry out airstrikes against Iranian assets in the country, thus further emboldening Israel and undermining Iranian interests over there. This was a radical shift in Moscow’s approach as it had never shied away from publicly expressing its displeasure over the IDF’s military operations in Syria in the past.

Moscow’s re-alignment of its Syrian policy reflects its growing bonhomie with Jerusalem and the miseries of Tehran. Another move that manifests Moscow’s fallout with Iran is its disbanding of a pro-Iran militia near the Israeli border. The 8th Brigade, comprising 10,000 fighters, was being funded by Russia to fight along with the Assad regime and Iran against the rebel forces. But Russia now wants the 8th brigade to submit all its arms and weapons back to Russia, paving way for Hezbollah, Iran and Israel to contest over the region close to Israel’s Golan. And now with Israel having the freedom to barrage its rivals on Syrian soil, the Russian move has put Iran and Hezbollah in a precarious position.

Also read: What’s cooking between Russia and Israel in Syria and is Biden watching?

Apart from Israel, Russia is also bringing the Arab world closer to the Assad regime. Jordan, Egypt, the UAE, Saudi Arabia and Oman – all these nations have now made overtures to Damascus. All of their efforts to reignite ties with Syria and the Assad regime are reportedly being driven by Russia, which wants to set a consolidated support base for itself in the Middle East, and it is not possible unless it ensures Syria’s return to the Arab League.

So, it won’t be long before Syria is re-included into the Arab League, and that would simply mean a screeching death of Iranian interests in the country. Iran has spent a humongous amount of money and resources to set a foothold in the region. Syria serves as Iran’s gateway to Hezbollah and also another front to ramp up military pressure on Israel. Syria is one of the few key allies of Iran in the Arab world, and Syria’s normalisation of ties with Israel and the Arabs would simply render the Syrian-Iranian ties utterly defunct.

Also read: Arab world is embracing Bashar-Al-Assad. And it’s Russia that’s making them do so

Golan Heights: From “The issue” to “An issue”:

If Moscow’s efforts to make Israel and Syria bury the hatchet are any indication, the Golan Heights conflict is no longer the paramount issue for the precarious regime of Damascus. Israel has grown more assertive over the Golan region in the past few months, which has invited a colder-than-usual reaction from the Syrian regime. Also, as Moscow and Jerusalem develop more understanding over the issue, Damascus will highly likely keep away from raking up the boundary conflict with Israel.

Undoubtedly, Russia and the Assad regime have realised that normalising ties with the Arabs and the Jewish nation is the only way forward for shoring up Damascus against its rivals. On the other hand, Iran’s growing ties with China have also emboldened Russia to re-align its policy in the Levant region in favour of Israel. With its already sinking fortunes in Iraq and Lebanon, the imminent setback in Syria will irreparably paralyse Iran’s regional domination ambitions.