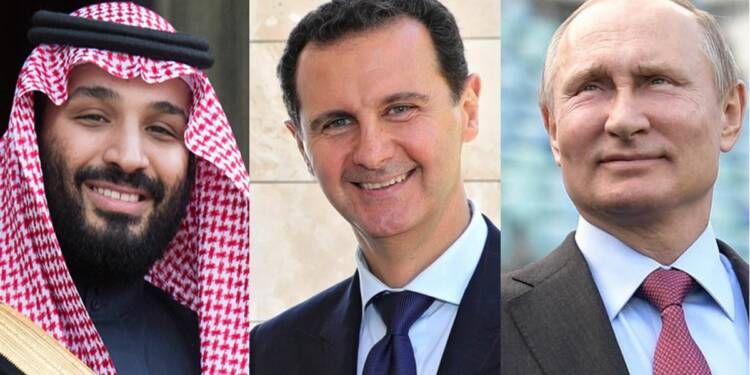 It was in November 2011 that Syria was expelled from the ‘Arab League’, following the Barack Obama-promoted Arab Spring protests initiating a bloody civil war in Syria, and also having ripple effects across the Middle East. The Arab world, led by the likes of Saudi Arabia, UAE and Qatar joined the United States’ regime-change war in Syria and supported anti-Bashar al-Assad forces in the country. Those regime change efforts have fallen flat on their face, and with the backing of Russia, Bashar al-Assad has emerged as possibly the biggest giant slayer in the Middle East, who successfully resisted the entire force of the United States and its allies for no less than a decade.

However, in the past decade, the Middle East has seen some fundamental changes. The Arab world has gone on from being close to the United States, to now, rethinking its overreaching friendship with it. A sense of distrust has come to exist between the Arab world and Washington, and Russia has made full use of this distrust to carve a space for itself in the crucial region. Today, Russia commands influence over several Arab states and has taken concrete steps to fill in the vacuum which the U.S. is leaving behind.

There has been no regime change in Syria. Bashar al-Assad is still in power. Efforts to dislodge him have failed miserably, and the Arab world seems to have concluded that it is in their best interests to normalise ties with Syria and welcome it back into the Arab League. So, Jordan’s King Abdullah II, who backed regime change in Syria and allowed weapons to be funnelled through his kingdom to opposition rebels, spoke to Syrian President Bashar al-Assad last Sunday. This was followed by Jordan reopening its sealed borders with Syria. The talks came as a first in over 10 years after the Syrian civil was triggered by the Muslim Brotherhood and the Obama administration.

Late last month, Egypt’s Foreign Minister Sameh Shoukry met his Syrian counterpart, Faisal Mekdad, for the first time in nearly 10 years. Shoukry told ON TV last month that he discussed with the Syrian minister the steps needed for Syria to get out of its crisis and regain its position as an active party in the Arab world. According to AL-Monitor, Egypt is taking a lead role in ensuring the return of Syria to the Arab fold, as Shoukry said, “Now that the military battles [in Syria] have tapered off, we must have a role in reinstating communication, to explore the necessary steps that will lead to preserving the Syrian people’s capabilities and getting out of the crisis to restore Syria’s position in the Arab world.”

AL-Monitor also reported recently that the United Arab Emirates, Oman, and Egypt have already made overtures to Damascus while Saudi Arabia is said to be engaged in informal talks with the Assad regime as well. All of their efforts to reignite ties with Syria and the Assad regime are reportedly being driven by Russia, which wants to set a consolidated support base for itself in the Middle East, and which is not really possible unless it ensures Syria’s return to the Arab League.

Read more: After a decade-long war, the West finally surrenders and Assad emerges as the giant slayer

Last year, in a meeting between Saudi Foreign Minister Faisal bin-Farhan and his Russian counterpart, Sergei Lavrov, a call was issued for Syria’s “return to the Arab family.” This was followed up in May 2021 by a Saudi delegation led by the kingdom’s intelligence chief arriving in Damascus and meeting with Assad and the head of Syrian intelligence. Shortly after, a Syrian delegation led by the minister of tourism paid a visit to Saudi Arabia, and Syria’s defence minister paid a rare visit to Jordan on September 19.

Meanwhile, at an August 2021 conference in Baghdad, attended by leaders of Egypt, Jordan and Saudi Arabia, Iraqi Prime Minister Mustafa al-Kadhimi declared “a new page in relations with Syria.”

Turkey To Restore Ties with Syria?

The most significant of events that would be a part of the larger Syria-reacceptance plan would be for Turkey to restore ties with Syria. And if the chatter is anything to go by, Turkey might actually be looking to call an end to hostilities with Bashar al-Assad under a quid pro quo programme. Turkey’s spy chief who oversees relations with the Turkish-based Syrian opposition and a constellation of armed groups has been holding secret talks with the Syrian head of the National Security Bureau, Ali Mamlouk.

Recently, Turkish President Recep Tayyip Erdogan, at the behest of Russia perhaps, even went on to say that if it were up to him, the United States would withdraw its forces from northeast Syria and Iraq “as they did from Afghanistan.” This marks the first time Erdogan has publicly said he wants US forces to leave Syria.

According to AL-Monitor, Turkey might be looking to make a deal with Bashar al-Assad’s regime, which would allow Assad to retake the rebel-held province of Idlib and back his claims that the country is safe for the return of refugees. This, in turn, would persuade the international community to release funds for Syria’s reconstruction. In exchange, Turkey would have unfettered freedom to go after Kurdistan Workers Party targets in Syria. This would also be an acceptable deal for Assad, as the Kurds – who are recipients of U.S. support are in control of the country’s major oil fields, dams, and agricultural land.

What cannot be ignored is the fact that the Arab world is cohesively trying to reinvigorate relations with Syria at the behest of Russia. If Moscow’s campaign to ensure the entry of Syria back into the Arab League is indeed successful, Putin will be victorious in his campaign to occupy a critical position in the region, which the U.S. has historically reserved for itself.

Just as China prepared to extract coal from its own mines, heavy rainfalls sealed them shut