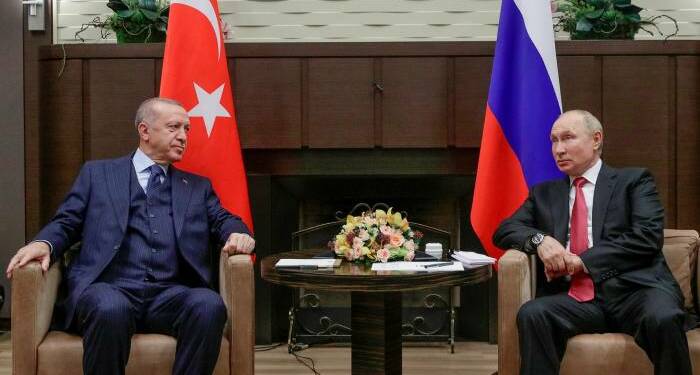 Russia is beginning to flex its muscles against Turkey. Vladimir Putin knows that Turkish madman Recep Tayyip Erdoğan is in a bit of a fix with the United States. In his bid to impress Putin, Erdogan upped the ante against Biden. He recently called the US “a supporter of terrorists” when Biden refused to meet him on the sidelines of the UNGA. Soon after making this comment, Erdoğan travelled to Russia to meet Putin. So, the Kremlin now knows for a fact that the Turkish president is desperate, and that Turkey is fast becoming the weakest link within NATO. So, Russia is now beginning to play its own game with Ankara.

Recently, in a subtle but severe message to Turkey, the editor-in-chief of the Russian state TV channel RT said Russia should annex eastern Turkey’s Mount Ağrı (Ararat) and Kars province. According to the Daily Sabah, Simonyan’s controversial comments followed similar remarks by Russian politician and leader of the Liberal Democratic Party of Russia Vladimir Zhirinovsky, who claimed that a “special” tsar-like regime was necessary to secure Armenia.

The Russian leader belonging to Putin’s party said, “Any democratic regime like the U.S., U.K. or France is unacceptable (for Russia). And you, Armenians, will get both Kars and Ardahan if there’s a strict regime like (the rule under) a tsar. Under a democratic government, even Yerevan will be taken away from you.”

Why do you think Russia is suddenly showing signs of interest to annex parts of Eastern Turkey, specifically those which in the past have had significant populations of orthodox Christians who identify themselves as Armenians and not Turkish citizens? Because Turkey has a bruised past with Armenia. During World War I, the then Ottoman Empire, which has today shapeshifted into Turkey committed cultural genocide against Armenians, in which no less than 1.5 million Armenians were killed. Most of these massacres took place in Eastern Turkey, which is the same region that Russia has begun eyeing for itself.

Russia is sympathetic towards Armenia. And therefore, by being able to control territories currently under Turkey’s jurisdiction, Russia will be able to not just secure its own interests in the Black Sea, but will also undercut the threats posed to Armenia by Turkey.

Opportunism is the word that best defines Russia’s love for Ankara. Russia’s larger objective is to nullify its influence in the region by decimating Turkey’s allies and proxies. For Russia, Turkey is not only a big defence market but also a tool to destabilize NATO. There is not a scarcity of contentious issues between Moscow and Ankara, and Syria is the biggest one among them. Turkey and Russia support opposing camps in Syria resulting in a clash of their interests.

If Russia’s recent escalation in Syria’s Idlib against Turkey-backed forces is any indication, Putin is sparing no chance to cash in upon Erdogan’s misery. And now, with the Kremlin getting commentators and political leaders from Putin’s party to stake claim over Turkey’s eastern provinces, Erdogan is surely in for a rude shock, but he seems to have prostrated before Russia too much already, prematurely so.

Russia is looking to secure its larger geostrategic position across Eurasia. And Turkey is in control of some very important territories which Moscow would want for itself. In any case, Moscow depends on the Black Sea for access to the Mediterranean and beyond, both for military operations outside its immediate neighbourhood and for exports of Russia’s main commodity – hydrocarbons.

Russian Response to Turkish Drone Sales to Ukraine and Poland?

Turkey has decided to sell 24 armed attack drones to Poland, while talks regarding a similar deal with Ukraine are also said to be progressing between Kyiv and Ankara. Turkish drones played an instrumental role during the Nagorno Karabakh conflict, as Azerbaijan fired fury upon Armenian assets using such attack drones. Therefore, the potency of Turkish drones to be a gamechanger in conflicts has not been given a miss by Moscow.

Read more: By selling attack drones to Ukraine and Poland, Turkey is dangerously provoking Russia and Putin’s reaction will be fierce

What Turkey is doing by selling such attack drones to Lublin Triangle countries of Poland, Ukraine and possibly Lithuania is not just an exercise in flexing its muscles, but is a direct affront to Russia’s national security. The Russian territory of Kaliningrad – which is not a part of the Russian mainland but instead borders Poland and Lithuania, comes at the centre of Moscow’s concerns regarding Turkey’s latest moves.

Kaliningrad also shares its western border with the Baltic Sea. The protection of Russia’s sea communications and of its energy exports are among the most important tasks of Kaliningrad, apart from being a humongous Russian base in a region, which is rather hostile towards Moscow. By arming Poland with attack drones, Turkey is threatening Russian control over Kaliningrad. It does not require an incredible genius to conclude that in case of a conflict, Poland would use these attack drones against Kaliningrad.

So, Russia’s moves to signal its intent to take control of East Turkish provinces is not something that should come as a surprise to anybody. Turkey has been needling Moscow the wrong way for quite some time now. Moreover, Erdogan has also made it clear to Putin that without Moscow, Turkey will stand to become a crippled nation. Now, Putin is looking to use Turkey like a doll, and Erdogan has nobody but himself to blame.