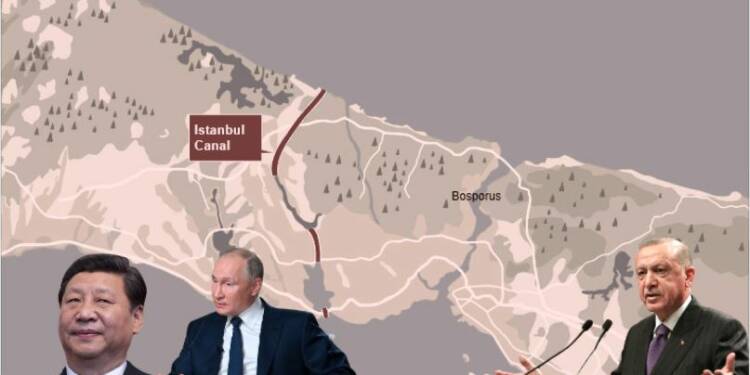 Russia and China are on collision course all over again- this time in the Black Sea. Moscow has been getting annoyed by Beijing’s tendency to eat into Russian influence in all regions including the Arctic, Eastern Europe and Central Asia. But this time around, China could be crossing the dangerous red line by interfering in the lifeline of Russia’s external trade- the Black Sea region and the Bosporus Strait.

Turkey’s populist President Recep Tayyip Erdoğan is looking to build the Istanbul Canal, which will restrict Russia’s ease of access through the Bosporus Strait that connects the Black Sea and the Sea of Marmara. And Erdoğan is looking to rope in China for building the 45-km long Istanbul Canal which will run parallel to the Bosporus Strait. However, Chinese involvement is sure to rile up Moscow, which has already warned others against undermining Russian influence in the region.

Istanbul Canal is no ordinary infrastructure project. The geopolitically ambitious project is estimated to cost around $15 billion, which seems like a tough ask for Turkey’s troubled economy. Therefore, Erdoğan is looking for foreign support, including China’s.

Turkey’s Transportation Minister Adil Karaismailoglu talked to CNN Turk TV about the Istanbul Canal project on Friday. He is reported to have implicitly drawn parallels to China’s Belt and Road Initiative.

There are many reasons why China would be interested in building the Istanbul Canal. Beijing has always been interested in investing in Turkey in general and in Istanbul in particular. Chinese President Xi Jinping’s Belt and Road Initiative ambitions of ensuring connectivity to Europe inevitably pass through Turkey that connects the two continents of Europe and Asia.

In fact, in 2015, a consortium of Chinese state-owned companies acquired a major container terminal in Istanbul for almost $1 billion. In January 2020, another CCP consortium bought 51 per cent of the Yavuz Sultan Selim Bridge connecting Europe and Asia. Ankara and Beijing have also signed a Memorandum of Understanding to align Turkey’s “Middle Corridor Initiative” linking Turkey and Europe with China through a Trans-Caspian, east-west route.

How China wants to reach Europe via Turkey may be a bilateral issue between Ankara and Beijing. But the issue is that with Istanbul Canal, Erdoğan wants to use Turkey’s geopolitical position to control the Black Sea and block Russian access to the Bosporus Strait.

Once Russia loses freedom of access to move through the Bosporus Strait, it will face a major setback in terms of gas exports to other parts of the world. This is how Turkey wants to hurt Russia. China, on its part, is looking to play a part in Turkey’s anti-Russia designs.

Presently, Turkey is bound by the Montreux Convention that gives all Black Sea States including Russia freedom of access into Turkish Straits. By building the Istanbul Canal, Turkey seeks to bypass the provisions of the Montreux Convention. At the same, Erdoğan wants to undermine Moscow in its own backyard by weaponising Russian interests in Crimea.

Beijing thinks it can help Turkey in building the Istanbul Canal and profiteer by controlling the route that connects the Black Sea to the rest of the world. But China would be making a big mistake if it invests in the ambitious project, as Russia won’t sit quietly either.

Moscow has already shown what the Black Sea region means for it. When a UK warship came close to the coast of Crimea, Russia fired warning shots and also threatened to bomb British vessels if they embarked on a misadventure in the region. Moscow’s bigger signal was however directed at Ankara and Washington. Russia wants Turkey and the West to stay away from Crimea and the Black Sea.

If China joins Turkey in challenging Russia, it will get a befitting reply from the Kremlin. However, it is unlikely that Beijing will say no if Turkey seeks help in building the Istanbul Canal.

The Sino-Russian relationship is already fractured due to Chinese involvement in the Russian Far East, the Arctic, Central Asia and theft of Russian defence designs.

Now, by trying to expand its footprint into the Bosporus Strait and the Black Sea, Chinese President Xi Jinping is punching way above his weight. It may thus only be a matter of time before Russia and China find themselves on a collision course all over again.