From being an Islamic Republic, Turkey is heading towards being a Chinese colony 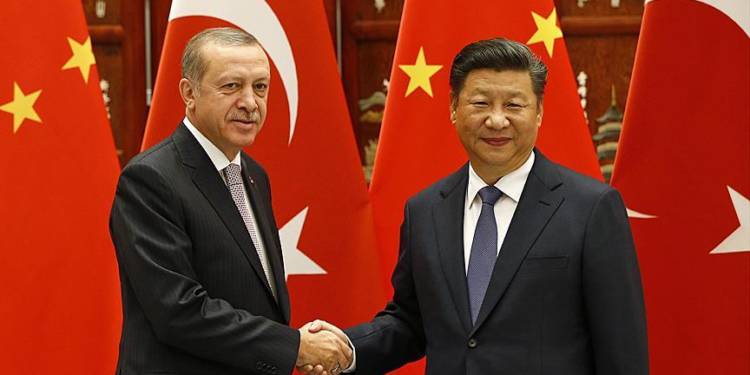 Turkey, under the reign of Recep Tayyip Erdoğan, is working overtime to join the club of North Korea, Pakistan and Nepal to emerge as yet another client state of Communist-ruled China, which is pretty much buying the entire country as a part of its unending appetite for territorial expansionism and neo-colonial control over what prior to Chinese hijacking are a free people. Like Iran, Turkey too is being quite literally bought by China, which is using its state-owned companies to push in money into the nosediving Turkish economy.

While China’s deal with Iran, spread over a span of the next 25 years to attain complete control over Iranian society has been leaked to the press, the Chinese Communist Party has so far kept its Turkish cards close to its chest.

However, the bailing of the Turkish economy by China is so brazenly overt that it does not take an intelligent guess to arrive at the conclusion that Erdoğan is selling Turkey away.

Ankara’s Forex reserves are dwindling, its currency is hitting record lows against the US dollar and the plight of its tourism industry coming to a standstill are all contributing to an easy Chinese walkover in Turkey. To add to Turkey’s woes, the sanctions threat and the COVID-19 pandemic are further obliterating whatever remained of the Turkish economy. Also, Erdoğan’s lacklustre fiscal policies are killing what was once a booming economy.

In every sector of Turkey which is vital to its economy, the Chinese have inexplicably become an inherent feature. Energy, infrastructure, transportation and hence tourism, telecommunications, et al; the Chinese can be seen everywhere. As part of the infrastructure-building initiative, Turkey completed a railroad from Kars into its east, via Tbilisi, Georgia, to Baku, Azerbaijan, on the Caspian Sea, from where the railroad is linked to transportation networks to China. While Turkey gets development done on Chinese expenses, the Chinese enter Europe, West Asia and the Eastern Mediterranean by bailing out Erdoğan.

In 2015, a Chinese consortium bought 65 percent of Turkey’s third-largest container terminal, Kumport, in Istanbul. In January 2020, another CCP consortium bought 51 percent of the Yavuz Sultan Selim Bridge connecting Europe and Asia. Turkey is an enthusiastic participant in Xi Jinping’s flagship Belt and Road Initiative (BRI). China’s Export and Credit Insurance Corp. has committed up to USD 5 billion for Turkey’s Wealth Fund, which will be used for various BRI projects. China is providing $1.7 billion to build the Hunutlu coal-fired power plant on the Mediterranean Sea, which is expected to produce 3 percent of Turkey’s electricity when completed. Ankara is also on the lookout for inking a deal with China’s State Nuclear Power Technology Corp. to build Turkey’s third nuclear power plant.

China and Turkey, since 2016, have signed at least 10 public bilateral agreements, even as the number of backdoor deals signed remains hidden. Having invested USD 3 billion in Turkey between 2016 and 2019 already, China has also committed to double its investments in its newest vassal state by the end of 2021. Interestingly also, China has permitted Turkey to use the Yuan as an acceptable currency for making trade-related payments, even as Turkey’s Lira continues on its path of an unending downward spiral. In June 2019, China’s central bank transferred USD 1 billion — the largest cash inflow under a swap agreement between the two countries’ central banks ever.

Previously, in 2018, the CCP-owned Industrial and Commercial Bank of China provided the Turkish government USD 3.6 billion in loans for energy and transportation projects in the country. Such a buy-out of Turkey, under the garb of largescale investments by China, has not come free of cost for Erdoğan. The prerequisite for Turkey to even exist freely now is for it to toe the Chinese line on all issues, and also grant China unfettered access in and out of the country, while it also acts as a bridge for China between Asia and West Asia/Europe.

China has no friends. It, therefore, substitutes lack of the same by buying countries and turning them into its client states. China has turned Erdoğan into a CCP stooge, who was himself a man until 2009 calling out China’s excesses in its occupied province of Xinjiang on Uyghur Muslims. “The incidents in China are, simply put, a genocide,” Erdogan had emphatically stated back in 2009 when he was Turkey’s Prime Minister. Now, he dares not utter the word ‘Uyghur’, lest China stops all funding and investments into Turkey, rendering the country completely incapacitated to run itself.