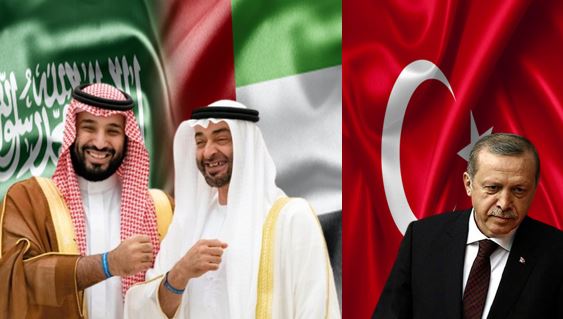 Overpowered by his dreams of establishing a caliphate and resurrecting the past glory of the Ottoman Empire, Turkish President Recep Tayyip Erdoğan had embarked on a perilous journey to challenge the mighty Arabs back in 2019. Turkish intervention in Syria and Libya had already given wings to his ambitions. However, Erdogan’s largish aspirations took a massive toll upon Turkey’s economy. His geopolitical adventurism in Turkey’s neighborhood gave rise to the tensions that jeopardized the business environment in the country. Two years down the line, a hopeless Erdogan is now desperately striving to mend his ties with the Arab world.

However, the response from the Arab world is far from dovish. In response to Erdogan’s pleadings, Saudi Arabia and the UAE are preparing to hold joint military exercises with Egypt and Greece to enhance military cooperation between “friendly and brotherly” countries. The Saudi and Emirati militaries have already arrived in Greece, and the four military powers are preparing to mount military pressure on belligerent Turkey.

Hence, a new Middle Eastern Quad grouping comprising all Turkish rivals is seemingly emerging as a united force to stymie Erdogan’s regional domination goals. The four nations have enhanced their strategic and economic cooperation over the past two years. Turkish belligerence has played a vital role in bringing all of its regional rivals together. In one way or the other, the four countries have successfully thwarted and decimated Erdogan’s ambitions of setting up an Islamic bloc parallel to the Arab-dominated Organisation of Islamic Co-operation (OIC).

Saudi Arabia’s informal trade embargo on Turkey started to show effects in October last year. The month witnessed a whopping 12.1% drop in Turkish exports to the Arab country compared to the previous year. The only other top 20 export market for Turkish goods that month to record a double-digit decline was the United Arab Emirates (UAE), a key ally.

The UAE’s attempts to drive Turkey out of Syria

The UAE also attempted to court the Syrian Assad regime to hammer down Turkish interests in Syria. As per media reports, not only did Crown Prince Mohammed Bin Zayed strive to block the ceasefire deal between Turkey and Russia in March last year, but he also repeatedly requested Syrian President Bashar Al-Assad to break the agreement by relaunching his military offensive in the north-west province of Idlib. The UAE had also offered $3 billion in aid to the Assad regime in return for its support to the Emirati plans of acting against Turkish interests. In January this year, the UAE had also engaged proxies fighting alongside General Haftar of the Libyan National Army to drive out Turkish influence from the region.

Read More: From “Caliphate dreams” to seeking normalization with Arabs, how Erdogan’s fate changed in one year

Greece has also upped the ante against Turkey amid the allegations of militarizing the island of Chios that, Turkey says, violates the Lausanne Peace Treaty.

Last year, Erdogan converted several century-old Hagia Sophia in Istanbul to a full-fledged mosque commencing Friday prayers from day one to assert an Islamic ‘supremacy’ over other religions. The move was resented by Christians worldwide, and Greece was more than vocal in its condemnation. Since last year’s tensions with Turkey over Hagia Sophia’s invasion, Greece has courted like-minded countries like Israel, India, Saudi Arabia and the UAE to pile up diplomatic pressure on Turkey.

Egypt’s anti-Turkey maneuvers in the Mediterranean Sea and Libya

On the other hand, the rivalry between Egypt and Turkey has also spelled innumerable troubles for the Turkish regime. Cairo and Ankara have two bottleneck issues in their partnership—The Mediterranean Sea and Libya. Egypt has continuously sided with General Khalifa Haftar of the LNA while it has worked with Israel and Arab countries to corner Turkey in the Mediterranean Sea.

The Middle Eastern Quad comprising Egypt, the UAE, Saudi Arabia and Greece; is set to get strengthened in the times to come. Erdogan’s repeated attempts to tame the Arab world’s rage have so far ended in vain.

Turkey’s attempts to bury the hatchet with Arab world

Turkey’s first diplomatic high-level talks with Egypt began this month after a break of eight years. In the first statement after the meetings, the Foreign Ministry said Turkey and Egypt had agreed to continue political consultation talks and the common desire to make progress in the areas discussed. Earlier this year, Turkey said that it had resumed diplomatic contact with Egypt and wanted to improve cooperation after years of tensions that began with the disruption of relations in 2013. Moreover, Erdogan is also keen to mend his ties with the Arab leaders. Earlier this month, President Recep Tayyip Erdoğan held a phone call with UAE Crown Prince Mohammed Bin Zayed Al Nahyan for the first time after a year.

However, such premature signs of a thaw in the Arab-Turkish ties should be hardly motivating for Ankara. Ankara must get its hands off the proxies battling the Arab world’s interests in Libya and Syria to bury the hatchet with the Arab world. Nonetheless, the diplomatic and military prowess of the four-nation coalition is more than enough to tame the razing caliphate inside Erdogan.

Biden is flying Haitian migrants to New York, Florida and other parts of the US, instead of deporting them