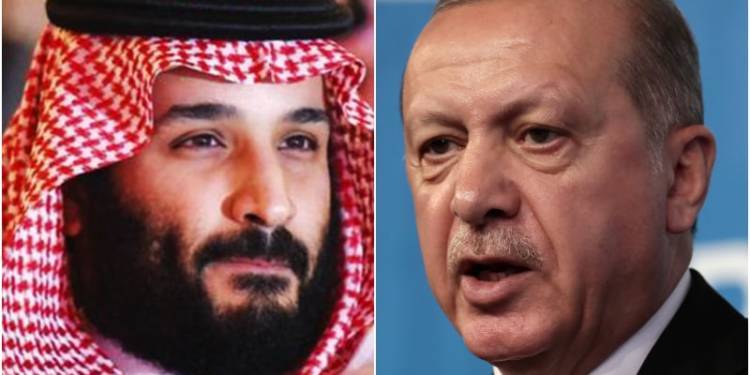 Turkey President Erdogan in his pursuit to become the de facto leader of the Islamic world has managed to antagonise the Arab world with Turkey all set to pay for Erdogan’s adventure and misplaced priorities. The Arab world led by the Saudi Kingdom is all set to boycott Turkey which will have serious implications for its already rapidly declining economy.

Recep Tayyip Erdogan who is hell-bent on turning Turkey from a democratic and liberal state to a theocratic country continues to antagonise the Arab world through his antics. Recently, Erdogan claimed that some countries in the Arabian Gulf were targeting Turkey and pursuing policies that destabilized the region.

Addressing Turkey’s General Assembly, Erdogan said, “It should not be forgotten that the countries in question did not exist yesterday, and probably will not exist tomorrow; however, we will continue to keep our flag flying in this region forever, with the permission of Allah.”

It is safe to say that the comments weren’t well-received by the Arab world as Saudi Arabia’s head of Chamber of Commerce has openly called for a boycott of “everything Turkish” including imports, investment, and tourism, stating that it is “the responsibility of every Saudi” to boycott Turkey.

In fact, Saudi Arabia has been putting pressure on local businesses not to trade with Turkey and its industries with various instances of the Kingdom detaining trucks carrying produce from Turkey reported which further boosts Saudi’s unofficial boycott of Turkey.

Saudi Arabia through its unofficial boycott is determined to pretty much prevent anything Turkish from entering the Kingdom. Saudi Arabia has also cancelled the employment contracts of high-ranking Turkish nationals working within the Kingdom. It is pertinent to note that Saudi cannot officially boycott Turkey without inviting sanctions from the World Trade Organisation. In light of the unofficial boycott, Turkey is considering knocking the doors of the WTO and is seeking compensation through a formal dispute.

The absolute distaste for Turkey starts from the upper echelons of the Saudi Kingdom be it the case of Prince Faisal Bin Bandar Bin Abdulaziz refusing to drink Turkish coffee offered to him last year or Prince Abdullah Bin Sultan Al Saud calling for a boycott of Turkey and its produce until “Ankara reviews its policies with the Kingdom.”

Egypt has also been at forefront of uniting the Arab world against Turkey and ensure an efficient Arab boycott during the September meeting of the Arab League.

In their joint statement, Arab League foreign ministers denounced Turkey’s “interference in Arab affairs,” including its military actions in Syria, Libya and Iraq, and urged the country  to “stop provocations that could erode building trust and threaten the region’s security and stability.”

Even before the pandemic hit the world, Turkey was facing a currency crisis that began in 2018 which subsequently led to a sharp recession. In the current fiscal year, the Turkish lira has emerged as one of the world’s worst-performing currencies as its down by 22 per cent with the situation further deteriorating by rapidly depleting foreign exchange reserves.

In such a precarious situation, the Turkish economy can least afford a collective boycott by the Arab world. Saudi’s unofficial boycott has begun hurting Turkey’s fragile economy as in the first seven months of the year, Turkish exports stood at some $90 billion, decreasing 13.7% from the same period last year.

The biggest bone of contention between the Arab world and Turkey is the fact that how Erdogan albeit failingly, attempted to forge a different grouping with Pakistan and Malaysia that would undermine the authority of the Organisation of Islamic Countries in his quest to dethrone Saudi from being the de facto leader of the Islamic world.

The fact that Erdogan’s Foreign Policy is exactly opposite to the Arab world hasn’t helped either. While Turkey supports the opposition in Syria and the UN-backed government in Libya, Saudi Arabia and its regional allies have warmer relations with the Assad regime in Syria and backs renegade Field Marshal Khalifa Haftar in Libya.

Turkey’s stance on major geopolitical issues is also perceived as a threat to peace in the region, and perhaps that’s why the Arabs are hitting back and have called for an efficient boycott of everything Turkish.

China put all its might at snatching French territory New Caledonia, but France has just struck a deadly blow