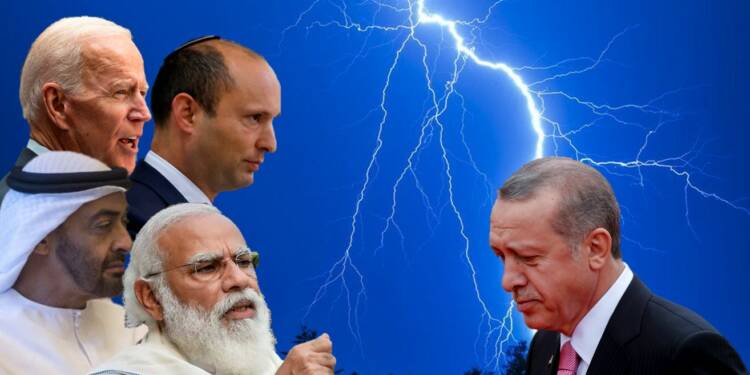 India along with UAE and Israel have been in their own sort working to expand their zones of cooperation in the larger Middle East and North Africa (MENA) and Central Asian region. In the latest development today, at (10:15 pm IST), the foreign ministers of India, Israel, the United Arab Emirates, and the United States will hold a virtual meeting to improve collaboration and coordination. Dr S Jaishankar, Indian External Affairs Minister, is in Israel for a bilateral meeting with his counterpart, Yair Lipid, as well as a meeting with Prime Minister Naftali Bennett.

US Secretary of State Antony Blinken and UAE Foreign Minister Sheikh Abdullah bin Zayed Al Nahyan will join them virtually in a meeting with Indian External Affairs Minister Jaishankar and Israeli Foreign Minister Yair Lapid from West Jerusalem. This should come as a nightmare to Turkey which has for the longest time been a major disrupter in the region. This meeting comes as a crucial part of the Israeli government’s efforts to build strong international relations that will strengthen its position in the region and around the world, as well as contribute to a strong and smart push for the peace process between Tel Aviv and its neighbours, according to a statement from the office of Israeli Foreign Minister Yair Lapid.

A major step towards the betterment of the region

The 2020 Abraham Accords, signed in August 2020 by the United States, the United Arab Emirates, and Israel, have aided the formation of the new “Quad.” In September 2020, Israel, and the United Arab Emirates normalised relations, altering the Middle East’s geopolitical landscape. While the agreement to normalise Israeli-UAE relations helped bring diplomatic recognition to Israel and more economic opportunities to the UAE (including, if media reports are to be believed, a promise from the US to allow Abu Dhabi to shop for advanced American military hardware), the pact is also held together by their common adversarial stance toward Iran.

Prior to this supposed Quad summit, a trilateral meeting between the UAE, Israel, and the United States was held in Washington last week, with the foreign ministers focusing on the problem of “peaceful coexistence.” “The outcomes of HH Sheikh @ABZayed’s meeting with the Ministers of Foreign Affairs of the #US and #Israel were remarkable and important, including the announcement of the two working groups “Peaceful Coexistence” and “Water and Energy” between the three countries,” UAE envoy Mohamed Al Khaja tweeted.

The outcomes of the meeting of HH Sheikh @ABZayed with the Ministers of Foreign Affairs of the #US and #Israel, were remarkable and important, including the announcement of the two working groups "Peaceful Coexistence" and "Water and Energy" between the three countries. pic.twitter.com/bvOFFQnXwP

On the other hand, Israel’s foreign minister tweeted, “At the center of my visit here is the concern about Iran’s race to a nuclear capability. Iran is becoming a nuclear threshold country. Every day that passes, every delay in the negotiations brings Iran closer to a nuclear bomb.”

The Abraham Accord between Israel and the United Arab Emirates (UAE) is opening up a new era in the Middle East. It is going to revolutionise energy trade in the region by reinvigorating the Trans-Israel pipeline which will assure smooth trade of Gulf oil into the Mediterranean and further North into European markets.

The Trans-Israel pipeline connects Eilat, located on the Gulf of Aqaba at the northern tip of the Red Sea to Ashkelon, an Israeli port city on the Eastern Mediterranean coast. The 254 km-long pipeline passes through the Negev Desert region and effectively bypasses the Suez Canal. Now, the Trans-Israel pipeline project seems bound to resurrect as a great product of the Abraham Accord. Emirati and Israeli energy firms are pushing strongly to make this strategic asset a new symbol of cooperation and kickstart a new export route from the Gulf to Europe.

India, INSTC and the cutting off Turkey’s eastern wings

Turkey has never had a friendly relationship with Armenia. Despite their proximity, Armenia and Turkey have always been embroiled in a diplomatic spat due to their shared history. Armenia is mostly a Christian country, whereas Turkey is primarily a Muslim one. Millions of Christians were killed and butchered in Armenia during the Ottoman Empire’s peak. If the INSTC includes the Chabahar port and Armenian routes, it will be a major setback for Turkey. India opted to confront the Erdogan government after becoming concerned about the growing Turkey-Pakistan nexus and Turkey’s backing for the Kashmir problem.

India has been forging a strategic cooperative partnership with Turkey’s neighbours, such as Armenia, Cyprus, and Greece, for the past few years. India has previously received backing from Greece and Cyprus, while India’s position in the region is being strengthened by Armenia. And now with the countries namely, India, Israel, UAE, and the US come together, the subtle yet effective isolation of Turkey will be easily possible.

While the INSTC (International North-South Transport Corridor) cuts the utility for the countries in the East of Turkey, the consolidation of the Abraham Accord allies has cut the utility of Turkey for the supply of Oil & Gas to Europe. It is coming at a time when Russia is also pushing on Turkey, and this could be the added reason why the new quad in the middle east is a massive jolt to Turkey.