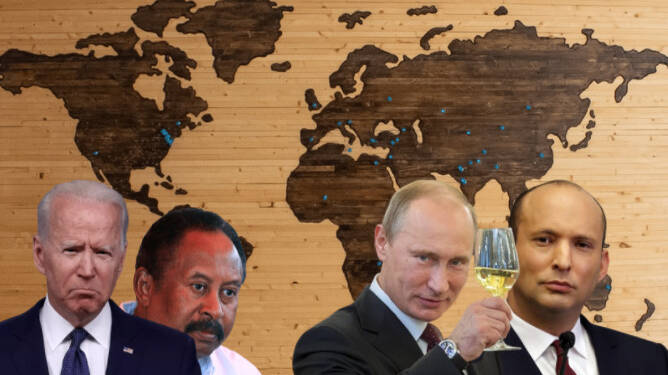 Sudan has gone through yet another sweeping political change. And everyone including Russia and Israel seems to be happy about it. If there is any loser in the entire bargain, it is the United States President Joe Biden.

On Monday, the Sudanese military detained Prime Minister Abdalla Hamdok and other members of the transitional government in the African country. The military has declared a state of emergency, which means the transitional government has been replaced by a military regime. The coup has therefore turned out to be a boon for Russia and Israel, but it further ostracized the US in the African Continent.

Russian footprints in the Sudanese coup:

Lt. Gen. Abdel Fattah al-Burhan, who led the coup by the Sudanese military against the transitional government, has announced the introduction of a state of emergency in Sudan. He has also dissolved the African country’s so-called Transitional Sovereign Council and the government.

The events in Sudan have been reportedly welcomed with cautious optimism in Moscow. Russian officials haven’t recognised the regime change in Sudan till now, but the reaction of Russian officials suggests that the Sudanese military has Moscow’s backing.

First Deputy Permanent Representative of Russia to the UN Dmitry Polyanskiy said, “It’s hard to say if this is a coup or not. The term ‘coup’ has a specific definition. There are situations like [that of Sudan] in many parts of the world that are not called a coup. This is sometimes called a change of power. … It is up to the Sudanese people to decide whether it is a coup or not.”

Justifying efforts by the Sudanese military to repress the ongoing protests in the country, the Russian officials added, “As far as I can see, there are not only peaceful protests but [also] violent protests.”

A month later, the Sudanese military agreed to the construction of a Russian military base in Sudan in 2020.

However, the transitional government in Sudan was developing cold feet on the question of developing a Russian naval base. The civilian governments were putting forward new conditions, which enraged Moscow and led Russian officials to believe that Sudan was acting under the influence of Western powers.

The coup in Sudan will now help Russia facilitate the construction of its military base in the war-torn country.

Why is the US fuming?

The United States is particularly unhappy about the coup in Sudan. The US Department of State has stated, “The United States strongly condemns the actions of the Sudanese military forces. We firmly reject the dissolution of the civilian-led transitional government and its associated institutions and call for their immediate restoration. The arrest of Prime Minister Hamdok and other civilian leaders is unacceptable. The military forces must ensure their safety and release them immediately. These actions have the potential to derail the country’s transition to democracy and are a betrayal of Sudan’s peaceful revolution.”

Before the coup, Sudan was getting closer to the United States of America. Only last year, it had normalised its relations with the Jewish nation of Israel by signing a Donald Trump-mediated Abraham Accord.

In return, the US had promised economic aid worth 300 million US dollars and 3 billion US dollars in debt relief and investment to Sudan, apart from removing the African country from the US terror list.

To many, the Sudan-Israel Abraham Accord signed last year meant a diplomatic victory for the US. Washington, D.C. has had a long history of conflict with Sudan, which was put on the US terror list in 1993, partly due to the African country’s alleged ties with terrorists like Osama bin Laden.

Two years later, the then US President Bill Clinton had imposed punitive sanctions on Khartoum and in 1998, Clinton had ordered a missile strike on the Al-Shifa pharmaceutical plant in Khartoum, Sudan as a retaliation against the bombing of US embassies in Kenya and Tanzania by Osama bin Laden loyalists.

Bill Clinton administration had then argued that the Al-Shifa, the pharmaceutical plant was targeted because it was used as a terror base. However, later on, it was proved that the Khartoum-based pharma plant had no terror ties.

Finally, the Arab Spring reached Sudan in 2011, like many other countries in the Middle East and North Africa (MENA) region. In 2011 itself, South Sudan seceded from Sudan and took away much of its oil reserves. Later in 2019, the longtime US foe, former Sudanese President Omar al-Bashir was overthrown by the military and a transitional government was put in place to lead the country towards democracy.

Toppling Omar and the establishment of a transitional government in Khartoum was a victory for the United States. This is why the US is fuming due to the exit of Omar al-Bashir.

Israel is not on the same page as the United States of America:

Israel is the biggest non-Muslim ally of the United States in the MENA region. Yet, Israel hasn’t opposed the coup, while the US is crying foul.

The fact remains that Israel considers the Sudanese military a great friend. During the run-up to normalisation of relations between Israel and Sudan, the civilian government led by Abdalla Hamdok was reluctant to embrace the Jewish nation due to adverse public opinion while the Sudanese military seemed favourable.

The Israeli security establishment, therefore, feels that even though the Sudanese military is
a faithful ally, it is not in the good books of the United States.

Israel’s reaction is thus an indication of how the Jewish nation is ready to cooperate with Russia. Israel’s relationship with Moscow has always been friendly excepting a brief period of military conflict in the late 1960s at the peak of the Cold War. Despite being a US ally, Israel is cooperating with Russia in the MENA region.

Sudan is a poor African country located in the Sahel region that is characterised by Islamist extremism and civil conflict between Muslim and Christian communities. Located in between the Sahara desert and tropical Africa, the Sahel region has a semi-arid topography and unpredictable weather vulnerable to frequent droughts. Sudan is no exception.

Yet, Sudan is becoming a hub of global power competition. As the recent coup has shown, powers like Russia, the US and China are deeply involved in Sudan. Even though the oil-rich Sudanese region went to South Sudan, there is still some availability of oil, which makes the global powers very interested.

Much of the Russian and Chinese interest in Sudan is related to Darfur, a region located in Western Sudan which is presently going through ‘the world’s worst humanitarian crisis’.

Sudan’s Darfur has witnessed thousands of deaths and displacement of over 2 million people due to environmental degradation and ethnic conflicts. However, Darfur is also believed to have lots of oil- an estimated five to fifteen billion barrels, waiting to be explored.

Chinese State-owned oil companies have been in talks with Sudan to help it extract oil from the Darfur region. Russian private military contractors too were reported to be operating in the Darfur region in 2018.

Therefore, by backing a regime change in Sudan, Russia can also out-compete China when it comes to extracting oil from Sudan’s Darfur region.

Sudan is a poor nation ravaged by conflict and wars. However, all global powers including Russia, China, Israel and the US want to shore up their influence in Khartoum for individual reasons. However, it is Moscow and Jerusalem who presently seem to be succeeding in their plans.