A Bennett-Putin meeting is happening, and it means curtains for the US in Middle East 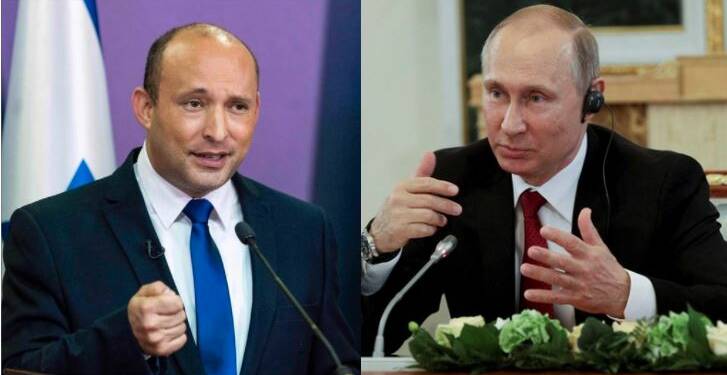 Russia is warming up to Israel. Only recently, as reported by TFI, President Vladimir Putin suggested that Israel offered a good model which has a lot to offer to the Russian Federation. The Russian president suggested that Slavic people should take a cue from Israelis and unite as one people despite different ethnicities, origins, and maternal languages. The Russian President was speaking in the context of his goal to reunify the former Soviet Union. Now, Israeli Prime Minister Naftali Bennett and Vladimir Putin have agreed to meet soon to add further steam to ties between their countries.

Israel’s new prime minister spoke for the first time with Putin on Monday and the two have agreed to meet soon. Bennett’s office said he thanked Vladimir Putin for Russia’s contribution to stability in the region and that the two spoke of the bridge between the two countries represented by Russian immigrants to Israel. Over 1 million Jews from the former Soviet Union have moved to Israel over the past three decades.

The timing of Bennett and Putin agreeing to meet is crucial. Israel stands at crossroads, not just due to the Democrats in the USA growing hostile towards it and Joe Biden somehow trying to survive his party’s onslaught for his pro-Jerusalem foreign policy, but also due to China’s increasing anti-Israel moves. For Israel, relying solely on the United States has become a tough choice, given how the Israel-Palestine conflict is fast dividing America’s polity – which can result in the U.S. reversing its support for Tel Aviv if the Democrats pressure Biden into doing so.

Russia is increasingly realising the importance of befriending Israel. With the U.S. beginning to retreat from the Middle East, Russia is looking to fill the vacuum which will be left behind. Already, Russia is respected by the Arab countries. Moscow is looking to take on Turkey and is also engaged in a powerplay with China over who will exercise more influence over Iran. All of this makes Israel a natural choice for Russia. Israel’s ties with the Arab world are fast improving, while it is also one of the biggest Iran and Turkey hawks that there are.

In the event that China is able to subjugate Iran, Russia would want to play a significant role in the Arab World. And everyone sees Israel as a crucial part of the global effort to tame Iran, Turkey and the Muslim Brotherhood at large. Putin would also be interested to know what the new government of Israel, led currently by Naftali Bennett, has to bring to the bilateral table.

China is annoying and even infuriating Israel to an extent. During the recent armed conflict between Israel and Hamas, China proved unusually vocal in its support for the Palestinians, harshly criticising Israel’s airstrikes in Gaza, drafting United Nations Security Council’s statements condemning Israel’s actions – while also giving a blatant pass to Hamas. China also slammed the U.S. for its steadfast support for Israel. China, being the foolish nation ruled by a despot that it is, was convinced that Iran and Hamas could register a victory over Israel during the war in May.

Imagine the humiliation China faced when it realised that Israel was the unquestionable victor of the recent conflict in Gaza. In fact, China even resorted to pro-Palestine and anti-Zionist propaganda via state media channels – thus, making its stand on the hostilities amply clear.

Israel has now decided to not hold back either. Israel was among the 41 countries at the UN Human Rights Council on Tuesday that supported a declaration calling on China to allow “immediate, meaningful and unfettered access” so that independent observers can visit its western Xinjiang region, where Beijing is accused of a brutal crackdown on Muslim Uyghurs and other minorities. Anyhow, Israel’s realisation of China’s true character is quite significant. And it can really harm Beijing’s interests in the region.

Israel has been warming up to Russia since before the new government led by Prime Minister Naftali Bennett took charge. Earlier, Benjamin Netanyahu had hinted that his government had no qualms in stepping up its ties with Russia and supporting Moscow’s role in the Middle East. The new Israeli government seems to be following Netanyahu’s cue on this count.

A paranoid Jinping goes after Didi Global after its $4.3 billion Nasdaq IPO