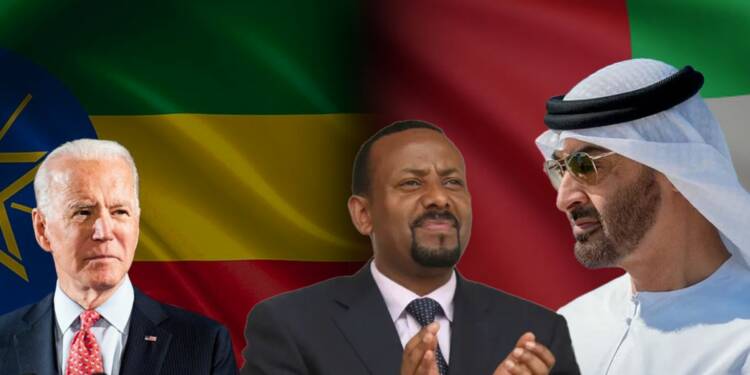 US President Joe Biden has lost the plot in the Horn of Africa. In fact, even key US allies in the Middle East don’t seem to agree with Biden’s outrageous and interventionist policies.  Take the case of the UAE helping Ethiopia protect its sovereignty. The East African country’s northernmost region of Tigray has been facing insurgency since November last year. Ethiopia blames the region’s ruling Tigray People’s Liberation Front (TPLF) for attacking Ethiopian forces.

The US, which wants to expand its influence in the landlocked country, is allegedly supporting the TPLF for the last 20 years. The Biden administration has further hinted at a direct intervention accusing Ethiopia of human rights abuses. However, the UAE, an American ally, is now supporting the Ethiopian government in its fight against the TPLF.

Ethiopia is a poor African nation with a small GDP of merely $91.514 billion. However, despite its small economy, Ethiopia has ambitions and the potential to grow– after all, it controls major sources of the Nile river! Therefore all major powers including Russia, China and the US are interested in Ethiopia. So, what makes Ethiopia special?

Well, Ethiopia is strategically located in the Horn of Africa, which is a gateway to major world shipping flows via the Red Sea and the Suez Canal to the Mediterranean. Ethiopia itself is located close to war-torn Yemen. Therefore, Arab nations and Iran want to shore up their influence in Ethiopia in order to gain an advantage in the conflict-ridden nation. Finally, the landlocked nation of Ethiopia borders Djibouti, where many superpowers have established military bases. Therefore, higher influence in Ethiopia helps maintain better control in Djibouti and the maritime area around it, and it could be a decisive factor in the Yemen war.

The Biden administration wants influence over Ethiopia, but their style is to threaten Addis Ababa of breaking up the East African country, and get them to kneel, which is unacceptable for the Ethiopian people. Ethiopia however has emerged as an aspiring and sovereign African power in recent years, and its people even waved the Russian flag in protests against the US. Now, the UAE has entered the fray and renewed efforts to back Ethiopia, openly defying Biden’s agenda.

Interestingly, the UAE and Ethiopia are on friendly terms. Despite the US intervention in Ethiopia, it makes sense for the UAE to keep Ethiopia in good humour given that the East African nation is located in the Horn of Africa. It is not very far away from war-torn Yemen where the UAE and its allies have been involved in an armed conflict with the Iran-backed Houthi rebels.

The US may have gone as far as imposing sanctions on Ethiopia this year. However, the UAE is allegedly supporting Ethiopia in its fight against the TPLF forces for almost a year now. In November 2020, Getachew K Reda, Executive Committee member, TPLF, tweeted, “Abiy Ahmed Ali (Ethiopia’s PM) is now enlisting the support of #UAE drones based in Assab in his devastating war against the people of #Tigray. In the meantime, Tigray Defense Forces have targetted facilities in Eritrea including the Asmara airport that are being used to stage attacks on Tigray.” So the TPLF is at war with the Ethiopian Army and it is accusing the UAE of supporting it.

@AbiyAhmedAli is now enlisting the support of #UAE drones based in Assab in his devastating war against the people of #Tigray. In the meantime, Tigray Defense Forces have targetted facilities in Eritrea including the Asmara airport that are being used to stage attacks on Tigray.

As the US threatens to add more sanctions on Ethiopia, the UAE is admittedly sending tons of medical and other aid supplies to Ethiopia. Mohamed Salem Al Rashedi, the UAE Ambassador to Ethiopia, said, “The UAE has a strong relationship with Ethiopia, and this assistance is part of the directives of the UAE’s wise leadership to provide humanitarian and development assistance to brotherly and friendly peoples.”

However, things may be going even further now. The Ethiopian National Defence Force (ENDF) is presently on a shopping spree. It needs new weapon systems to defeat the rapidly advancing TPLF-backed insurgents.

Ethiopia is looking at Iran and the UAE for acquiring new weapons and it is the UAE that seems to be winning the race.

In the past 53 days or so, at least 51 suspicious cargo flights reportedly reached Ethiopia. Most of these cargo flights landed at the Harar Meda airbase in Ethiopia. 45 of those cargo flights originated in the UAE while only six came from the Shi’ite nation of Iran. The UAE hasn’t revealed what the cargo flights carry, but it is believed that they are being used to transport military equipment to Ethiopia.

The UAE reportedly uses a number of front companies for the delivery of weapons to a country in which it is not officially involved. This is how the Gulf nation is also known to support the Khalifa Haftar regime in Libya against the Turkey-backed regime.

The frequent Emirati cargo flights to Ethiopia make it clear that the United Arab Emirates is not abandoning Ethiopia, even though the US is pushing to solve the conflict through political means and give unnecessary leverage to the militant group TPLF.

Meanwhile, the UAE seems to be further assuring Ethiopia about its support. Crown Prince of Abu Dhabi and Deputy Supreme Commander of the UAE Armed Forces, Sheikh Mohamed bin Zayed Al Nahyan, congratulated Ethiopia’s Prime Minister Abiy Ahmed, who got re-elected to lead his country for another five-year term.

During his phone call with Ahmed, Al Nahyan discussed ways of further developing cooperation and friendship between the UAE and Ethiopia. Al Nahyan’s gesture of congratulating Ahmed has geopolitical ramifications. The UAE is suggesting that in the ongoing Tigray war, it has Ethiopia’s back. The UAE is upholding its alliance with Ethiopia despite facing a great deal of pressure from the Biden administration, which has also suspended an F-35 fighter jet sale to Abu Dhabi.