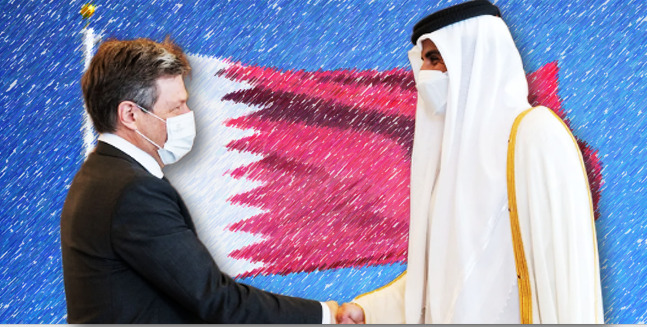 The Western world and Europe, in particular, are embroiled in an energy crisis. It has rubbed Russia the wrong way. So, gas supplies from Russia stand at the risk of getting snapped if tensions escalate further. Meanwhile, the UAE and Saudi Arabia have shot down all requests for hiking oil output.

So, Germany came up with a new plan aimed at avoiding an imminent energy crisis. Well, Berlin plans to dive into blood-soaked Qatari oil.

A German spokesperson said, “The companies that have come to Qatar with (Habeck) will now enter into contract negotiations with the Qatari side.”

Qatar has said that it agreed with Berlin that “their respective commercial entities would re-engage and progress discussions on long term LNG supplies”.

So, Germany is all set to import Qatari gas. It is being said that the move is aimed at reducing German dependence on Russian gas. Anti-Russia activists in the Western world will hail it as a victory for global peace and security.

Make no mistake, Qatar has some of the most abusive laws that perpetuate human rights violations. Women in the country aren’t allowed to marry without the consent of a male guardian, labor laws are extremely weak, and traveling by both married and unmarried women is severely restricted.

Finally, the citizenship laws in the country are extremely arbitrary. It stripped the Ghufran clan families of their citizenship in 1996, depriving them of basic human rights. They cannot travel freely, own property, get a driver’s license, open a bank account, or access basic services. In fact, they are at perpetual risk of being detained arbitrarily. Even today, the Ghufran clan remains largely Stateless. Qatar doesn’t take any responsibility for them.

On top of it, Qatar also faces allegations of sponsoring and funding extremist groups like the Muslim Brotherhood and the Hamas movement. Doha was asked by other Arab countries to act against terrorism but it seems that Qatar couldn’t care less.

How the West is emboldened Qatar?

What is the role of the world police in Qatar though? Well, the US recently rewarded Qatar with non-NATO ally status. The reason cited was Qatari assistance during the US withdrawal from war-torn Afghanistan last year.

And now, Germany is also going to reward Qatar with a gas contract. The West keeps rewarding Qatar despite its terrible human rights track record.

The West says that it wants to save the world from dictators and violence. But how will making Qatar even richer and purchasing its natural gas make the world a better place? Out of its desperation to punish Russia, the West is thus embracing one of the world’s most tyrannical and brutal regimes.