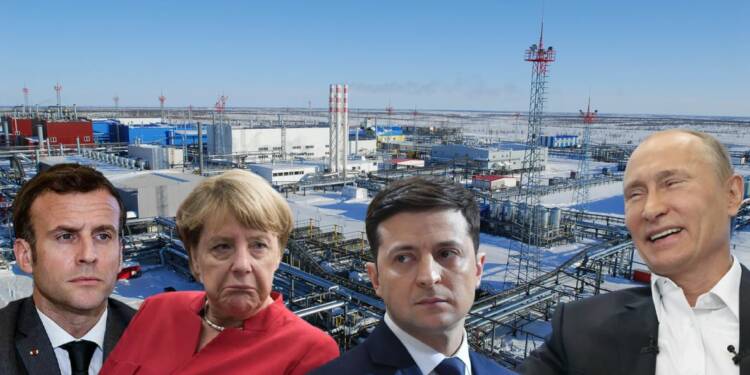 Berlin and Paris condemn Kyiv for attacks against Russia:

France condemned the attacks, saying that the move violated the framework of “Minsk agreements”, accusing Kyiv of intensifying the conflict. A spokesman for the French foreign ministry stressed that the attack contradicts the procedures for supporting the ceasefire regime that entered into force in late July 2020.

Similarly, Berlin hardly betrayed its true emotions, stressing that the two sides to the conflict in Southeastern Ukraine are not authorized to use this type of weapon.

Given the shared hostilities between NATO and Kremlin, Ukraine’s aggression against Russia using NATO-ally made weapons should not have raised red flags in Paris or Berlin. Also, NATO countries have sporadically expressed their support for Ukraine’s sovereignty against Russian provocative assertions. But this time, NATO allies Germany and France conspicuously held their horses back.

That becomes more astonishing when Russia is believed to have ramped up fortifications on its borders with Ukraine. Russia has accused Ukraine of cherishing ambitions of retaking control over the Russian-controlled territories of the Donbas region by force and now has mobilized its own troops on the border.

“The point is: It is not a drill. It doesn’t appear to be a training exercise. Something is happening. What is it?” Michael Kofman, director of the Russia studies program at the Virginia-based nonprofit analysis group CNA, was quoted as saying by Washington Post.

Kofman suggests that Russia’s 1st Guards Tank Army, an elite unit based outside Moscow, could be moving personnel and materiel towards Ukraine. A Washington Post report estimates the number of Russian troops stationed at the Russia-Ukraine border at 80,000 to 90,000, excluding tens of thousands stationed in Crimea.

Kofman also reveals that Russia’s 41st Combined Arms Army did not return to Siberia after the conclusion of the Zapad 2021 exercises; instead, it joined in the other forces already stationed at the border.

Waning support for Ukraine in the EU:

The development is indeed threatening for Kyiv, which is now expecting NATO to come to its defense. Last month, US secretary of defence Lloyd Austin had visited the country accusing Russia of being the biggest obstacle in the way towards peace. The inclusion of Ukraine into the NATO framework has always remained on the table, an unfulfilled promise perceived as the “red line” by Moscow over the Ukraine issue.

The United States has provided Ukraine with Javelin antitank weaponry, along with entertaining some joint military exercises with Ukrainian defence forces. However, the response from the European nations has remained ambivalent, with some fearing an untimely and unnecessary clash with Moscow over Ukraine.

So, France and Germany have now clearly indicated that Ukraine is no longer their priority. Instead, they have their energy crisis as today’s topmost priority, with Russia having the key to the burgeoning crisis.

The current energy crisis in Europe has redefined Moscow’s strategic role in Europe’s vast gas market. Russia has cunningly demonstrated its ability to bring the entire continent on its knees as it pleases.

Today, the EU is staring at Russia with eyes filled with hope that it would supply it with enough gas to keep its wheel moving. Russia also looks well prepared to use this opportunity to fulfil its own geopolitical ambitions. For instance, Russia is now pressuring Germany to approve Nord 2 stream pipeline project that would help the EU stave off its energy crisis.

Russia pushing its own ambitions in the face of the energy crisis:

Also read: Moscow controls Berlin. And Paris. And Rome. And pretty much all of Europe

As the Nord Stream 2 gas pipeline project still awaits approval from Germany, Russian gas exports to Europe solely rely on the gas infrastructure developed by Ukraine. Not just that, Ukraine also gets to earn around 1 billion Euros per year in transit costs for logistic support.

But as soon as the Nord Stream 2 gas project gets online, Ukraine will lose this tremendous leverage over Moscow, which could even pave way for Kremlin to launch an all-out invasion of Ukraine, as some experts fear.

All in all, the EU’s current energy crisis effectively presents an existential threat for Ukraine. The EU’s over-reliance on Russia has severely hampered its ability to defend Ukraine in any event of war. So even when Russia has started mobilizing its forces on the Russia-Ukraine border of late, Germany and France are hardly showing any sympathy for Kyiv.