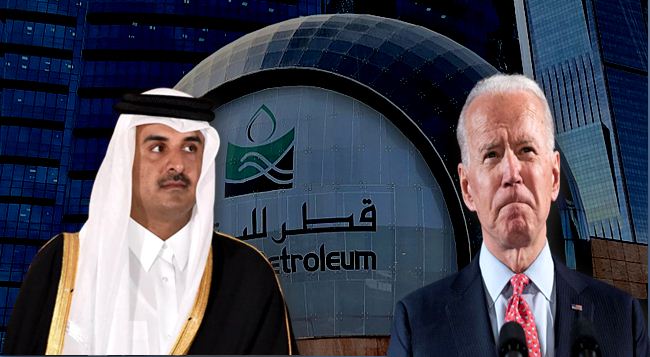 Since the start of the border crisis between Ukraine and Russia, Biden has been continuously pushing the delicate situation towards a full-fledged war between the two countries. He is sending troops to Europe and supplying the EU countries with advanced military weapons. He is also continuously poking Russia with the threats of adding Ukraine into NATO. Recently, the President of Ukraine, Volodymyr Zelensky also pointed out Biden for his instigative and warmongering statements regarding the situation.

Biden’s statements and his administration’s conduct prove that he hankers for a war in the region. That would be perfect for US military-industrial complex to sell its weapons and generate tremendous profits from the war. However, the biggest obstacle for Biden’s plan is the dependency of Europe on Russian gas supplies. This is the single biggest reason why NATO members in Europe are hesitating from challenging Russia. They fear a severe energy crisis if Russia blocks the gas supplies to Europe.

It would be impossible for Biden to fight the war without the support of NATO allies in Europe. That’s why Biden decided to ask Qatar to increase its gas supplies to Europe, as he wanted to compensate for the Russian gas blockade with the Qatari one. This would disseminate the only threat that is stopping the European countries from openly joining Biden for his war in Ukraine.

What do Qatari experts say?

Though Biden wants Qatar to increase its gas supplies to Europe, the larger perspective and narrative among the trade and commodities experts in Qatar is that it is unlikely that Qatar could unilaterally increase supplies of liquefied natural gas to Europe, because much of its output is committed to long-term contracts concentrated in Asia.

According to Laura Page, a senior LNG analyst at Kpler (a data and analytics group) said, “Qatar accounts for about one-fifth of global LNG supplies, but the Gulf country already is producing at full capacity. Around 90 to 95 per cent of supply from Qatar’s largest gas processing and export facility, Ras Laffan, is also locked into long-term point-to-point contracts with buyers in Asia”. She added, “Asia is in its peak demand season at the moment, so the near term, I don’t see large swaths of Qatari supply being rerouted to Europe”.

Explaining the matter, Anne Katrin Brevik, director of LNG research at Refinitiv, said, “While Qatar could reroute some free capacity to Europe, this would be far from enough to cover a total disruption in Russian flows. Qatar, which sells most of their gas under long-term contracts, is legally obliged to deliver”. She added, “It would severely ruin their reputation — and be expensive — if they walked away from the delivery obligations. They will need the consent from holders of long-term contracts to divert the LNG”.

Since Biden asked Qatar to increase the gas exports to Europe, Qatar has many times responded by saying that it cannot solve Europe’s gas needs alone. Last week, the Qatari minister of state for energy, Saad al-Kaabi, said in an interview that Qatar has not approached its Asian customers over diverting LNG to Europe.

The State-owned Qatar Energy has signed several long-term commitments and contracts with Asian buyers (India, China, South Korea, and Taiwan) during the past two years, which have expanded the proportion of its exports sent to the region. Asian buyers have also been willing to pay higher spot prices for uncommitted exports from Qatar.

As a result, Qatar‘s LNG exports to Europe fell 27% last year from 2020. Asian demand hit seasonal peaks in January 2021 and last month, due to winter heating needs that come on top of the easing of COVID lockdown restrictions.

Read More: After being betrayed, an infuriated Zelensky rips into Joe Biden

Why is Qatar rejecting Biden’s demand?

Europe, which is in the race to shift to green and renewable energy, seems to be just facing a temporary energy crisis. Most of the European countries and the whole of the EU are committed to the green and renewable energy transition. That makes Qatar just a temporary supplier to Europe. If Qatar decides to increase its gas exports to Europe by compromising its prior and long term commitments and contracts with the Asian markets, it would just be a temporary supply and not a long term deal. In that case, Qatar will not just damage its relations with Asian customers but will also gift a long term economic loss to the country.

Qatar, a very shrewd player when it comes to geopolitics, will look to prioritise its long term interests over Biden’s suggestion. The experts, analysts, government officials and ministers of Qatar too signal towards Qatar’s rejection of Biden’s demand.