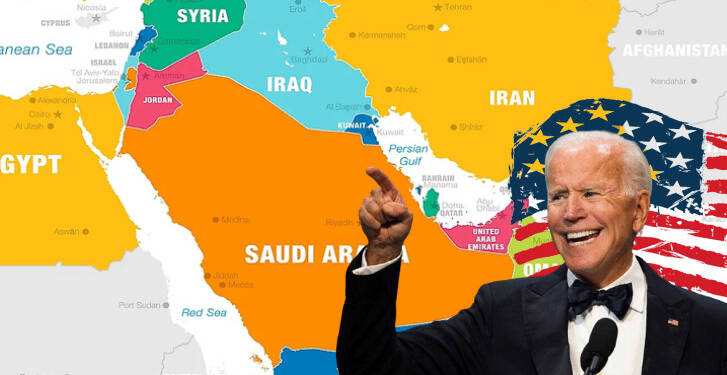 The Biden administration, for quite some time, has been taking policy decisions to provide Iran with sanction reliefs. It is totally opposite to the Trump administration’s policy of curbing Iran and its nuclear program by placing sanctions on it. Though Trump was quite successful in achieving this goal, Biden still reversed it to suit his own agenda. Trump was also quite successful in establishing peace in the middle east through the Abraham accord, but here too, Biden has deteriorated the effectiveness of the accord with his soft stance towards Iran. Iran has already started gaining more economic and military power and reigniting its influence in the region to counter its adversaries like UAE and Saudi Arabia.

Biden’s policies are completely contradictory to Trump’s policies and are creating the risk of reigniting tensions in the Middle East.

Also Read: Biden is reviving the Iran-Qatar bloc to reignite tensions in the Middle East

The Biden administration is dedicated to revive the Iran nuclear deal as well as to remove all the sanctions imposed on Iran. According to the latest reports, the US and its allies are on the cusp of finalizing the negotiations with the Iran officials on restoring the nuclear deal in exchange of sanction reliefs. According to many experts, in a rush to revive the Iran nuclear deal, the Biden administration has stupidly ignored the chances and risk of Iran successfully developing a nuclear bomb. The Biden administration is aware of the fact that Iran has stored enough enriched uranium to make a bomb and is further progressing fast towards more uranium enrichment. Still, they seem to be not so serious about the issue.

Biden’s ignorance towards Iran and his arrogance on his own policies might result in Iran developing a nuclear weapon, which would not just be dangerous for Iran’s regional rivals like UAE, Saudi Arabia and Israel but also for the US itself. Also, the way US is removing sanctions from Iran will result in Iran purchasing more advance weapons from not just US but also from US rivals like China and Russia. This will start a new arms race in the region and propel all the other countries to buy advanced weapons, creating instability in the region.

In April 2021, the Biden administration said that it is proceeding with more than $23 billion in weapons sales to the United Arab Emirates, including advanced F-35 aircraft, armed drones and other equipment. The $23.37 billion package contained products from General Atomics, Lockheed Martin Corp and Raytheon Technologies Corp, including 50 F-35 Lighting II aircraft, up to 18 MQ-9B Unmanned Aerial Systems and a package of air-to-air and air-to-ground munitions.

In November 2021, the US approved a $650m sale of air-to-air missiles to Saudi Arabia. According to the deal, Massachusetts based firm Raytheon would be the principal contractor for the sale of AIM-120C-7/C-8 Advanced Medium-Range Air-to-Air Missiles (AMRAAM) and related equipment.

In a recent white house meeting with Qatari Emir Sheikh Tamim, Biden announced that the US will designate Qatar as a major non-NATO ally. This clearly points towards future defence deals and collaborations between US and Qatar. Also, recently, Boeing, a US-based defence and aerospace manufacturer, signed the biggest aircraft deal in its history with Qatar.

Joe Biden has quite literally opened the doors of the US Military Industrial Complex for the Arab nations. The State Department has cleared a series of potential arms agreements for Saudi Arabia, the United Arab Emirates, and Jordan. Saudi Arabia and the United Arab Emirates will both receive enhancements to their missile defence systems as the Houthis in Yemen have increased their strikes in reaction to the savage war waged by the two Gulf countries in Yemen.

Also, UAE has been given permission to purchase $65 million worth of spare parts for its missile defence systems, which include the Hawk, Patriot, and THAAD. Jordan too received approval from the State Department for a $4.21 billion contract to buy 16 F-16 fighter planes and supporting equipment, including hundreds of different Joint Direct Attack Munition tail kits to improve munitions.

On one hand, Biden is removing sanctions from Iran, making it increasingly aggressive in purchasing advanced weapons and projecting power against its regional adversaries. And, on the other hand, Biden is increasingly selling advanced US weapons to Arab countries for fighting regional conflicts. It is clearly a strategy of Biden to boost US weapon manufacturing and sales. Creating conflicts between Iran and other Arab nations, is the only way US Military Industrial Complex can gain profit from the region. This shows that Biden truly doesn’t care about these Arab nations and is not interested in establishing peace in the region, rather he is just interested in making them fight each other and gain from it.