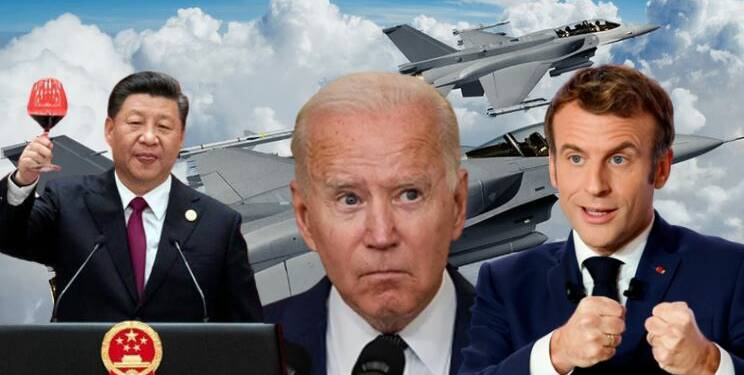 Not so long ago, French President Emmanuel Macron went on his Arabian voyage where he signed weapons and cooperation deals with Saudi Arabia and UAE as well as visited Qatar. This shocked the Biden administration, as Macron ended the Democrat arm-twisting of its Middle Eastern allies, by providing an alternative to F-35s. Now, recently the countries like Saudi Arabia and UAE are also becoming close to the USA’s arch-nemesis Communist China.

Now realising the folly of the decision to back-stab and abandon its allies, Joe Biden has opened the flood gates of weapons and has launched a yard sale of the same. The State Department cleared a series of potential arms agreements for Saudi Arabia, the United Arab Emirates, and Jordan late last week. Saudi Arabia and the United Arab Emirates will both receive enhancements to their missile defence systems as the Houthis in Yemen have increased their strikes in reaction to the savage war waged by the two Gulf countries in Yemen.

The Saudi transaction is valued at around $23.7 million, according to the Pentagon’s Defense Security Cooperation Agency, and comprises of 31 communication and navigation terminals and supporting equipment to strengthen missile defence.

An alienated Saudi Arabia found a friend in Communist China

In what could be the biggest setback for Biden since he came to power earlier this year, Saudi Arabia has reportedly started building its missiles with the help of China, as per US intelligence assessments and satellite images. Satellite images obtained by NBC News too suggest that Saudi Arabia is making its ballistic missiles at a site west of Riyadh.

Jeffrey Lewis and David Schmerler of the James Martin Center for Nonproliferation Studies at the Middlebury Institute said, “The key piece of evidence is that the facility is operating a ‘burn pit’ to dispose of solid-propellant leftover from the production of ballistic missiles.”

This has exposed Riyadh to Iran’s sabre-rattling, especially after the election of an ultra-conservative Ebrahim Raisi as Iran’s President. So, Saudi Arabia feels that it needs ballistic missiles that can carry both conventional explosives and nuclear weapons. Riyadh is therefore wary of Tehran’s nuclear weapon ambitions and is looking to counter them with its missiles programme.

France provides support to the allies that the US abandoned

Before the AUKUS misadventure by Joe Biden, France was really accommodative of Washington’s concerns and wanted to follow a united policy in the areas of common interests. However, after realising that the Biden administration is okay with backstabbing its allies, Macron has decided to take things into his own hand. The Gulf tour of the French President in early December saw a wave of geopolitical re-balancing in the region, as Macron became one of the first western leaders to meet with Prince Mohammed (MBS) in the kingdom since Saudi journalist Jamal Khashoggi was killed.

Read more: After getting UAE on his side, Macron begins his Saudi Arabian adventure

Not only this, but around the same time, Emirati officials told Reuters that the UAE had already informed the US about its decision to suspend discussions for purchasing F-35 fighter aircraft, along with other defence equipment, under a $23 billion deal. This was a follow-up to the United Arab Emirates (UAE) placing an order for 80 Rafale fighter jets and 12 military helicopters, strengthening economic and diplomatic ties with France through a 17 billion euro ($19.20 billion) arms purchase. This proved that the UAE also sided with France.

A flustered Biden is going on a weapon sales Santa Clause

All these developments sent the alarm bells ringing in the weapons industrial complex and forced Joe Biden to open the USA’s weapons garage. The UAE has been given permission to purchase $65 million worth of spare parts for its missile defence systems, which include the Hawk, Patriot, and THAAD. Jordan received approval from the State Department for a $4.21 billion contract to buy 16 F-16 fighter planes and supporting equipment, including hundreds of different Joint Direct Attack Munition tail kits to improve munitions.

Jordan joined the Saudi-led coalition in Yemen in 2015 and is theoretically a member, but it is not as committed to the conflict as Riyadh and Abu Dhabi. President Biden announced one year ago that he was halting “offensive support” for the Saudi-led war in Yemen, a clear backstab to a long-standing ally.

However, backing has persisted in the form of maintenance and arms sales to Saudi jets bombing Yemen. Following recent Houthi attacks on the UAE, the United States has stepped up its involvement in the conflict by intervening to intercept Houthi missiles. In addition, the US is sending a warship and fighter fighters to the UAE.

This support is described by the Biden administration as “defensive.” But in reality, these developments are because of the fact that the USA has become concerned about its influence in the Middle East as well as the slow yet steady decline of US weapons sales in the same region.