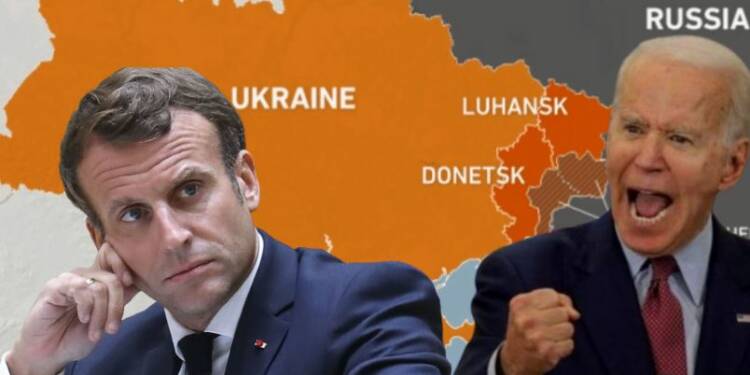 The French President Emmanuel Macron is currently on a diplomatic tour of Russia and Ukraine for peace talks and negotiations over the border conflict. After almost six hours of talks with Russian President Vladimir Putin in Moscow on Monday, Macron arrived in the Ukrainian capital Kyiv on Tuesday to meet the Ukraine’s President Volodymyr Zelensky.

On the other hand, US President Joe Biden, after meeting the German Chancellor Olaf Scholz at the White House on Monday, gave another set of provocative statements. His statements are sure to irritate Russia and provoke Putin for further actions. Also, Biden’s statements show that he is determined to jeopardize Macron’s peace efforts and negotiation talks over Ukraine.

What did Biden say?

After his meeting with the German leader, Biden said, “If Russia invades, that means tanks and troops crossing the border of Ukraine again, then there will be no longer a Nord Stream 2, we will bring an end to it”. He added, “If Russia makes a choice to further invade Ukraine we are jointly ready, and all of NATO is ready”. He also vowed that US and Germany would take a united approach to the rising tensions between Russia and Ukraine.

Pointing out at Russian president Putin, he further said, “I don’t know that he knows what he is going to do”. He added, “I have been very very straightforward and blunt with President Putin, both on the phone and in person: We will impose the most severe sanctions that have ever been imposed”.

In a call with media on Sunday, the officials of the Biden administration said that Mr. Biden would be looking to discuss a package of swift and severe sanctions against Russia, if Mr. Putin decided to invade Ukraine. They also said that Mr. Biden is determined to present a united NATO front in the Ukraine crisis.

Also Read: After being betrayed, an infuriated Zelensky rips into Joe Biden

Nord Stream 2 is an $11 billion natural gas pipeline project being built between Germany and Russia. It has been, for quite long, attacked and used by Biden and his advisers as a coercive tool against Ukraine and other allies, even though the president agreed last year to waive off the sanctions related to the project.

While interacting with the media, French President Emmanuel Macron said that the President Vladimir Putin assured him that Russian forces would not ramp up the crisis near Ukraine’s borders. Before meeting Ukraine’s President Volodymyr Zelensky, Macron said, “I secured an assurance that there would be no deterioration or escalation”.

On Monday, President Putin hinted that some of Macron’s proposals could form the basis of further joint steps. He said, “A number of his ideas, proposals… are possible as a basis for further steps and we will do everything to find compromises that suit everyone”. Putin also said that Russia and France have shared concerns regarding security in Europe. He hailed France saying, “how much effort the current French leadership is making” to resolve these concerns.

While still blaming the west for raising tensions over Ukraine, President Putin said that he was ready for compromise and would look at proposals put forward by Macron. He thanked Macron for coming to Moscow and said that the French leader had presented several ideas worth studying.

Why is Biden giving such provocative statements?

It seems that Biden doesn’t want peace and is committed to instigate war between Ukraine and Russia. Instead of supporting one of his most important and strategic NATO and European ally (France) in its peace efforts, Biden is trying to jeopardize Macron’s efforts by giving such provocative statements. Previously too, he said that US will make sure that Ukraine is included into the NATO, despite of knowing that this statement will provoke Russia for even more aggressive action on the Ukraine border.

All of this points out towards the reality that Biden is now uncomfortable with France leadership in the EU. Biden is afraid of its fading hegemony over Europe. Under the presidency of France, EU is going towards an independent and autonomous foreign, border and defence policy. Also, France is pushing for an EU army, to make it free from US influence and reduce reliance on NATO. All these are making Biden nervous, and thus he is giving such stupid statements against his own allies.