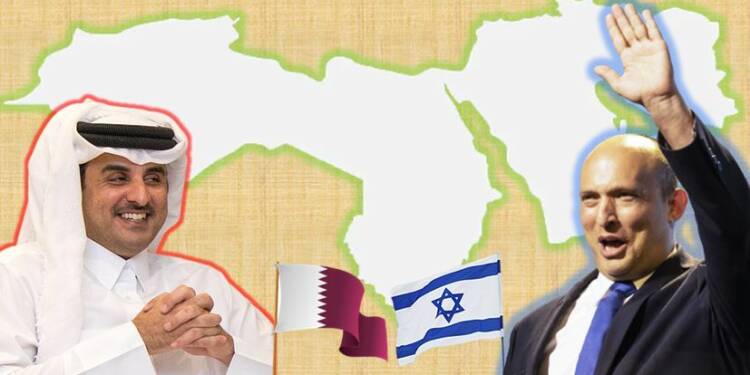 Geopolitical relationship is a marriage of convenience. Forget commitments and promises, what prevails in the end, are interests of one’s own. So, one of Israel’s staunchest enemies—Qatar, is now making friendly overtures to the Jewish nation, to keep its own interests alive and afloat. And if everything goes as planned, Qatar may soon become the latest country to normalize its relations with Israel and sign the Abraham Accords.

Qatar and Israel are sworn enemies. They don’t share diplomatic ties. But this relationship is changing. Consider the recent diamond trade pact between the two countries. Qatar will now welcome the Jewish diamond merchants on its soil. The Qatari government will help Israeli diamond traders to set up an official presence in Qatar. But, why? Why does Qatar need to placate Israel before entering into the diamond trading arena?

Well, Qatar wants to become a hub of diamond trading activities in the Gulf region. Qatar is banking on large diamond reserves in Africa to set itself as a diamond bourse or a trading establishment in the region. Recently, the UAE introduced 5% taxation on diamond purchasing.

So, Qatar wants to capitalize on its tax-free diamond market to lure customers from the whole of the Gulf region. To materialize its ambitions, Qatar needs to become a member of the World Federation of Diamond Bourses. It also needs to be in the good books of the Kimberly Process Committee, which regulates the global diamond market. Interestingly, Israel and the UAE are two of the most influential members of the Kimberly Process committee.

Qatari diamond trade ambitions and an opportunity for Israel:

Three and half years ago, when Qatar requested the World Federation of Diamond Bourses to convene the Kimberly Process Committee, it was vetoed by Israel with help from the UAE. Six months ago, Qatar again brought the issue of establishing their own diamond bourse to the Kimberley Process committee.

But it was not vetoed by Israel this time. Instead, Israelis saw an opportunity here. They wanted to continue the momentum of the Abraham Accords. Israelis didn’t want a full-fledged relationship, but a mere diplomatic engagement would have sufficed.

Subsequently, the Saudi bloc and Qatar reconciled in January this year, paving way for the UAE to withdraw its objections. Contacts between Israel and the Arab kingdom of Qatar became direct. And now both countries have formally announced their first-ever trade pact after the decade-long diplomatic crisis.

Why does the rapprochement between Qatar and Israel matter?

But why is this rapprochement significant? Mind the fact that Qatar is alleged of funding terror activities in Iran and the Hamas-ruled Gaza. Israel considers both Iran and Hamas its existential threats. If Qatar and Israel become friends, it will spell a disaster of epic proportions for Israel’s adversaries in the region.

But this may soon turn out to be a reality. The Arab world would like to have Qatar on its side to exert maximum pressure on Iran to give up its nuclear dreams. Hence, Qatar has suddenly emerged as a top foreign policy priority for the Saudi bloc.

Similarly, French President Emmanuel Macron, and a very good friend of the UAE and Israel, also visited Qatar this month. Macron stressed during the visit that Qatar is a strategic partner of France. Two MoUs regarding French investments in Qatar were also signed during Macron’s visit to Doha.

All in all, Israel’s message to the Arab kingdom of Qatar is very loud and clear: mending ties with the Jewish nation will prove to be a boon for the Qatari economy. Israel is a tech-powerhouse of the world, and the trade ties between the Arab countries and Israel has spectacularly strengthened over the last year. Longing for better economic and diplomatic clout in the Arab world, Qatar won’t really mind ditching the Iran-Turkey bloc for a worthy trade partnership with Israel and the UAE.

Qatar and Turkey on a collision course:

This became evident when US giant ExxonMobil and Qatar Energy this month signed a contract for oil and gas exploration and production-sharing off the divided island of Cyprus, in spite of Turkey’s opposition. Erdoğan’s Turkey is now miffed at this development, which has vehemently criticized this consortium.

For Qatar, business interests are paramount. And to preserve the business interests, mending ties with Israel and the UAE becomes a necessity. And in the process, Qatar may soon join the list of Abraham Accord countries by establishing full diplomatic ties with the Jewish nation of Israel.