By debt-trapping Pakistan, Saudi Arabia has killed three birds with a single stone 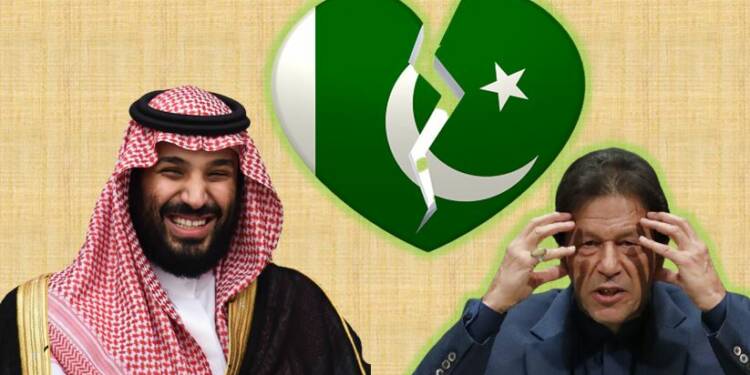 Saudi Arabia is showing how the Arabs can use all their economic might and offensive amount of wealth as a diplomatic weapon. To put it bluntly, Riyadh has debt-trapped Pakistan and is pursuing three objectives with its impressive diplomatic move:

Pakistan’s central bank and the Saudi Fund for Development (SFD) have signed a $4.2 billion deal. Under this deal, Riyadh will provide $3 billion in safe deposits and $1.2 billion of oil supplies to Islamabad on deferred payments.

Pakistan is a long-term ally of Saudi Arabia. In fact, alliance is not the right term to define the Pakistan-Saudi Arabia leadership. Pakistan acts more like a beggar surviving on Riyadh’s alms and often borrows Saudi money and oil supplies on deferred payment basis.

Also read: Saudi Arabia will sign the Peace Deal with Israel, but only after it makes a needy Pakistan do it

Of late, the relationship between Saudi Arabia and Pakistan has however got uneasy. India abrogated Article 370 of its constitution in 2019, thereby scrapping special status for its Union Territory of Jammu & Kashmir. Pakistan’s diplomacy has been traditionally Kashmir-focused and Islamabad tries to stake claim on the Indian territory.

However, Arabs and India share an evolved and close relationship. And since abrogation of Article 370 was India’s internal matter, Riyadh ignored Pakistan’s calls for condemning the abrogation. This ended up embittering Pakistan-Saudi relations, and Islamabad went as far as befriending Turkey and Malaysia with an eye on Kashmir.

Turkey, under President Recep Tayyip Erdoğan, has tried to position itself as the guardian of all Muslims across the world. However, Saudi Arabia and Turkey don’t share a great relationship, as Riyadh understands that Ankara wants to take over the leadership of the Muslim world from Saudi Arabia.

Whenever Saudi Arabia felt that Pakistan was trying to join hands with Malaysia and Turkey to find an alternative to Riyadh-led Organisation of Islamic Cooperation (OIC), it weaponised its loans and other financial instruments against Islamabad. This is how Saudi Arabia kept Pakistan from abandoning Riyadh and landing up in Ankara’s lap.

Now, Saudi Arabia has managed to pile the pressure of billions of dollars on Islamabad. The latest deal also specifies that in case of sovereign default, Saudi Arabia can ask Pakistan to return the money on a notice of three days, with or without providing any reasons. There is no rollover option, and the loan has to be returned after one year.

So, if Islamabad is found hobnobbing with Ankara, Riyadh can ask it to return all its money. This forces Pakistan to toe Saudi Arabia’s line in international relations.

Keeping Turkey away from leadership of the Muslim world

Saudi Arabia has broken through the growing Pakistan-Turkey camaraderie. Turkey keeps supporting radical Islamist militant groups like the Muslim Brotherhood and the Islamic State. With the help of militias, Turkey has tried to shore up its own influence in war-torn countries like Libya and Syria. This is why Saudi Arabia and its Arab allies, along with Israel, perceive Turkey as a serious threat.

In fact, Turkish President Recep Tayyip Erdoğan has been repeatedly positioning himself as the defender of the Muslim cause. In December 2019, Ankara even participated in the Kuala Lumpur summit, which was a brazen attempt to create an organisation parallel to the Saudi-led OIC.

Also read: Hilarious but True. Pakistan is trying to do a coup in Saudi, and it thinks it can really pull it off

In order to muscle its way to the top in the Muslim world, Turkey was using a sentiment of bonhomie with Pakistan. However, Saudi Arabia has now trapped Pakistan and due to its severe economic crisis, Islamabad will not be able to support Ankara’s ambitions. This effectively means that Turkey won’t be able to lead the Muslim world.

Warning to the United States

As soon as US President Joe Biden came to power, he was clear about one object — antagonising the Arabs. Biden started weaponising his human rights agenda, and despite the traditionally close US-Saudi relations, the US President has been using the murder of journalist Jamal Khashoggi as an excuse to undermine US-Saudi relations.

However, Saudi Arabia is now in a position to wield the China threat. Pakistan and China are all-weather allies, and when an angry Riyadh had asked for a loan repayment from Pakistan in May last year, the communist nation had come to Islamabad’s rescue for returning $1 billion immediately to Saudi Arabia.

Also read: As Saudi and UAE abandon Pakistan, China has a real shot at making it an Unislamic Chinese colony

Now, by giving another loan to Pakistan, Saudi Arabia is in a position to befriend America’s main rival — China. Riyadh won’t actually befriend China, but it won’t mind keeping Biden on the edge and getting the US President to behave properly.

By debt-trapping Pakistan, Saudi Arabia has thus killed three birds with one stone.

After ditching China, Lithuania to emerge as the biggest semiconductor hub in Europe